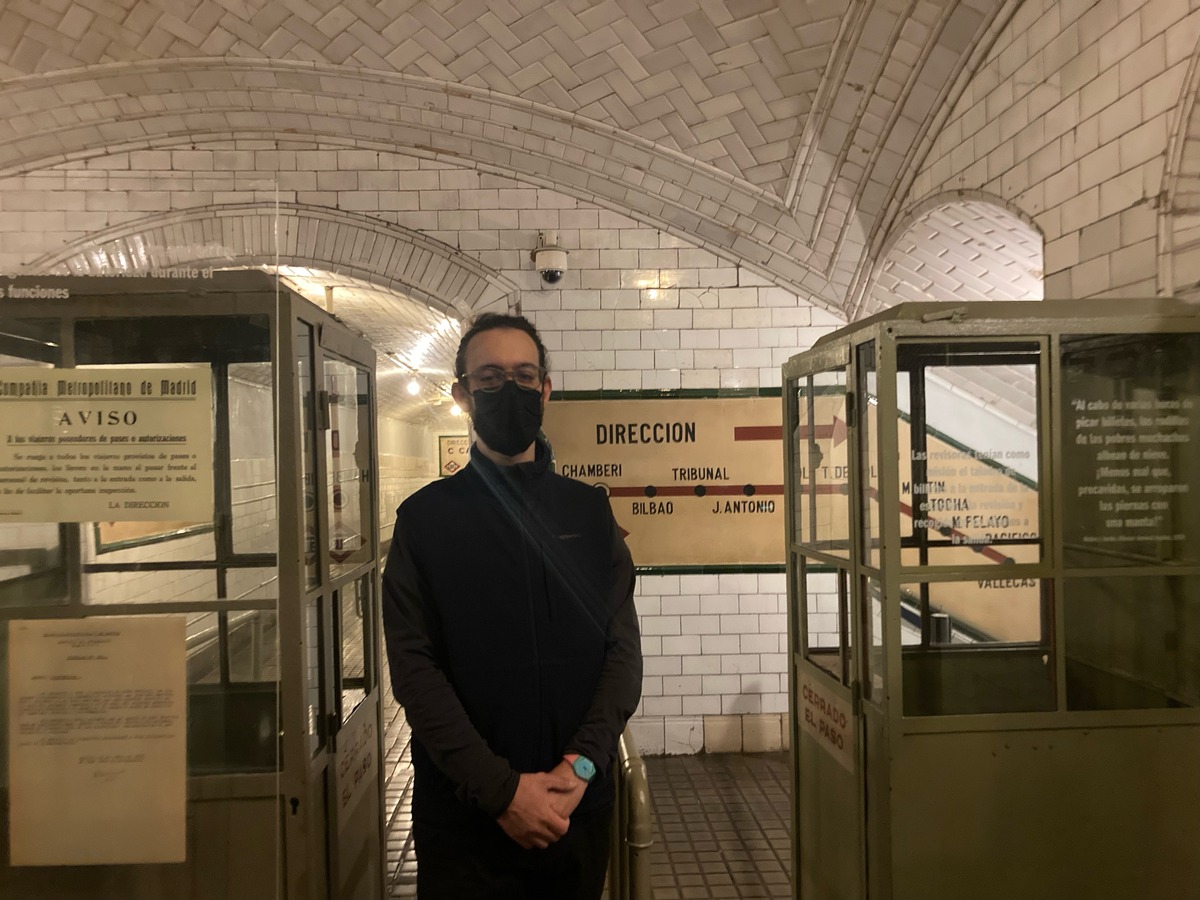 Madrid’s metro keeps the bustling city functioning smoothly, but most commuters don’t know about the Chamberí ghost station. So Javier Garrido Garde takes visitors on a tour of a largely forgotten part of Madrid's history.

Madrid, long known mainly for its architecture, vibrant nightlife, and electric food markets, has the sixth longest metro system in the world. And if you’ve ever taken a ride on Line 1, particularly between Bilbao and Iglesia, and thought you saw a blurry, abandoned-looking station while peering out the window, you weren’t mistaken.

You were looking at the defunct Estación Chamberí, one of Madrid’s first metro stations, which has been converted into a museum for those interested in its extensive history.

Javier Garrido Garde, a Chamberí expert, leads tours throughout the ghost station every Friday, Saturday, and Sunday, and has a lot to say about this mysterious underground space filled with remnants and stories from Spain’s past.

You are probably wondering why Chamberí no longer exists on Line 1. The answer is that the station — located in the middle of a continuous curve between Biblao and Iglesia — couldn’t safely accommodate trains once more cars were added to them.

“At the start, the platforms [were only 60 meters long and could accommodate] four cars. Then, at some point at the end of the 1950s when more people started riding the metro more, 30 more [meters] were added [to the platform], which is more two cars per train,” Garrido Garde said.

“The train was going to be heavier and therefore in need of more speed. The break system couldn’t properly stop the train on the new platform because of its speed. So May 21, 1996 was Chamberí’s last day as a [functioning] metro station.”

Garrido Garde studied art history in Zaragoza, the capital of Spain’s Aragon region, and then moved to Madrid two years ago. In an attempt to find a job related to his studies, he discovered Chamberí and was fascinated by its history. After reading about it to prepare for an interview, he said he simply “couldn’t imagine how many things happened there.”

During the height of the Spanish Civil War in the late 1930s, Madrid’s metro stations operated as shelters for residents seeking safety from bombings. The Reina Sofia, one of Madrid’s larger and more renowned art museums, is home to photographs taken by Spanish photographer Juan Miguel Pando Barrero of innocent citizens huddled inside the Chamberí station.

The Chamberí ghost station also attracts people interested in its architecture since it showcases the first model for a metro station — platform included. Garrido Garde explains on his tours a tidbit from 1919.

“There was the beautiful train station of Atocha, but there was nothing underground,” he said. “Antonio Palacios and Joaquin Otamendi, two Spanish architects, worked diligently to provide all necessary facilities.”

Garrido Garde shed light on the difficulties of embarking on such a new and grand project by including another detail from that year. “It wasn’t normal to go underground, [so] natural light was used for every task during the week,” he said.

Since Madrid’s metro system is used by millions daily, specific stations hold special memories for travelers. Garrido Garde believes his favorite part of the job is getting to see the look on a visitor’s face when they see a place they used as a child. “It’s amazing,” he said. “They get to really remember a good moment.”

So with the name Chamberí ghost station, you might wonder if any paranormal activity occurs there. Garrido Garde said you are not alone because four or five people ask him that same question every weekend. Although he looks out onto the platform and doesn’t see any ghosts at the end of the workday, who’s to say they don’t come out after hours?