In case you were worried about the fate of Gogo — after losing an important future partner in Virgin America (which just went with ViaSat) and a rough few months with American (which may or may not be trying to wrangle out of its contract) — fear not. Delta just increased its commitment to equip its fleet with Gogo’s next generation 2Ku technology,  doubling down from 350 aircraft to 600.

It’s a resounding win for Gogo and for 2Ku technology, which promises the end of the era of glacial inflight Internet.

Meanwhile, Gogo’s shares on NASDAQ jumped by 10% in after-hours trading. Looks like they are in it for the long haul.

Congrats to @Gogo & @Delta on today’s 2Ku contract announcement. I’ve experienced 2Ku first hand. We threw everything at it. #AvGeekApproved U.S. Airline Profits Surge to Record Levels As Fees Increase: U.S. airlines reported after-tax profit of $25.6 billion in 2015, a gigantic increase from the $7.5 billion profit reported in 2014, according to the U.S. Department of Transportation’s Bureau of Transportation Statistics. Read more at Skift 3 Ways of Rethinking the Premium Airport Lounge: What was once an easy, membership-based place for business travelers to knock back a whiskey and make a few pre-flight calls has moved into a much more important place. The lounges, especially at the standard displayed by some of the world’s best carriers, are difficult and expensive to execute well, but are integral to an end-to-end brand experience. As the spaces continue to evolve, there are a few interesting trends to observe in the market. Read more at Skift 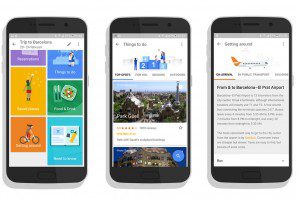 Google’s New Travel App Is a Mashup of Guidebook and TripIt: Google’s new travel app, Google Trips, mines Gmail for your reservations and pairs them with city guide-like information, things to do and attractions in travelers’ upcoming destinations. Read more at Skift

Hotels Use Instagram Communities to Curate Travel Guides for Guests: As buzz words like “local” and “authentic” are used to describe nearly every travel experience these days, marketers are turning increasingly to social media, and to residents themselves, to come up with the content that enables other travelers to have those very kinds of experiences. Read more at Skift

Limited Corporate Travel Growth Is Sabre’s Biggest Issue in North America: Sabre Corp. executives reported that corporate travel bookings were essentially flat in the first quarter of 2016, and there’s no evidence yet of stronger growth to come this year. Read more at Skift Hyatt CEO Hints at More Deals to Come: Chicago-based Hyatt Hotel Corp. may not have succeeded last year in reportedly attempting to acquire Starwood Hotels & Resorts, but if the company’s first quarter 2016 earnings call was any indication, it’s clear the company is eager to both sell and buy new properties and perhaps, brands, going forward. Read more at Skift

InterContinental Is the Latest Hotel Company to Jump Into the Direct Booking Wars: InterContinental Hotels Group has officially joined its fellow hotel competitors in the direct booking wars against the online travel agencies. Read more at Skift

Starwood Beats Estimates in One of Its Last Quarters as an Independent Company: Starwood’s first-quarter results beat Wall Street’s expectations, and the lodging company boosted its full-year earnings forecast. Read more at Skift