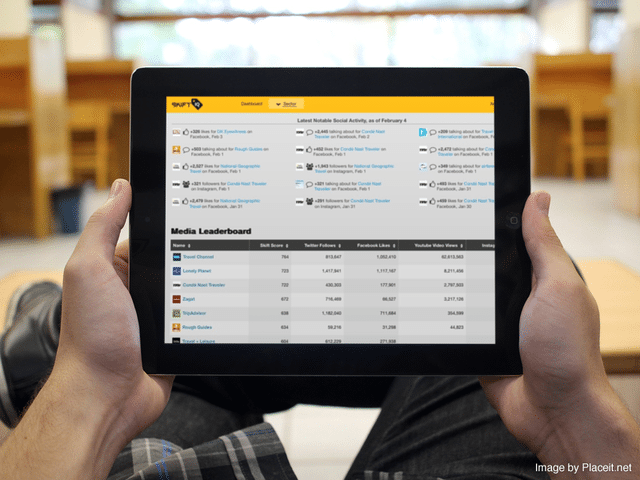 Becoming part of the conversation along the road from inspiration, to booking, to travel, and then back again is essential for any successful travel media brand.

Editor’s Note: In the first version of this story, we left out Matador Network. As you can see from the rankings, below, that was a mistake.

SkiftIQ covers the social media activity of over two thousand travel brands and of that, more than five dozen are travel media brands like Lonely Planet, Travel + Leisure, and Matador Network. Using Skift Score, an independent performance indicator, we’re able to judge the performance of these brands not just by numbers, but by the types of interactions they have with users and the conversations in which they participate.

By that metric, Matador Network is the most successful media brand on social media. Although its numbers in any of the four categories that we track do not rise to the level of first place, its mix of activity and heightened level of interaction with users through conversations, retweets, and shares, gives it the edge over its peers.

Travel Channel totally dominates YouTube, with over 62 million views. That makes some sense, as it has uploaded nearly twice as many videos (nearly 1,400) as its nearest competitor Rick Steves (757 videos). The one-man travel brand has a respectable 16 million views — double that of the guidebook giant Lonely Planet.

The most viewed videos from Travel Channel come from the station’s Man Vs. Food series, with a clip of a giant hamburger in Detroit getting nearly 2 million views.

Views don’t always translate into favorability. Despite its numeric dominance, Travel Channel’s videos are ranked 17th using YouTube’s approval rating. The most approved videos come from Fathom, which punches far above its weight on social media.

National Geographic Traveler leads Facebook and Instagram in terms of likes and follows. Considering the brand’s photographic legacy, it’s somewhat to be expected. But NGT’s Facebook activity isn’t a one-way street. It pushes contests among contributors and then reposts images on its accounts.

The brands does the same on Instagram, where it routinely promotes hashtags such as #natgeotravelpic and then repost the image on the National Geographic Traveler account.

“We are very fortunate to have the power of the National Geographic brand behind our Nat Geo Travel social media accounts,” says Carolyn Fox, Digital Travel Editor. “On Facebook, we’re looking for engagement, not just followers. On Instagram, we provide access. Our staff and photographers present views – both professional and amateur – of all different parts of the world.”

Lonely Planet has long been a leader on Twitter, and it hasn’t slipped in recent years. It doesn’t tweet the most often — it’s ranked 11th between Tripatini and National Geographic Traveler — but it adds more followers per day than any other media brand than TripAdvisor.

It’s also much more likely to respond to users than other brands: It’s average response time is 3 hours, while the sector average is 21 hours, and almost 18% of its tweets are responses.

Conde Nast Traveler has been making a strong push on social media fronts. Out of 15 activity spikes tracked by SkiftIQ over the past five days, CN Traveler was responsible for seven — split between Facebook activity and a rapid increase in Instagram followers. This focus on social is happening in tandem with a scheduled relaunch of the print version of the magazine in late February.