Whether HQs are phased out due to cost-cutting, restructuring or a genuine desire to adopt remote work policies, the net result is the same: more people looking for spaces to collaborate.

British Airways is now considering selling its Waterside headquarters in the UK, which is located next to Heathrow Airport. There are also reports Amadeus has put its data center in Germany up for sale, while Accor is still hunting for a buyer for its iconic Paris HQ.

British Airways’ decision to look at selling the 9,000-square-metre site comes as carmaker Ford prepares to redesign its own offices for a mix of hybrid workers. In North America, its 30,000 employees will be given a chance to work remotely if they don’t have site-dependent work to complete.

IAG, the parent company of British Airways, has been dealt a devastating blow by the pandemic. On March 18, it said it planned to raise about $1.2 billion through a bond issue, strengthening its finances to help it survive the pandemic in case the travel downturn lasts longer than expected.

But the official line for the HQ disposal is a shift towards flexible working.

“The global pandemic has shown us that many of our colleagues enjoy working remotely and want to continue, and this has accelerated our approach to offering more agile and flexible ways of working,” a spokesperson told Skift.

“Our aim is to find a hybrid working model that suits our business, blending the best of office and remote working for our people. We’ve also restructured our business to emerge from the crisis and are considering whether we still have the need for such a large headquarters building.”

In August 2020 it announced it wanted to sell its HQ as part of a restructuring. It bought the building, near Paris in Issy-Les-Moulineaux, in 2016 for $430 million.

“The Paris HQ still up for sale,” a spokesperson said. “But this is not linked to remote work, nor the pandemic. It is more about value crystallization and pursuing our asset-light strategy.”

The spokesperson added it wasn’t in a rush to complete the transaction given its strong liquidity of more than $4.7 billion at the end of its 2020 financial year. However, it did post a $2.4 billion annual loss.

Accor has also removed its regional headquarters, but this is “linked to group simplification and adapting the organization to its asset light business model,” the spokesperson added, with no sales of buildings involved. 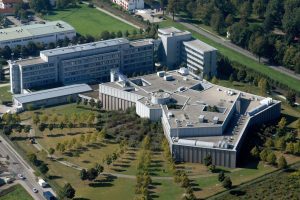 As for Amadeus, reports of a potential sale of its data center site come as the company embarks on a partnership with Microsoft that is based around cloud computing. As a result, there may be less need for its Erding site.

The report says Amadeus could lease back the site after any sale. Skift approached real estate company JLL, which is reportedly marketing the site, but it declined to comment.

“For now, our data center will continue operations business as usual to ensure that our customers receive the same level of service during the migration period, however long it may take,” an Amadeus spokesperson said. “While the nature of certain activities/roles may change we will still need technical and engineering teams, that are currently based in that site, to oversee the stability and functioning of our systems hosted in the public cloud.”

There’ll likely be more remote work announcements over the coming months, as companies survey their employees and government protection for some commercial tenants expires.

“Probably by the second half of the year, we might start seeing more decisions by businesses as to how they absolutely cut costs,” said Simon Loh, chief operating officer, UK at IWG, which owns brands including Regus and Spaces. “That is front of mind for everyone. But how do they support employees and new recruits? A lot of people won’t take jobs without that flexibility. There’s a market demand.”