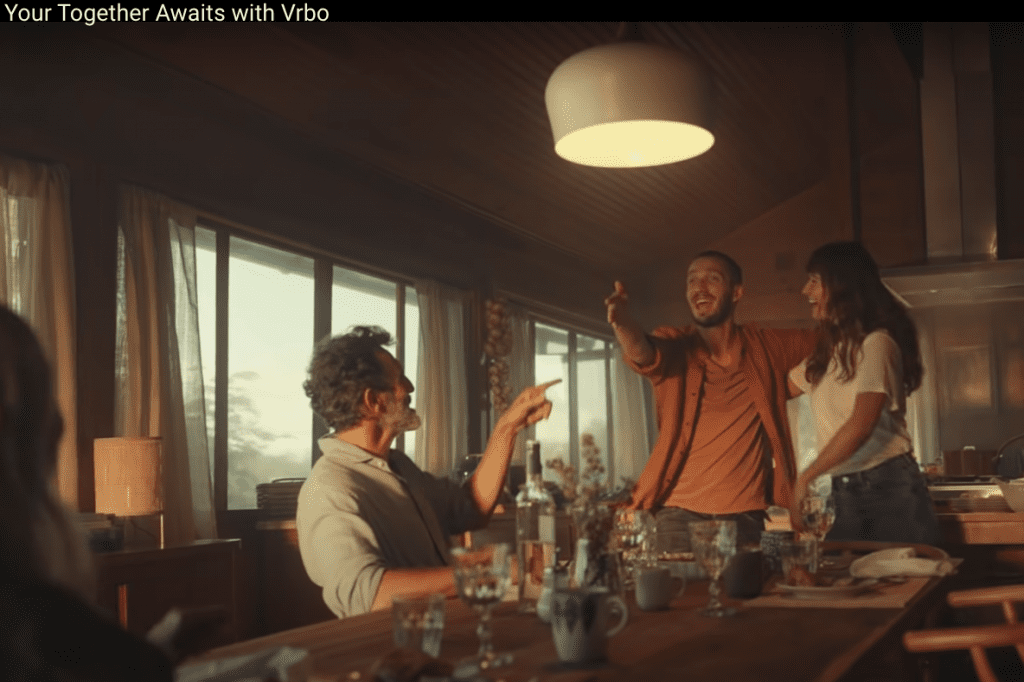 Sister brands Vrbo and Expedia are being opportunistic in getting relatively aggressive about U.S. TV advertising early in 2021 when rival brands are standing down. You can debate whether it is smart or risky given the pandemic backdrop.

In the first three weeks of 2021, vacation rental brand Vrbo and sister company Expedia.com have dominated U.S. TV advertising among online travel agencies with a common message about the allures of vacation “togetherness.”

Travel websites spent an estimated $9.9 million on U.S. national TV advertising in more than 4,700 airings in the first 20 days of 2021, according to statistics from TV analytics firm iSpot.tv. That represents an 81 percent plunge in estimated spending and a 79 percent decline in airings compared with January 1-20, 2020, when Covid-19 was little-known except for in China. Here’s the leader board from January 1 to 20, 2021 in U.S. TV advertising in terms of the key advertising metric, impressions, according to iSpot.tv.

Instead of Vrbo, Expedia and Costamar Travel being the top advertisers, during the comparable three weeks to start 2020, it was Booking.com that dominated online travel advertising spend on U.S. television, followed by a quartet of Expedia Group brands, namely Trivago, Expedia, Vrbo and Hotels.com.

The willingness of Vrbo and Expedia to spend substantial — albeit at diminished levels of —money on U.S. TV during the second wave of the pandemic is an opportunistic move in the sense of being ready to take some market share when competing brands such as Booking.com, not to mention Airbnb, are relatively silent. Last year, during the third quarter, when a nascent recovery was taking place, it was Booking.com that took share in metasearch auctions when Expedia stood down.

One can argue that spending totals at this juncture of the pandemic are less than meaningful. The real gains or losses will take place when throngs of people can travel again, and big advertising spenders unleash their budgets.

Advertising now can also be risky from a brand perspective because these companies could be subject to backlash from critics who deem travel advertising at this juncture of the pandemic as being inappropriate.

The top TV advertisement among travel websites during the first three weeks in January by impressions, was Vrbo’s “Your Together Awaits with Vrbo.”

After showing a series of potential family experiences, the key line is: “These are the Vrbo vacation homes waiting for you to fill with your family. Your together awaits. Find it with Vrbo.”

There is some fine print in the advertisement about the necessity of following travel and safety guidelines.

Expedia’s “Every Trip You’ve Been Dreaming Of,” was a close second and likewise built on a “togetherness theme.

“For every trip you’ve been dreaming of, Expedia has millions of flexible booking options,” the advertisement says. “Because the best trip is wherever we go together.”

Unlike the Vrbo and Expedia spots, Costamar Travel prominently displays its phone number as well as its website address.

Costamar Travel’s Ofertas de Locura advertisement was a distant third with 9.7 million impressions, compared with some 370.3 million for Vrbo’s spot and 352.5 million for Expedia’s advertisement.

This Spanish-language advertisement, which means “Crazy Deals,” touts flight and hotel packages from Miami and New York to destinations such as Mexico, the Dominican Republic, and Peru.

The ad has fine print about the ability to rebook and highlights having flexible rates.

The three brands are seizing an opportunity to generate revenue and proselytize for their brands while competitors lay low.

Photo credit: Vrbo's TV ad, "Your Together Awaits With Vrbo," was the top online travel agency spot in impressions on U.S. TV during the first three weeks of 2021, according to iSpot.tv.