Large travel corporations can't seem to get enough of the tours and activities space. It's one to watch as the year unfolds. Deals can be a great way to get a foot in the door, but don't forget to make sure there is a strategic fit — and, of course, that the price is right.

Travel’s tours and activities segment has been on quite a ride lately, attracting new suitors looking to invest or to snap up companies outright.

Two back-to-back acquisitions shook up the space last week as Booking Holdings acquired FareHarbor and the very next day TripAdvisor purchased Bokun. This follows a slate of deals such as Mr. and Mrs. Smith’s purchase of SideStory, the sale of Hotelbeds’ destination management unit to TUI, and Marriott’s investment in PlacePass.

It’s not just M&A either; the hits have been coming fast on the venture capital side as well with tours and activities startups raising at least $80 million so far this year. That builds off of 2017 when GetYourGuide raised $75 million and Klook raised $60 million in a tight contest to close the largest VC deal in the history of tours and activities.

So what’s going on in highly-fragmented tours and activities to create all this activity? Skift Research analyzed the space using proprietary insights on the state of tours and activities, including a breakdown of online tour platform inventory, affluent traveler spending, and venture capital investment trends.

Skift Research sees three main drivers of investments and acquisitions in tours and activities. First, the sector has strong internal growth dynamics, in part driven by consumers shifting to experiences over things. Next, while the sector is still mostly offline, that is is rapidly changing due to a shift reminiscent of the early days of online hotel and airline booking. Lastly, all of these changes are happening at a time of consolidation for the largest, hyper-competitive global travel brands. These corporations are also beginning to shift business models toward a full-service platform approach. We examine each trend more closely below.

1) The inside view: strong growth dynamics within the tours and activities sector

The tours and activities segment represents an addressable market of $160 to $180 billion and growing, according to research analysts at investment bank SunTrust Robinson Humphrey, making it one of the largest opportunities in travel.

Skift believes that tours and activities are seeing above-market growth rate because of changing consumer behaviors such as the increasing premium that travelers place on activities and experiences over more traditional amenities.

The latest data point, among many others, comes from Skift Research’s 2018 U.S. Affluent Traveler Survey of a key demographic that has an outsized impact on the travel industry. High-income travelers make up just 20 percent of the total U.S. population but account for 51 percent of U.S. travel-related spending.

We found that 67 percent of affluent travelers would rather spend their money on activities than on a nicer hotel, up eight percentage points from last year. A similar number of such travelers prioritize new experiences over relaxation. Three-quarters of high-income travelers have participated in at least one organized tour or activity. 2) Understanding the online landscape for tours and activities

Currently an arms race is under way in online tours and activity booking as 1) a critical mass of supply has recently become bookable online, 2) companies have begun to figure out how to generate demand, and 3) commissions are surprisingly high on many of the products.

Only about 20 percent of in-destination inventory is bought online today worldwide on average. This compares with the overall travel ecosystem, where 44 percent of purchases are made online according to Euromonitor, and suggests the massive growth potential for online tours and activities marketplaces.

To understand the online tours market as it stands today, Skift Research conducted a proprietary analysis of tours and activities inventory on six major online distribution platforms, Viator, Expedia, Airbnb, GetYourGuide, Klook, and Peek, to gain a general sense of regional listings and approximate current market shares. For all six sites, we compared how many listings were offered to consumers across 100 of the most popular tourist destinations worldwide. To make valid comparisons, the same set of cities was used on each site. We collected information for publicly available, English-language listings as of February 2018. Skift collected data on nearly 70,000 activities. Although not a complete sample, we believe our dataset represents nearly 40 percent of all tours available on these six sites.

Our analysis largely corroborates Skift’s previous reports that Viator/TripAdvisor is in pole position when it comes to online attractions. It has the largest number of tour listings, more than twice as many as its next closest competitor. We estimate that Viator has nearly 55 percent market share worldwide for the 70,000 online listings that Skift Research collected. Our analysis does not account for overlapping inventory on multiple platforms.

Exhibit #2: Viator had the highest number of online listings globally that we collected 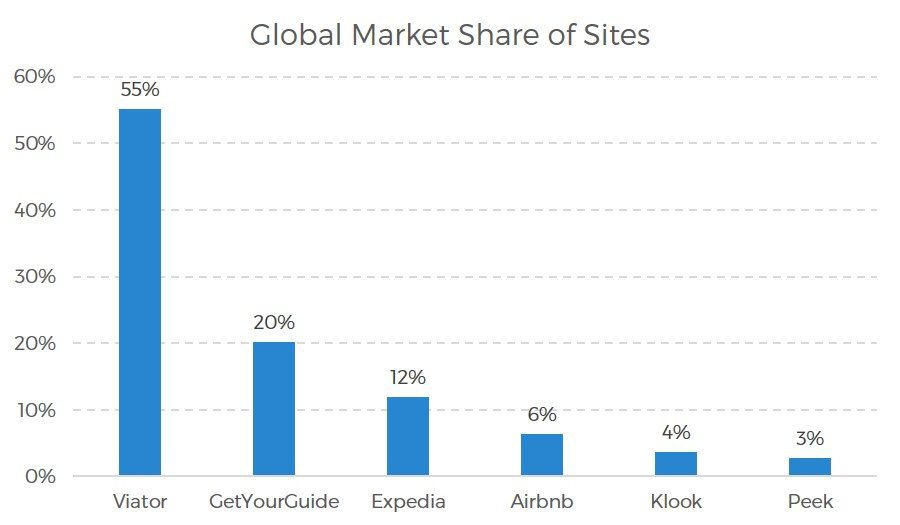 That doesn’t mean the game is over yet. Viator will have to fight to stay in the lead, as our data also shows. For instance, many platforms see an opening to compete by being regional specialists. Klook is clearly positioned as an Asia expert, for example. It has 70 percent of its listings on that continent. GetYourGuide is tilted heavily towards Europe, which accounts for 57 percent of its inventory. Peek has a similar concentration in North America.

These regional specialist sites are also more likely to put a vetting process in place so that their platforms offer only higher quality tours. We recognize that one of the main limitations of our analysis is that it evaluates quantity over quality. The smaller platforms are more likely to offer a curated selection of tours, and so our analysis cannot fully take some of their advantages into account.

3) The outside view: consolidation and a push into experiences at global travel corporates

With tours and activities rapidly growing and a whole host of companies moving online, the final ingredient for M&A is a willing buyer.

Booking Holdings and Expedia Inc. led an $11.5 billion wave of M&A in the online travel agency space from 2013 through 2015. This includes Expedia’s acquisition of HomeAway, Orbitz, and Trivago and Booking Holdings’ (then Priceline Group’s) purchases of OpenTable and Kayak. Also notable, though of smaller size, was TripAdvisor’s 2014 pick-up of Viator. The result is that the online travel agencies now have a much wider product offering — hotels, airlines, alternative accommodations, car rentals, and restaurants — than ever before. They hope that this increased breadth will bring economies of scale to their platforms. More travel products bring greater consumer demand onto their platforms, which in turn attracts new suppliers and gives the OTAs greater pricing power. Greater supply at a lower price brings even more consumers to the platform, and the cycle repeats itself.

At least that’s the theory. In practice, these deals can be costly and bring with them a whole host of technical and cultural integration challenges. These three travel companies flipped from holding a cumulative net cash position of $4.5 billion in 2012 to a net debt position of $5 billion by 2015. That seems to have brought the spending spree to an end in 2016 and 2017. But given some time to digest, are deals back on the menu for the OTAs and Metasearch players?

We believe it likely that deal-making will continue in the tours and activities sector. Booking Holdings is still on the road toward going full service, as CEO Glenn Fogel recently told Skift, and given its lagging position in tours and activities, M&A could help give it a boost. TripAdvisor’s CEO Stephen Kaufer has called out attractions as a “strong performer” where he expects to see continued growth and according to Dermot Halpin, president, TripAdvisor Attractions and Rentals, the tours, activities, and experiences sector represents the company’s second largest long-term growth opportunity (after hotels). Expedia remains a strong player, with the second largest online tours platform while Airbnb has been actively expanding Experiences. Even traditional hospitality companies like Marriott have expressed an interest in experiences.

Rather than acquiring customers, online sites will likely face a greater challenge acquiring suppliers, many of which are daunted by the perceived complexity of listing on online marketplaces. 55% of tour and activity suppliers do not have a third-party reservation system, and, of those that don’t, 67 percent use tools like email to manage bookings.

That might explain why the latest two deals with Booking and TripAdvisor were business facing, rather than customer facing. However, Skift questions whether the open platform technologies of Fareharbor and Bokun can continue to grow now that they are owned and influenced by such large distribution businesses. Given conflicts of interest that might arise, it seems likely to us that most of the value from these deals will come from supplier relationships. That would help explain why TripAdvisor effectively demonetized Bokun immediately after acquiring it. It might also make it challenging for B2B businesses to find exit opportunities in the future.

More deals seem likely in the tours and activities space

Skift Research believes that those looking to compete on in-destination activities will likely focus on filling in the gaps in their regional inventories, as some of the larger companies have better inventory and demand in certain regions.

Some of this will be done through acquisitions, but there are also attempts to grow supply organically. For instance, Expedia is in the process of migrating its existing suppliers to a new platform, after which they will open up to new operators who wish to directly upload their tours and activities.

It’s also possible that we see a ‘merger of equals’ among small- and medium-sized players to build scale. While activity is likely to vary by region, Eric Gnock Fah, president and co-founder of Klook believes that “Asia’s tours and activities supply will start to consolidate, giving rise to larger brands in the travel space.”

However, the consolidation picture looks different for the on-the-ground operators of activities. Jen O’Twomney VP of Expedia Local Expert does not see much consolidation across the supplier base. Instead, she said, “I think what you’re going to see more of is actually more suppliers as opposed to less as we expand the total market with more peer-to-peer. I actually don’t expect fewer suppliers. In the next five years I expect more suppliers.”

It’s still to early to call the winner yet, but what does seem clear is that tours and activities bookings will continue their shift to online and mobile. As the large global corporates show a continued interest in experiences, further deal-making could well be the result.

Photo credit: Companies that arrange tours and activities, like this one at Trevi Fountain in Rome, are been on a tear recently through fundraising and acquisition deals. Lorenzoclick / Flickr