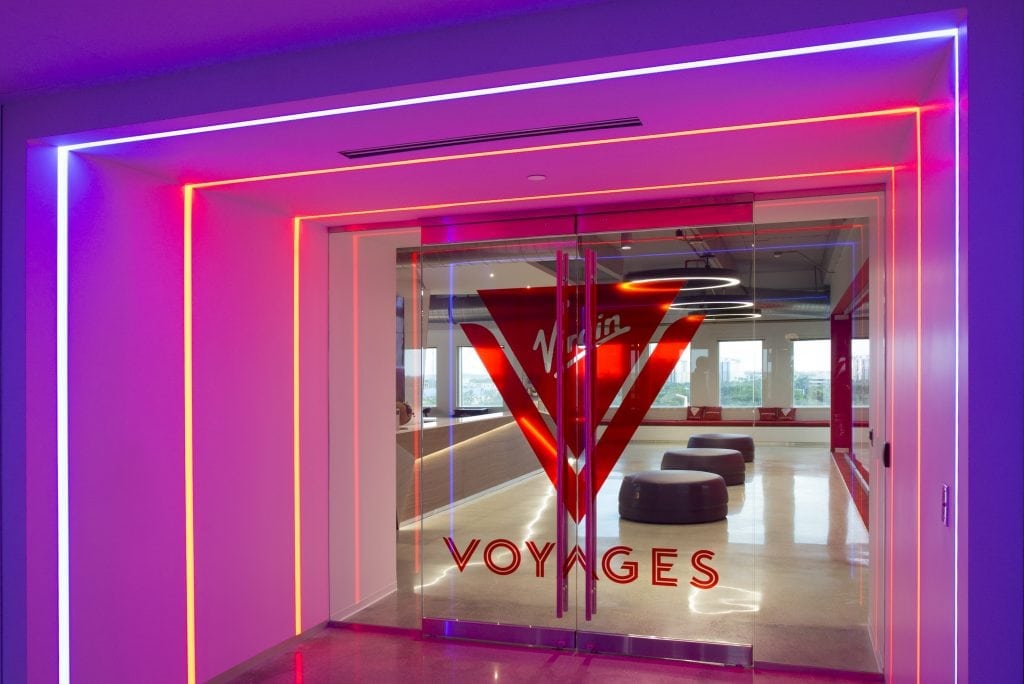 Virgin Voyages is emphatic about being a different kind of cruise player while planning to sail from the world's busiest cruise port to the most popular destination. The difference will be in the details, and we're still waiting for most of those.

Nearly three years ago, Tom McAlpin revealed some of the first details about the industry newcomer Virgin Cruises.

At the time, he said the brand was soliciting input from the traveling public: “How can we design your ideal ship, your most irresistible vacation ever?” asked McAlpin, who joined Virgin from the private residential ship The World.

Now, with more than 10,000 answers to that question, the joint venture between Virgin Group and Bain Capital is hard at work on its first ship in preparation for a 2020 debut. The ship will sail the Caribbean from Miami.

Renamed Virgin Voyages in 2016, the line just moved into new headquarters in a suburb of Fort Lauderdale, Florida, with plans to grow from its team of about 85 to 300 by the end of 2021. That’s the year its second ship is scheduled for delivery, with a third following in 2022.

McAlpin, the CEO, said potential guests — called “sailors” in the company’s lingo — gave a list of what they wanted from the line: “authentic, great meals; great experiences; great entertainment; and to go to fun places.”

And they want it all delivered in Virgin style, maybe in unexpected ways.

“There’s a great weight of expectations we feel given the feedback we’re getting and the history of the brand,” said Chief Commercial Officer Nirmal Saverimuttu.

Skift sat down with executives from the cruise line — many of them veterans of Virgin Group businesses — to discuss their approach to getting the cruise line off the ground,  creating a product that will stand out, and why a no-kid approach is right for the brand. McAlpin also spoke about the line Tuesday at the Seatrade Cruise Global conference in Fort Lauderdale.

Designing the Experience (and the Ship)

Virgin Voyages has big goals: create “an epic sea change for all” that will carve out a new type of travel experience. In a word, they want to be different.

“We don’t have to play the game of the biggest, the fastest or the longest,” said Chief Marketing Officer Nathan Rosenberg. “There’s a particular style, tonality, much more sophisticated presentation. The fact that we don’t have slides on the ship sends a message about the kind of experience we have.”

The company hired 10 design firms that have never worked with cruise lines as well as a naval architect to coordinate all the ideas and help them make sense on a ship. The line also brought in staff with experience in boutique hotels.

Designers spent more than two years working on cabins, though details are still under wraps. Ninety-three percent of rooms will have an ocean view, while 86 percent will have balconies.

Renderings of the ship show silver accents and smoked glass, with a mermaid design on the side. Executives said they draw inspiration from other Virgin brands including Virgin Galactic and Virgin Hotels.

“When you see that ship in any port around the world, you’re going to say, ‘That’s a Virgin ship,'” McAlpin said. 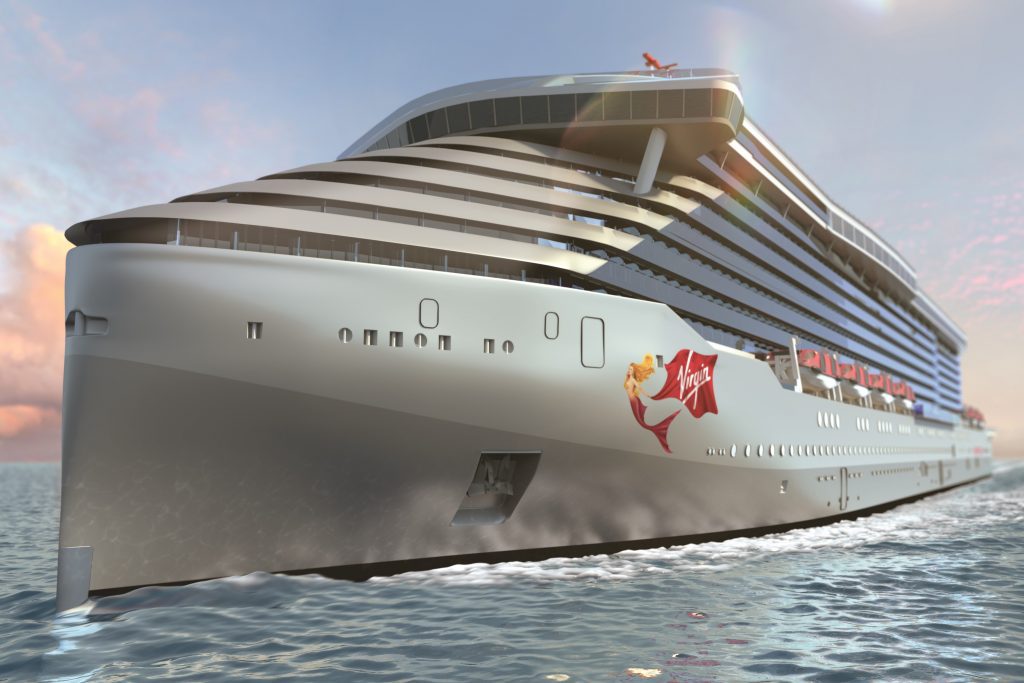 A rendering of the first Virgin Voyages ship.

Saverimuttu said the larger Virgin brand has helped the line create its identity.

“The brand acts as a huge filter for us,” he said. “It gets you to the door. Our job is to satisfy you and keep you happy.”

The entertainment and food and beverage experience, McAlpin said, will also be different — but those details have also not been released.

Cooper said the focus for the “sailors’ experience” was to offer them choices both high-end and low-key.

“Sometimes you want to feel glamorous,” she said. “And other times you just want to hang out and been your board shorts and T-shirt.”

With that in mind, the company is taking a strategic, scientific approach to what the programming of the ship should be, Saverimuttu said.

“We’re thinking through how people want to move through emotional states in the voyage,” he said. “When you start your vacation, there’s a lot of anticipation. We want to take you through a journey that leaves you rejuvenated at the end.”

The line expects to snag people who already cruise but want something different. Executives also see an opportunity for the new-to-cruise crowd, even those who are skeptical of cruising.

“We’re creating a unique concept, brand, experience, similar to what Disney did,” said McAlpin, who spent 14 years with Disney Cruise Line, including five as its president. “We will get new cruisers because they’re willing to trust the Virgin brand.”

Virgin isn’t making a millennial play, instead looking for travelers who are “young at heart.”

“This sort of narrow focus on millennials doesn’t make sense for this brand,” Saverimuttu said.

The family market — a big focus for mainstream cruise lines such as Carnival, Royal Caribbean, and Norwegian — is off the table entirely for now. The company announced its “Adult By Design” plan to keep the first ship to passengers 18 and older in November.

McAlpin said the line originally planned to have an adult-centric experience but allow children on board. After doing more research, they learned that even parents wanted kids to stay off the ship.

“Is there a segment of the population that won’t go on us? Yes, but that’s OK,” McAlpin said. “Not everyone’s going to love you. The people who love you really love you.”

Though press materials sometimes refer to “adult-only vessels,” the policy only applies to the first ship so far. McAlpin said that another market could work better for families with kids, and he wants to keep the options open.

“I think any new business that starts up needs to maintain the flexibility,” he said.

The company hasn’t said what the price point will be, but McAlpin called it a “premium plus product.”

“We are not going to be a mass market [cruise line] competing on price,” he said. “I think that’s a very slippery slope. We’re about a premium experience.”

McAlpin said that’s also why the brand is going with medium-sized ships of 2,750 passengers instead of the megaships that mainstream cruise lines are sailing. He said the original idea was to build two ships that could hold 4,500 passengers each, but the company announced the plan for three scaled-down ships in June of 2015.

That came after onetime Norwegian Cruise Line CEO Colin Veitch sued Virgin for stealing his idea for two 4,200-pasenger “ultra ships,” but the company has said the change was unrelated to the litigation. The two sides settled under confidential terms in January 2016.

McAlpin said the change came about because of feedback over the size.

“As we did research, what our guests told us was they were concerned with scale,” he said. “Our ship, we think, is the right size. It allows us to go to some unique places, it allows us to have a more intimate experience.”

Getting off the Ground

There’s a reason brand new cruise lines are rare, and usually come with some link to an existing cruise operator or larger travel company.

Virgin Group has been there and done that, Saverimuttu said. A veteran of the group, he approached McAlpin about the job.

“He recruited me and then I hired him,” McAlpin said. “I said, ‘I will come do this if you come do it with me.'”

The staff — even on land, they go by “crew” — is made up of a similar mix of cruise industry experts and Virgin insiders.

“It’s marrying people with their knowledge with Virgin thinkers, with our understanding of who our consumer is and how we create great experiences for those people,” Cooper said. “It’s that magic that creates a difference in the marketplace.”

As the ship is being built in Italy, the rest of the business is coming together: finance, forecasting, marketing, sales, reservations, property management, and more. Weekly meetings focus on all the spaces and projects that face customers.

“Minus two years is not very far away,” Cooper said. “The first phase it was all about the ship. Then we moved into sort of almost setting up the business. … Now we’re almost moving into the operation and making sure we’ve got the infrastructure to run the ship and have all these people deliver amazing service.”

Virgin Voyages plans to keep rolling out news about the product as the launch date approaches. While reservations aren’t open yet, the company announced late last year it was accepting $500 deposits to get on a pre-sale list. On Jan. 31, they announced via email the pre-sale would be closing on Feb. 14, earlier than expected.

In a follow-up email, the company told Skift that executives made the decision to close the deposit program “so that we can keep the pre-sale access truly special.”

McAlpin said demand for new capacity across the industry is so high that cruise operators need to make decisions far in advance so they can get their order fulfilled by the handful of shipyards that can make modern cruise ships.

“If you want to think about building ships in 2024, you’ve got to be making decisions pretty quick,” he said. Virgin is in the middle of figuring out that growth strategy, but McAlpin said he’s optimistic about the potential.

“I think that this is a business, this is not a three-ship fleet,” he said.

Still, the company is content to stay a boutique player rather than a giant in the industry.

Photo credit: The new headquarters of Virgin Voyages in Plantation, Florida. The cruise line's first ship is due in 2020. Robin Hill / Interior Architects