5 Lessons From Iceland and the Perils of Overtourism 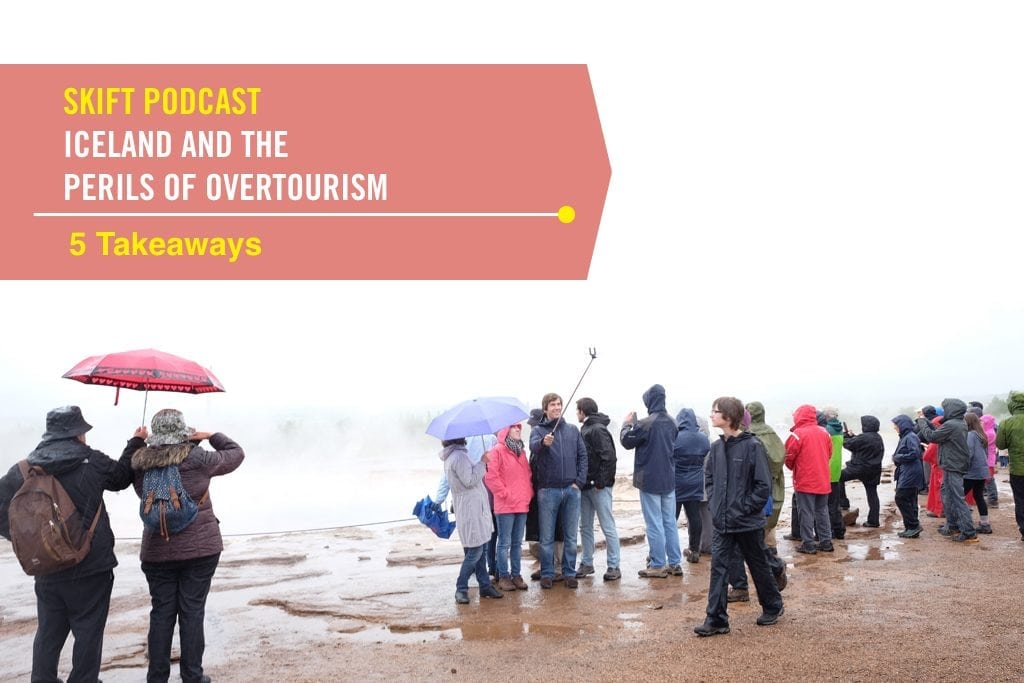 Tourism can be a great economic driver, but massive growth isn't always sustainable. Iceland now grapples what we call overtourism and has some serious planning to do for the future.

We looked at Iceland for a recent episode of the Skift Podcast, in which we explored how Iceland became a hot tourist spot, the tiny country’s complicated relationship with its visitors, and how the problems of overtourism can be solved. Read our 12,000-word deep dive here.

Our guest was Skift reporter Andrew Sheivachman joined by Skift podcast host Hannah Sampson. The episode includes audio recordings from Andrew’s interviews during his trip to Iceland, from which he wrote the deep dive.

The recession hit Iceland hard, causing its three largest banks to go under, which in turn made it a bargain destination. At the same time, Icelanders had less disposable income to travel and the airlines began to focus on international routes, bringing more foreign visitors in.

“Tourism is the factor that got us out of the recession and placed us where we are now,” said Ólöf Ýrr Atladóttir, director general of the Icelandic Tourist Board. “We couldn’t foresee this tremendous growth in interest for Iceland. That is also coupled with the fact that, in the last five years, the world has gone out of a recession. People are traveling more and more.”

The tourism boom has remade the capital city of Reykjavik.

Before the boom, downtown Reykjavik bore little resemblance to the more modern city that exists now. Increased tourism kicked up the demand for Airbnb, carsharing, and other elements that tend to attract yet more visitors. Now, the demand is outpacing the supply.

Icelanders are wondering who benefits from increased tourism.

Some Icelanders worry that only the top executives benefit from tourism, while the locals bear the difficulties.

“We are just realizing what tourism is. It’s a totally different industry from all others,” said Atladóttir, comparing tourism to fishing, the country’s former top industry. “You can go out and fish, and you go and get your fish, and then come back. There’s somebody in the factory that prepares it, and then it’s sold. That, of course, is a tremendous economic impact, but then everybody goes home. The fish aren’t bothering you out in the streets asking where the restaurants are, and aren’t using your buses or utilizing a lot of the public goods. They aren’t sitting in your swimming pools.”

Iceland needs to reevaluate its infrastructure and related governmental policies.

Officials are wondering how much more traffic Iceland’s aviation and hospitality sectors can handle with its current infrastructure. To generate money for infrastructure improvements, the government has considered airport entry fees, road tolls, and other types of taxes.

“I don’t know anyone, any tourist who would come here to talk to, who’s not willing to do so. To give some money,” said Fridrik Palsson, owner of the boutique Hotel Ranga in Hella.

“I am not an advocate for unlimited visitors,” said Skúli Mogensen, CEO of Wow Air. “I fully agree that visitors are an issue for our nature and preservation. I have no problem with having some sort of a cap. Can we, if we want, go to five million? Yes.”

Iceland won’t be a bargain forever.

Iceland has been a budget destination for the last five years or so, but as demand grows, prices are bound to rise accordingly.

“Iceland should not be cheap, it should be rather expensive,” said Grímur Sæmundsson, CEO of Iceland’s Blue Lagoon spa. “You are able to come to Iceland on a low budget, but the image of the country is not that it’s low-budget. It is rather expensive. These are issues that we need to from a strategic viewpoint, kind of develop together with the authorities. What kind of destination do we want Iceland to be in 10–15 years?”

Photo Credit: Tourists visit the Great Geysir area, a popular natural attraction in Iceland. The country saw the number of visitors increase more than 250 percent between 2010 and 2015. Andrew Sheivachman / Skift