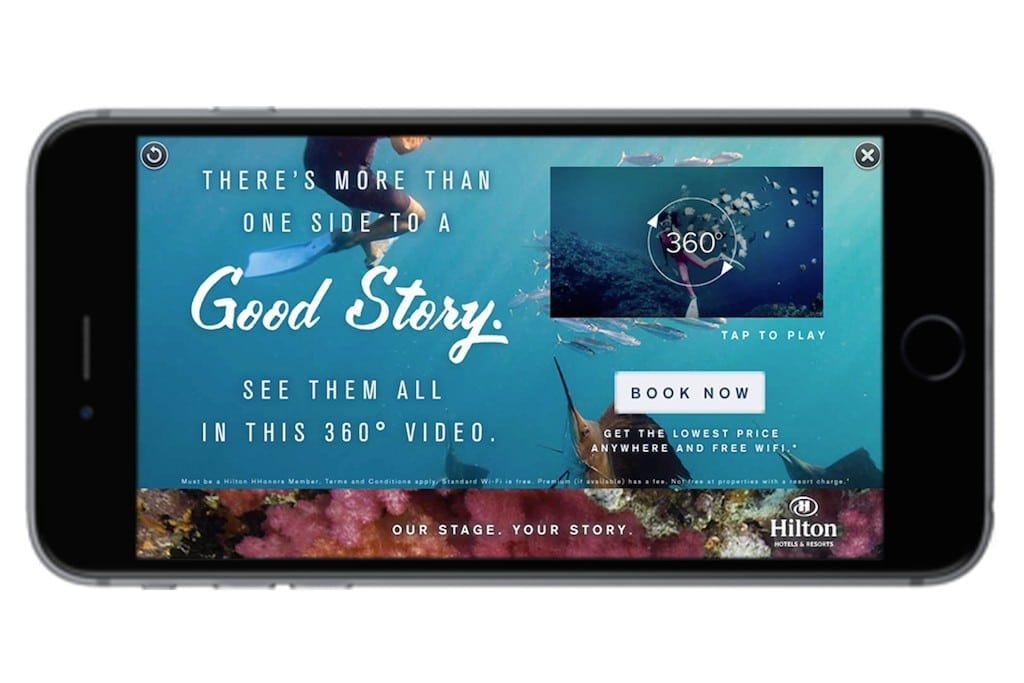 Many travel and tourism brands are harnessing the power of 360-degree video to inspire travelers, but this is the first time we've seen it used to convert direct bookings. It'll be interesting to see the results of this campaign by the end of this year.

Hilton Hotels & Resorts is joining a handful of travel brands that are using 360-degree travel videos to immerse consumers in a virtual-reality-lite experience that the company hopes will also translate into direct bookings.

Here’s how it works: First, the mobile ad begins with a 16-second Hilton video, asking consumers, “Where will your story take you?” Once the high-definition video ad ends, a custom “end card” shows up with a link to an interactive 360-degree video, “Destination: Inspiration” that takes viewers on a “virtual vacation” to the Hilton Barbados Resort.

When a viewer rotates his or her mobile device, the video view changes to provide a full 360-degree perspective. Once a user is done viewing the 360-degree video, which contains about four minutes’ worth of content, an end card appears with a “Book Now” button. Clicking on the button prompts users to enter their preferred destination, which then pulls up hotels in that area via Hilton.com’s reservation system.

In line with Hilton’s largest campaign to date, “Stop Clicking Around,” Hilton HHonors members who book via the mobile ad also enjoy exclusive discounted rates that include free Wi-Fi, digital check-in, and points.

Hilton believes this new mobile video ad campaign has the ability to translate into direct bookings by introducing consumers to a 360-degree view of one of its most popular Caribbean properties, but it’s still too early to tell if the video content is correlating directly to a bump in reservations. Also, unlike other forms of 360-degree videos that can be viewed on your desktop, this video is only accessible on mobile devices.

Mary Beth Parks, senior vice president of global brand marketing for Hilton Worldwide, said, “There’s no doubt that other travel brands are also creating amazing virtual reality content for their audiences, but few brands are looking at it as an actual sales tool. Our 360-degree video includes an end card that is directly integrated with Hilton.com’s booking system, so that if viewers are inspired to book their next trip, they can do so in that moment.”

To launch the ad campaign, which is a part of Hilton’s three-year-old “Our Stage. Your Story.” brand initiative, Hilton worked with Opera Mediaworks and Hilton’s advertising agency, OMD. Opera has one of the largest mobile advertising platforms globally, with a reach of more than 1.2 billion customers through nearly 20,000 different mobile apps and websites.

The Hilton ad is being rolled out in a targeted way across Opera’s platform, and Hilton worked with Opera to identify a target audience of affluent leisure travelers between the ages of 25 to 54 for this campaign specifically. The ads first debuted on March 21 and will run through the end of 2016.

“These experiences are resonating,” said Mike Owen, executive vice president of North America sales for Opera Mediaworks. “Consumers are spending more time with these ads and we have to see, as we get further down the road, the additional impact that these ad units have versus the classic banner advertisement.”

Use of 360-degree videos is becoming an increasingly popular marketing tool, especially for travel and tourism brands, because of their uniquely visual characteristics. Facebook recently launched 360-degree videos on its platform with such brands as National Geographic and Tourism Australia offering a variety of videos on their respective Facebook pages.

Facebook has been making serious investments in 360-degree video and virtual reality applications since 2014 when the company acquired Oculus for $2 billion. Tourism Australia told Skift earlier this month that its on-site engagement has increased heavily thanks to these videos, with consumers spending an average of eight minutes and 30 seconds on Australia.com, a record time for the site that is resulting in a 64-percent increase in on-site engagement. But it still isn’t sure how many viewers who see the videos on Facebook are compelled to go to Australia.com.

The Hilton Waikoloa Village also has a 360 Pacific Ocean Cabana View video on its Facebook page. Parks said, “This [360-degree video] is a medium the brand and our hotels continue to explore.” It’s important to note that the Hilton Barbados and Hilton Waikoloa videos are 360-degree videos and not the same as videos produced for virtual-reality technologies like Oculus Rift or Google Cardboard.

Parks said, “We are excited about how consumers have responded to the video campaign thus far and are exploring options for follow up videos that will immerse audiences in our portfolio of more than 570 hotels based on learnings from this first campaign.”