Boasting about its on time stats, Delta Air Lines made news earlier this year by promising its corporate clients that it could meet or exceed the performance of American or United. It was a promise rife with stipulations and as much marketing as real practice, but in the end it threw down the gauntlet.

Months later, United has now responded by creating its own on time guarantee. Instead of refunds if the carrier falls behind the others though, United is offering to give credit for upgrades and other ancillary fees.

Past the weak sauce regarding refunds, there are a variety of other hoops that your company will need to jump through to qualify for the program. United’s got a new landing page for the campaign here. 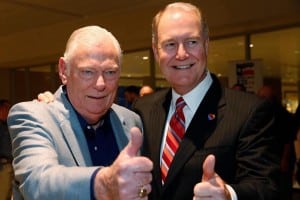 Hoverboards Banned on Delta and American Air Over Fire Concerns: The three largest U.S. airlines are banning hoverboards because of the potential fire danger from the lithium-ion batteries that power the devices. Read more at Skift

Southwest CEO on How a Maturing Airline Can Keep Its Competitive Mojo: When it comes to competing against the likes of Spirit and Frontier, is 48-year-old Southwest Airlines like the middle-aged guy who can longer fit into his college jeans? Read more at Skift

United Tries to Make Peace With Economy Class Using New, Delicious Snacks: For the first time in a decade, United Airlines will offer free snacks to budget travelers on short routes in the Americas — a partial reversal of efforts to cut service for passengers buying the cheapest tickets. Read more at Skift

British Prime Minister Puts Off Heathrow Runway Decision Until Summer: David Cameron delayed once again the decision he has been putting off for more than three years: whether to allow another runway at Heathrow Airport, and in so doing break a promise he made in 2010. Read more at Skift

UK Airlines Say Heathrow Delay Is All About Prime Minister’s Ego: U.K. airlines condemned David Cameron’s move to put off a decision on a third runway for London’s Heathrow airport until next summer, with British Airways parent IAG SA saying the delay was ego-driven after the prime minister’s pledge five years ago to block the hub’s expansion. Read more at Skift

JetBlue’s Amazon Theater and the Benefits of Having Your Own Terminal: When travelers arrive at JetBlue’s terminal at New York’s JFK Airport, the carrier greets them with promises of free Wi-Fi, surrounds them with New York State scenery, offers them a chance to roam its roof deck, and perhaps even gives them a concert including mega-celebrities like Taylor Swift. Read more at Skift Uber’s New Contract for Drivers Seeks to Restrict Their Right to Sue the Company: Uber Technologies Inc. is asking its drivers nationwide to sign a re-worded contract that restricts their right to sue in an escalation of a battle over whether they should be treated as employees. Read more at Skift

Study: It’s Only a Matter of Time Until a Drone Hits a U.S. Airliner: A new report on drone sightings and close encounters with aircraft finds that the proliferation of drones is quickly creating an unsafe environment in the air above U.S. airports. Read more at Skift

Airlines urged to prepare for VR revolution with great content:Ever since Qantas rolled out the Virtual Reality (VR) red carpet to their premium passengers earlier this year by offering Samsung Gear VR headsets to travelers in select lounges and first class A380 cabins, speculation about the future of VR and Augmented Reality (AR) as a viable alternative to traditional IFE has run rampant. Read more at Runway Girl Network

Happy Passengers May Make a Difference to Airline Performance After All: During yesterday’s International Air Transport Association (IATA) Media Day in Geneva, IATA Director of Marketing and Sales Tim-Jasper Schaaf presented new data points which cast a new light on the importance of happy passengers. Read more at Skift The Lifestyle Hotel Collection That’s Courting the Meetings Industry: The lifestyle hospitality sector has exploded in the last two years with the rise of new corporate, independent and “soft” brands promising a better guest connection to the local destination. Read more at Skift

How to Bring Your Favorite Hotel Bed Home: Virgin Hotels now sells its cozy new beds online—but it’s not the only way to bring that luxurious, deep-sleep experience from a hotel home. Read more at Conde Nast Traveler

Hotel Acquisitions Add Up to $46 Billion in 2015: Accor SA may be paying too much to acquire the owner of the luxury Fairmont, Raffles and Swissotel brands as the French company scrambles to protect itself against online competitors and expand its U.S. and Asian reach. Read more at Skift

Ever been on an aircraft during an aborted takeoff? Read Zach Honig’s account on the new Qatar A350 here.