Every three months or so there’s a new report from a new OTA or pundit claiming to know when the best time to buy airplane tickets is (latest strategy: Tuesdays, wearing your favorite jeans, standing on one foot and singing the Canadian national anthem).

Yeah. I’m sorry to say there’s no solution. Each airline has its own algorithm for pricing out tickets, and the formula changes when inventory shifts (i.e., when somebody buys a ticket). It changes again based on the distance to departure. So if you can afford the ticket and you don’t want to check the price every day, lock it in and move on with your life. If it’s within two weeks of departure, buy it now. Otherwise, the prices are all dust in the wind.

If you ever had any doubt about the long term forecast of inflight Wi-Fi, your questions are now answered. AT&T and Honeywell just announced that they’re getting into the inflight internet game, in direct competition with Gogo and Panasonic. They’re taking advantage of their domestic LTE network to pump 4G service from the ground up to the aircraft, though according to Honeywell there will eventually be satellite capability as well. Gogo’s stock, as you can imagine, responded accordingly.

AT&T’s product wont be ready until 2015, and many carriers are currently locked into ten year contracts with Gogo — so who knows what market AT&T is expecting to capture. But competition is good, and hopefully next year’s consumer pays less for inflight internet.

Musing over who exactly AT&T’s customers for LTE ATG are. Any US airline not yet picked a Wi-Fi horse?

Forget Studies About Best Time to Book Air Travel. No One Has Any Idea: Airlines use sophisticated computer programs to analyze booking trends and constantly change prices to get the most money out of each flight.  Complicating matters is a bevy of fees added to help the airlines offset higher jet fuel prices. Read more at Skift

Southwest CEO Promises to Improve Its Lagging On-Time Performance: Southwest Airlines is falling behind other airlines when it comes to arriving on time, and the carrier plans to tinker with its flight schedule to fix that. Read more at Skift

U.S. Airlines Flying Smaller Planes, Cutting More Flights to Mid-Size Airports: A government watchdog confirmed Wednesday what airline passengers are finding when they try to book a flight: Service to communities of all sizes is declining, but especially to small and medium-size airports. Read more at Skift

Qatar’s New Multibillion-Dollar Airport Signals Its Tourism Ambitions: A vast new airport in the Qatari capital opened for business following years of delays Wednesday as the natural-gas rich Gulf nation works to transform itself into a major aviation hub and prepares to host one of sporting’s biggest events. Read more at Skift

Uber Is Looking at Improving Car Traffic Flow at Airports: It turns out that Uber is interested in airports…it is looking at ways that transportation in and around airports might be changed in such a way that — in theory — airports could carry more passengers, more efficiently. Read more at Skift

The Best and Worst European Cities for Hotel Wi-Fi: Britain’s hotels are among the worst in Europe when it comes to providing free Wi-Fi for guests, new research has shown. Read more at Skift

Concur Is Losing Money Along the Way to Reworking Corporate Travel: Concur Technologies notched strong revenue growth (31%) in its fiscal second quarter, doubled the number of customers signed up for its open booking TripLink platform to 1,000, and continued to pile up losses — namely $56 million. Read more at Skift

SkyMall Loses its Captive Audience: Analysts warn that SkyMall must modernize or join the Montgomery Ward and Sears catalogs on the scrap heap of retail history.  Read more at the LA Times 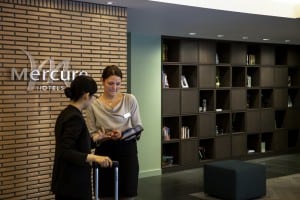 Accor Drops the Hotel Check-in Desk for a Mobile App: Accor, the hotel chain with brands ranging from Sofitel to Novotel and Ibis, revamped the check-in process based on a radical idea: It wants its staff to provide personalised service instead of being bogged down filling out paperwork to register guests. Read more at Skift

Red Roof Inn Redecorates to Appeal to Millennials: Red Roof Inn has shelled out $150 million to renovate its properties. What drove that decision? The reviews on TripAdvisor. Read more at Skift

Wearables Replace Room Keys and Credit Cards at Two Ibiza Hotels: Two Ibiza hotels are rolling out wearable technology that will allow guests to leave their room keys and credit cards in their luggage while enjoying the summer destination. Read more at Skift

In pointing to a link of a profile that KOMO TV produced, Gary Leff inadvertently selects a spectacular new social media profile photo. I call it: “Jetlagged traveler rides an escalator and forgets where home is.” Gary. It’s time for a twitter profile picture change. We have a winner.