Good morning from Skift. It’s Tuesday, January 11, in New York City. Here’s what you need to know about the business of travel today. 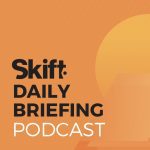 Listen to the day’s top travel stories in under four minutes every weekday.

Today’s edition of Skift’s daily podcast discusses how Omicron has hit hotels in Europe harder than elsewhere, the somewhat sneaky return of business travel, and the continued delays of long-haul tours around the world.

Here’s what you need to know about the business of travel today.

The emergence of the Omicron variant has complicated tour operators’ efforts to relaunch tours that were enormously lucrative for them prior to the pandemic. So many of those companies have been forced to delay running long-haul trips due to the travel curbs enacted in Omicron’s wake, reports Editorial Assistant Rashaad Jorden.

The inability of many tour operators to conduct long-haul trips — which run longer than two weeks — is another blow to many companies still yet to totally recover from travel curbs enacted early during the pandemic. An executive at one Australian-based tour operator told Skift that roughly 30 percent of guests on its long-haul trips pre-Covid came to the country from the United States, from which tourists are still unable to enter Australia. Another executive said his company has had to remove some trips from its 2022 itinerary due to certain countries not yet reopening for tourism.

Next, we delve into the return of business travel. Several corporate travel managers have already sent staff out on business trips in the new year, but it’s not something many of them are publicizing, writes Corporate Travel Editor Matthew Parsons.

As Omicron still continues to cause chaos regarding travel restrictions, some companies have been hesitant to broadcast the fact they’re sending employees out on the road again for fear of possibly having to backtrack. A UK-based executive for a global analytics company told Skift that despite allowing domestic travel in China, it has concerns about the emergence of a new variant possibly forcing it to retract any public statements it makes.
Despite seeing an increase in business travel bookings for February and March, Clive Wratten — the chief executive of the U.K.’s Business Travel Association — said numerous companies are still cautious about sending staff on the road again as they feel restrictions won’t change abruptly.

We end today in Europe. Omicron has hit hotels on the continent enormously hard in the start of the new year, which could happen elsewhere, writes Hospitality Reporter Cameron Sperance.

Hotel performance across Europe has fallen 40 percent from two years ago, according to the most recent information compiled by industry data company STR. Meanwhile, Chinese hotels only experienced a three percent decline while U.S. hotels — boosted by the holiday season — saw a 27 percent rise.

Europe’s struggles are attributed to several nations on the continent, including the Netherlands, going into lockdowns after the emergence of Omicron. But Sperance writes that Omicron outbreaks could also threaten the recovery of China’s hotel industry as following previous Covid surges, Beijing has typically implemented lockdowns that have caused the country’s hotel performance to plummet.