For tourists, interest in 9/11 has never waned, but the pandemic has been hard on tours and exhibits. The enormous media coverage of the 20th anniversary of September 11 will hopefully draw new crowds for this special day.

The 20th anniversary of the September 11 attacks that struck the United States represents a significant occasion for people to pay tribute to those who lost their lives that day.

But even before the Saturday anniversary, large numbers of travelers have been taking the time through tours to learn about the people as well as the places affected by the events of that fateful day. Tours commemorating September 11 even outside New York City serve as major attractions for those from afar as well as big business.

“In general, about 40 percent of our visitors have been international,” said Jennifer Webb, the CEO of the 9/11 Tribute Museum, which has welcomed more than five million visitors since opening in 2006.

The museum conducts tours taking guests to sites associated with the day, such as the Fire Department of New York Firefighters Memorial Wall and the 9/11 Memorial. Those tours have attracted on average roughly 300,000 guests annually, and Webb added that the museum typically sees a boost in visitor numbers around the anniversary although this year’s figure will be smaller than in pre-Covid years. September 11 is undoubtedly a powerful day for those involved in tours connected to the day.  “It’s an event that stopped the world,” said Andrew Luan, the CEO of ExperienceFirst, the parent brand of several New York City walking tour companies, including 9/11 Ground Zero Tours. Its most popular offering connected to September 11 features featuring a 90-minute guided tour of Ground Zero and admission to the One World Observatory at Freedom Tower.

“We all remember where we were and what we were doing as the events unfolded that day.”

September 11 is particularly emotional for Luan as his sister had to evacuate her school a few blocks away from Ground Zero that morning. It’s also enormously emotional for the guides on the 9/11 Ground Zero Tours, several of whom have provided firsthand accounts of that day on the company’s website. They are all New Yorkers with a personal connection to the day’s events.

“Personal stories are the most powerful,” Luan said about the connection guides have to September 11. “[They are] authentic and detailed.”

While it’s not surprising that painful could be used to sum up emotions connected to September 11, Thomas Baxter IV describes the 20th anniversary as a solemn event as well as a word many people wouldn’t expect: joyful.

“It brings people together from different walks of life that would not normally have met one another,” said the president of the 9/11 National Memorial Trail, which connects the memorial sites at World Trade Center, the Pentagon and Stonycreek Township, Pennsylvania commemorating Flight 93. “So it’s an opportunity to remember and also an opportunity to grow.” What does Baxter mean by joy? “Laughter and camaraderie. It’s sort of like a family reunion,” he said of the groups that gather on the 1,300-mile trail. “A family that came together through tragedy. But they love one another.”

The 9/11 Trail — which is slated to receive a national designation from the federal government — has given a substantial boost to many small towns along the route, bringing an enormous number of visitors to locales that, Baxter said, would not normally attract visitors. Residents of such locations have enthusiastically welcomed the arrival of large numbers of cyclists, taking steps such as setting up bike racks and opening up accommodation to welcome the visitors.

While Baxter was unable to provide a figure for how many walkers and cyclists the trail has attracted — an economic impact study might not be completed until next year — he said the 9/11 Trail has been enormously popular with tour groups despite its staff not actually producing tours of the trail. Numerous cycling groups have used the interactive map appearing on the trail’s web page to cycle it in its entirety or do smaller portions of it.

Like many groups and organizations, the 9/11 Trail had to resort to conducting virtual rides due to the pandemic, using technology that enables people to track their progress on the trail. Those rides actually helped give a wider audience glimpses of the country they may not have seen as the staff instructed riders to take pictures for its September 11 photo archive.

The photo archive has been a major success, Baxter said. So much so that the 9/11 Trail staff had to expand the bandwidth on its website to accommodate all the photos. And when asked if there were people on the virtual tours explaining the significance of certain locations, Baxter responded that was the case. “On the virtual trail map, there are points of interest all along the way, so people get an understanding of place and importance,” he said.

While Baxter believes the 9/11 Trail has certainly educated so many people about that fateful day, he sees the trail as having a more significant impact. “It brings us together as a nation,” he said. 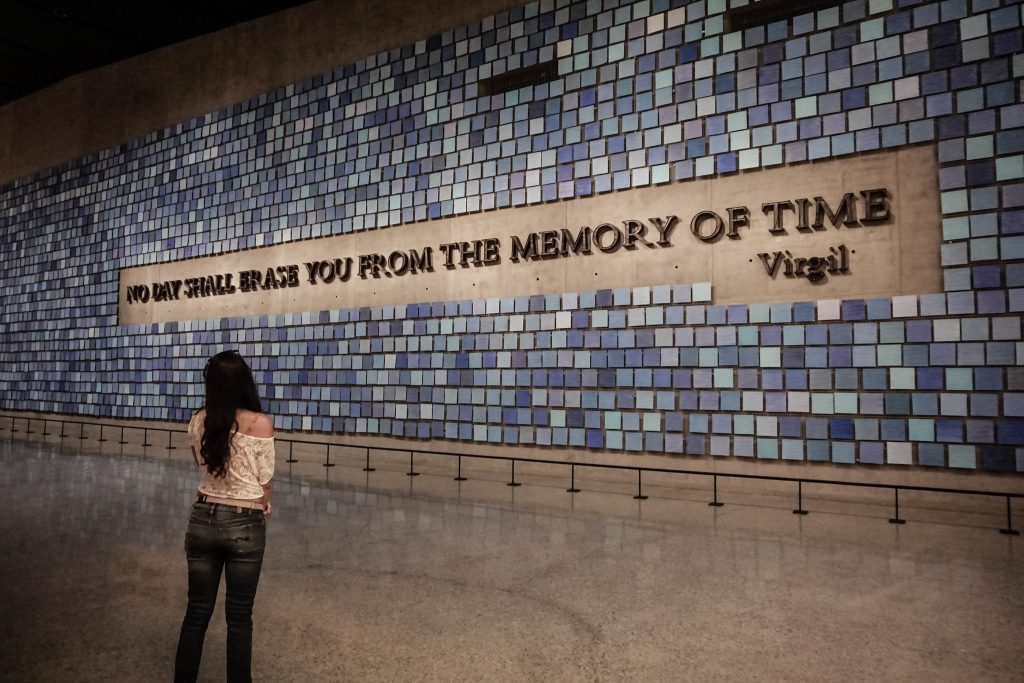 Photo Credit: A guide at the September 11 Memorial points to the names of those who died that day. 9/11 Tribute Museum