While many travel companies are struggling to survive, Google has the resources to keep innovating and rolling out new products despite the travel advertising downturn. As with flights and hotels, Google's new tours and activities advertising business will have a far-reaching impact — unless regulators step in.

Without fanfare, Google is making yet another push into travel by introducing what tours and activities vendors have feared for years — its own prioritized advertising business with leading attractions competitors dragged along for the ride.

Although it is only likely visible to a small percentage of users for now, Google is launching a new commercial advertising unit featuring attractions from the likes of Viator, GetYourGuide, and Tiqets, for example. The advertising box in the test we’ve seen appears atop the Google search results page or screen — higher than other paid ads and free search engine results — and features five tours and and one supplier listed in initial search results for each.

Below is a screenshot of Google’s new “things to do” advertising unit showing various Berlin, Germany tours from GetYourGuide and Viator. We haven’t seen the whole navigation, but travelers eventually end up on Viator or GetYourGuide to book the tour tickets. 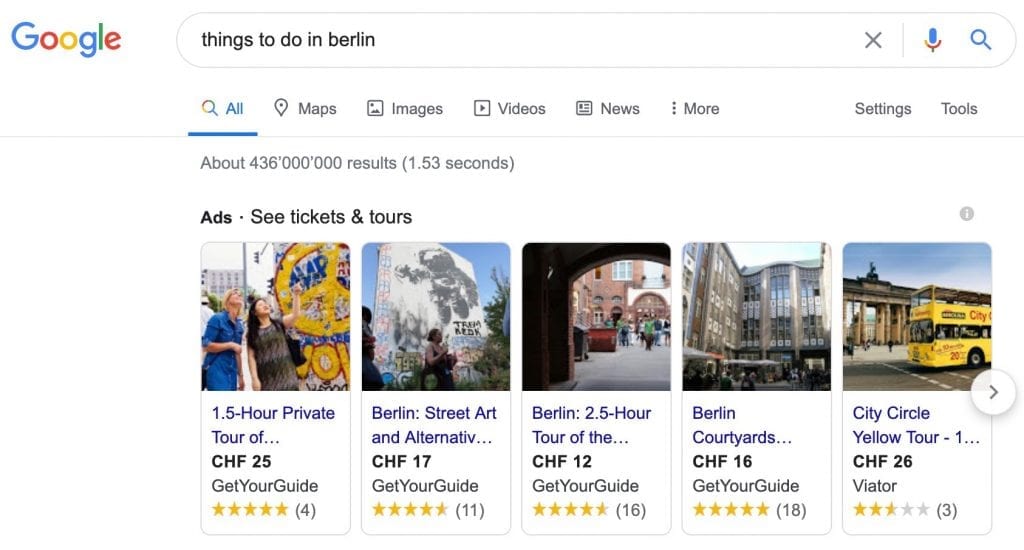 It is Skift’s understanding that the vendors, in order to participate, need to agree to long-term licenses allowing Google to use their tours content for Google’s own business. Otherwise these attractions’ vendors can’t participate — and sacrifice all that traffic to their websites.

So the choice becomes get in on the traffic that the dominant search engine will send to your site as it places its own advertising unit atop its search results page, and allow Google to use your content — or be left behind.

It’s the feeling among some tours and activities providers that they are essentially becoming the fulfillment wing of Google’s new tours and activities business. Users are directed from Google to the booking pages of Viator or GetYourGuide, for instance, which is great for the user experience, and enhances turning lookers into bookers. However, if customers don’t find what they are looking for, then arguably they might return to Google for more options rather than browse the suppliers’ sites because of the way the navigation is set up. In tours and activities now, Google’s new commercial unit preferences its own advertising platform ahead of competitors’ free links. This is just a test and could change, but in the examples shown above, Google even preferences this new advertising unit ahead of other paid advertising links.

In hotels, Google’s one-box, replete with star ratings, rates, hotel photos, and a map, is given preferential treatment, below paid ads and above organic links from travel companies. The first click from the Google one-box is unpaid, but it leads consumers into Google’s universe of free and paid links.

Asked to comment on the new “things to do” advertising unit, a Google spokesperson said: “We’re constantly exploring new ways to improve our experience for our advertisers and users, but we don’t have anything specific to announce at this time.”

More Than a Decade in the Making

Tours and activities advocates have been waiting for the sector to come into its own for more than a decade — and in many ways it already has.

Tripadvisor bought Viator in 2014, Softbank has invested in GetYourGuide and Klook, both of which have raised tons of funding, Airbnb debuted “experiences,” and there’s even a conference business from Arival dedicated to the sector.

But Google planting its foot down hard atop “things to do” search results may have more far-reaching impact than the other developments.

Tours and activities booking sites — and major online travel agencies — have raised antitrust concerns in Europe and the United States about Google’s business practices in travel.

The vacation rental price-comparison firm, HomeToGo, based in Berlin, disclosed last week that it lodged a formal antitrust complaint about Google’s business practices with the European Commission in March 2019.

“Google decided to take a big share of the whole market for free,” a HomeToGo spokesperson said. “Google achieves this by implementing a huge and eye-catching advertising space on the general search after the paid results, rerouting traffic at no costs and that otherwise would go to competitors right into their own product, cutting off other providers from being seen at all.”

Asked about German travel company complaints about Google’s competitive practices, a Google spokesperson said: “There are now more ways than ever to find information online, and for travel searches, people can easily choose from an array of specialized sites, like TripAdvisor, Kayak, Expedia and many more. With Google Search, we aim to provide the most helpful and relevant results possible to create the best experience for users around the world and deliver valuable traffic to travel companies.”

Like Google’s boxed vacation-rental search results that appears above other links on Google’s pages, tours and activities providers will undoubtably be concerned about Google’s new preferential advertising unit for the sector. (Google hasn’t yet monetized its boxed vacation rental results.)

In addition to the new advertising unit, Google earlier his summer separately rebranded the Explore section on its Google travel pages, and now calls it Things to do. Google feels the latter name more accurately reflects the tours, activities, attractions and other points of interest that it details.

It might be a little confusing, but while Google is collecting paid clicks from advertisers in the new tours and activities commercial unit in search, the “Things to do tab” on its dedicated travel pages is so far just informational, and doesn’t have any booking capabilities.

For now, that is.

Photo credit: Picture is a screen grab of a 2-minute video tribute to the Eiffel Tower. Google just made a big move in tours and activities. Egg Films