Peloton Vs. SoulCycle: The Battle Heats Up 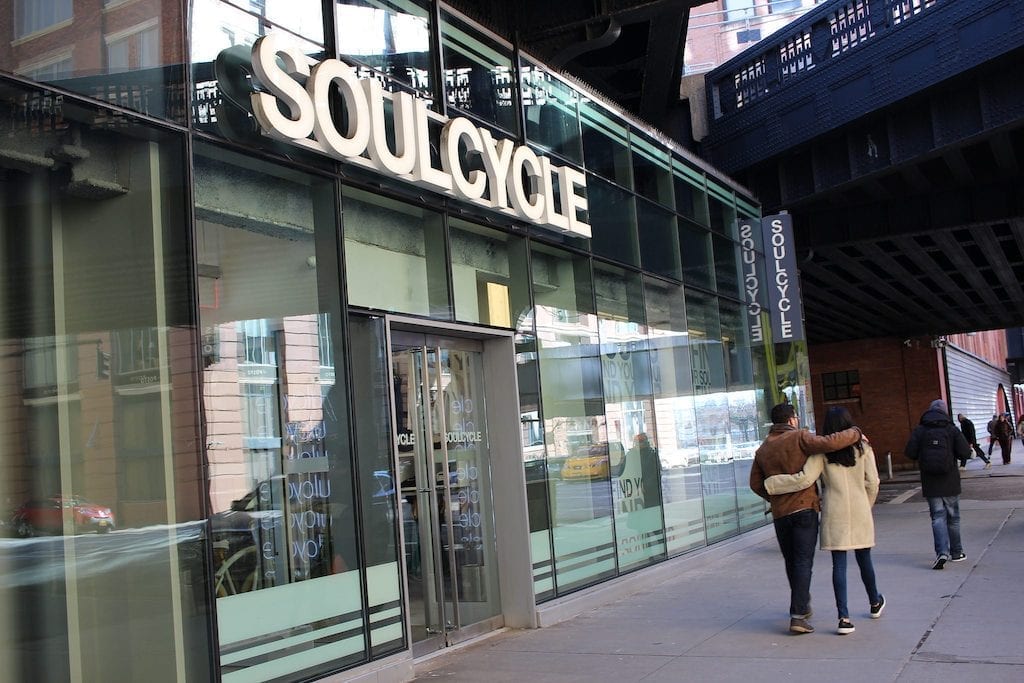 There’s no denying SoulCycle has a huge competitor on its heels. Whether Peloton has surged past the studio-class brand is still unclear. Regardless, SoulCycle needs to find a way to regroup — and fast — if it wants to remain the leader in the stationary cycling space.

Back in 2015, the boutique spinning company SoulCycle was, literally, riding high. It had just filed for an IPO and had about three times as many customers as its main competitor, Peloton (a luxury, stationary bike company with streaming video classes).

Flash forward to 2018, and it’s quite a different story. SoulCycle shelved its plans to go public earlier in the year, and a new report from data company Second Measure shows that Peloton has taken a slight edge over SoulCycle in terms of U.S. customer numbers.

Even though SoulCycle said the numbers are incomplete (although another report from data brand M Science offers similar results), it can’t deny that it has a major threat on its hands.

Plus, it has an obvious disadvantage: Most locations are on the coasts. And while SoulCycle did open new studios in Las Vegas and Denver, it’s hard to compete geographically with a brand like Peloton, which can reach customers virtually anywhere.

Peloton is making a big advertising push over the holidays, so we’ll see if the gap continues to widen. Whatever happens, Peloton’s rapid growth proves that at-home workouts are on the upswing.

Meanwhile, wearable brands like Motiv and Bellabeat are shifting away from strictly focusing on fitness. They see the fitness market as overly saturated and have turned away from targeting the traditional exercise enthusiast customer. Instead, they’re looking to reach people who want to improve their overall well-being and have chosen to sell their devices in stores like Nordstrom and Selfridges rather than focusing on traditional sporting goods stores.

With other classic fitness tracker brands also looking to expand their well-being offerings, it’s a sign that the quest for wellness will only continue in 2019. Peloton Takes a Slight Edge Over SoulCycle: It’s a win for staying in. The at-home stationary bike and streaming fitness company Peloton saw 4 percent more customers last quarter than the in-person studio SoulCycle, based on data from Second Measure, a company that analyzes credit and debit card purchases. It could reflect a shifting tide toward at-home workouts (though SoulCycle says it’s not seeing a decline). Still, SoulCycle should consider it game time. The company would be smart to make a play to lure customers back to its classes –– and find more of them –– considering both companies target the same demographic (big shocker: affluent millennials).

Luxury Giant LVMH Looks to Invest in Will’s, China’s Top Gym Chain: With a sizable investment in Will’s (reportedly $400 million for a controlling stake), the private equity firm L Catterton Asia, which is backed by LVMH, is betting that rising incomes in China will lead to more fitness fanatics. The stats back that up: The number of sports clubs in China is predicted to increase by 12 percent by 2020. Other private equity brands like FountainVest Partners have already made big gym investments in the country, proving it’s a hot (and soon-to-be-sweaty) market.

Wearables Pivot from Fitness to Wellness: Sure, there’s a place in the market for fitness-focused trackers, but startups like Motiv, Oura, and Bellabeat want to position themselves as holistic wellness devices to appeal to a new set of customers (those less inclined to, say, run a marathon or lift serious weights at CrossFit), and take a bite out of the $4.2 trillion wellness industry. Even traditional fitness trackers like Fitbit have transitioned beyond just keeping tabs on workout metrics –– and with Fitbit recently showing its first quarterly profit since the third quarter of 2016, you could say it’s a step in the right direction.

Patagonia Is Giving Its Tax Break To Mother Earth: Talk about putting money where your values are. In a twist of irony, Yvon Chouinard, the founder of the outdoor apparel company Patagonia, announced the company is taking the $10 million in profit it received thanks to Donald Trump’s tax cuts and investing the additional dollars in groups fighting climate change –– whose efforts the president has worked to stymie. It might seem like a risky political move, but Patagonia’s environmental stance hasn’t hurt business. The company’s CEO Rose Marcario summed it up best: “Any time that we do something good for the environment, we make more money.”

Qantas Ups Its Wellness Game With New Dreamliner Planes: Qantas has paid major attention to passenger well-being with the rollout of its new Dreamliner planes, from serving food that reduces jet lag and better in-flight air quality to lighting that actually helps promote sleep. While passengers may not care that their in-flight meals have been scientifically balanced to produce tryptophan, an amino acid that helps with sleep cycles, they’ll likely get behind the fact that there are fewer seats per plane (meaning not as many people snoring or coughing mid-flight).

Lululemon Founder Chip Wilson Is Close to Taking Stake in Sporting Company Amer: First leggings, now sports attire. After stepping down from Lululemon’s board in 2015 (and recently releasing a tell-all book), the Canadian businessman is now partnering with a Chinese investor group for a potential takeover of Amer, a fitness apparel company based in Helsinki. It’s likely a smart move for all parties –– Amer, which manufactures brands like Salomon and Arc’teryx, could benefit from a Wilson refresh, and Wilson, of course, could grow his net worth, already estimated at $3.5 billion.

Founder of Menos Mas Talks Affordable Wellness for Underserved Audiences: The wellness industry has been criticized by many (us included) for focusing primarily on luxury goods and experiences unattainable for most. But Annya Santana, founder of the clean beauty line Menos Mas, which aims to reach black and Latinx communities, wants people to know wellness can work for everyone –– no matter one’s income, background, or culture. In this piece, Santana shares solid advice for accessible wellness (for example, buy in bulk; start running if you can’t afford a gym; support local, affordable juice shops), but it likely won’t stop marketers from pushing the high-end wellness narrative.

Photo credit: A SoulCycle storefront is shown. A new report found that the boutique spinning company has been surpassed by competitor Peloton in U.S. customer numbers. @shinyasuzuki / Flickr