Google Is Rigged. Just Not the Way Trump Thinks It Is. Google clearly places its own travel businesses front and center in its search results to the detriment of competitors. Google argues that this benefits consumers. If you buy that argument, then you also probably believe that Google always knows best.

President Trump caused a stir last week when he tweeted that Google’s search results are “rigged” against him and others, and that Google failed to promote his first address to Congress. He further charged that the power of Google, Facebook, and Twitter represent a “very antitrust situation.”

Beyond the poor grammar, Trump’s allegations were shot down in many quarters, including by Google, although there are calls by Republicans for the U.S. Federal Trade Commission to investigate the search engine for alleged political bias.

In a Google search Friday of “Trump news” — the query he cited before unleashing his Twitter rant — the only search results visible on the first page on desktop were from ABC News, the Washington Post and The Hill, along with three Trump tweets. On the second page were videos from CNN, Fox News, and a Fox News video on YouTube. The next five links were from ABC News (two), CNBC, Fox News, and the Washington Post.

While partisans on both sides and techies who understand search may debate political bias, one thing that is as clear as bottled water is that Google gives preference to its own products, such as Google Hotels and Google Flights, to the detriment of competitors, and squeezes out travel sites’ organic links in favor of paid advertisements.

“We see Google preferencing its own content to the detriment of consumers in travel and local search,” TripAdvisor CEO Steve Kaufer said in a statement. “We’ve been consistent in our desire to help consumers have unfettered and equal access to the most relevant answers to their searches.”

The European Union hasn’t addressed Google’s travel practices yet, but has levied antitrust fines of $2.7 billion for biasing its shopping services, and $5 billion for putting anti-competitive restrictions on Android device manufacturers and mobile operators.

Under the Obama administration, amid reports of heavy Google lobbying, the Federal Trade Commission looked into Google’s search practices but declined to take any action. The commission’s decision in in 2012, the Wall Street Journal reported, came despite the fact that key antitrust staffers wanted to sue after concluding that Google’s search and advertising practices harmed consumers and slowed innovation.

“Google has been unwavering in leveraging their dominance in search to squeeze competition in verticals like travel, local, and shopping,” said Travis Katz, vice president of product at flight search engine Skyscanner. “Fifteen years ago, Google built its reputation on scouring the web to help people find the best possible information. Today, however, whether looking for a cheap hotel in New York or the best flight to Chicago, Google restricts its first page to the companies that pay Google the most, or to Google’s own travel products, which are again pay-to-play.”

A Google search for “Chicago hotels” on desktop shows only paid ads above Google’s own hotel-search business, Google Hotels, which sneaks into view at the bottom of the first screen. 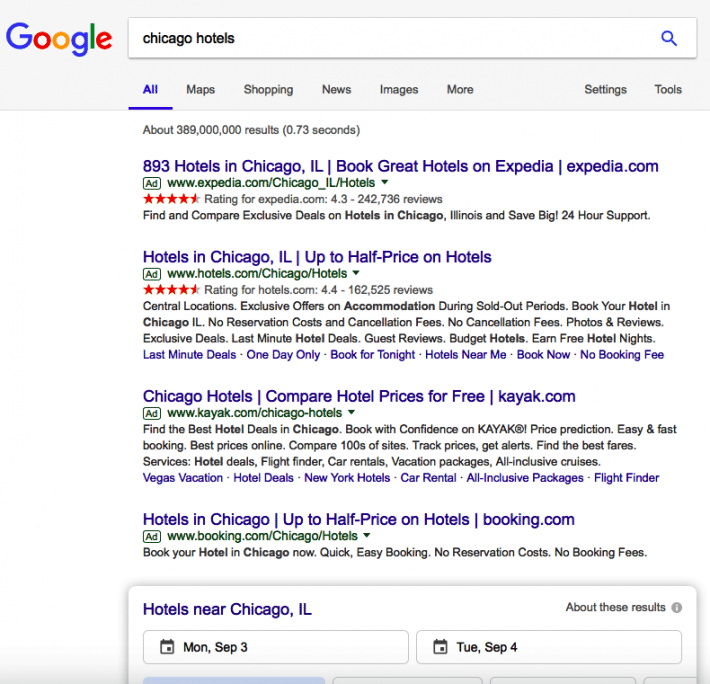 The Google Hotels interface then takes up the entire second screen: Google claims that the above hotel listings are organically generated, but clicking on any of them navigates users into the Google Hotels pay-to-play environment. While some users may click on the free links in the left-most column below, many will click on the paid ads in the center from Hotels.com, Expedia, Suiteness, Priceline, and Travelocity. The point is that Google places Google Hotels front and center in its search results, and you won’t find TripAdvisor, Kayak, Hotelscombined, Hotels.com or Booking.com getting similar treatment. Free links from TripAdvisor, Hotels.com, and Kayak, for example, only appeared on the third screen on desktop.

Google biases its paid advertisements and its own travel businesses in a similar fashion on mobile.

Katz of Skyscanner argued that restricting the first page on Google to paid advertisers harms consumers as well as competitors.

“For consumers, this is bad news,” Katz said. “It makes sites like Skyscanner, which prides itself on always showing consumers the lowest price, harder for consumers to find. And when providers need to pay Google ever-increasing sums for people to find their service, these costs are ultimately passed on to the consumer.”

Like TripAdvisor, business and dining review site Yelp has long criticized Google for its search practices.

“There is no question that Google is guilty of self-serving bias,” said Luther Lowe, Yelp’s senior vice president of public policy. “Google is steering unwitting users into its own local search results sandbox even though those results are objectively inferior according to Google’s own quality scores.”

In addition to the European Union, Russia fined Google over its Android practices, and Italy levied a penalty over the lack of identification of Google Street View cars.

“When Brazilian antitrust authorities recently asked Google why they’re mismatching users with bad information in the most common form of search, Google simply broke the test so people wouldn’t be able to see how egregious their self-dealing actually is,” Lowe said. “By directly harming consumers and extending their dominance from general search into adjacent markets, Google is violating U.S. antitrust laws.”

Google, of course, vehemently denies that it is violating antitrust laws, and argues that it is doing everything possible to benefit consumers looking for the right answers. Products such as Google Flights and Hotels, which are embedded prominently into Google search results, benefit consumers in part because they save travelers much of the hassle of having to navigate over to third-party sites, Google says.

There has been no word on whether the Federal Trade Commission is taking a new look at Google’s search practices, including its travel businesses.

Many of Google’s critics in travel would likely welcome a U.S. crackdown on Google’s business practices, European Union-style. The conundrum might be regulatory overreach if such enforcement were to be swept up in the Trump administration’s anti-big-tech and alleged political bias fervor.

Andreas Reiffen, founder and CEO of retail performance-advertisement firm Crealytics, said the way the European Union has implemented its regulation of Google’s shopping business has “changed nothing for nobody in the market.” He said Google is now required to pay incentives to comparison shopping services when they meet a certain spending threshold with Google, and this has just led to a proliferation of poor quality metasearch shopping services, creating little value.

Reiffen does believe, though, that the tech backlash and Trump’s comments have created a climate in the U.S. where there will be a lot of discussion of breaking up big tech in the next 20 years. However, the U.S. should not follow the regulatory path that the European Union took, he added.

Photo credit: Google's logo is shown on a smartphone. The search giant gives preference to its own travel business, but claims of political bias are unfounded. Bloomberg