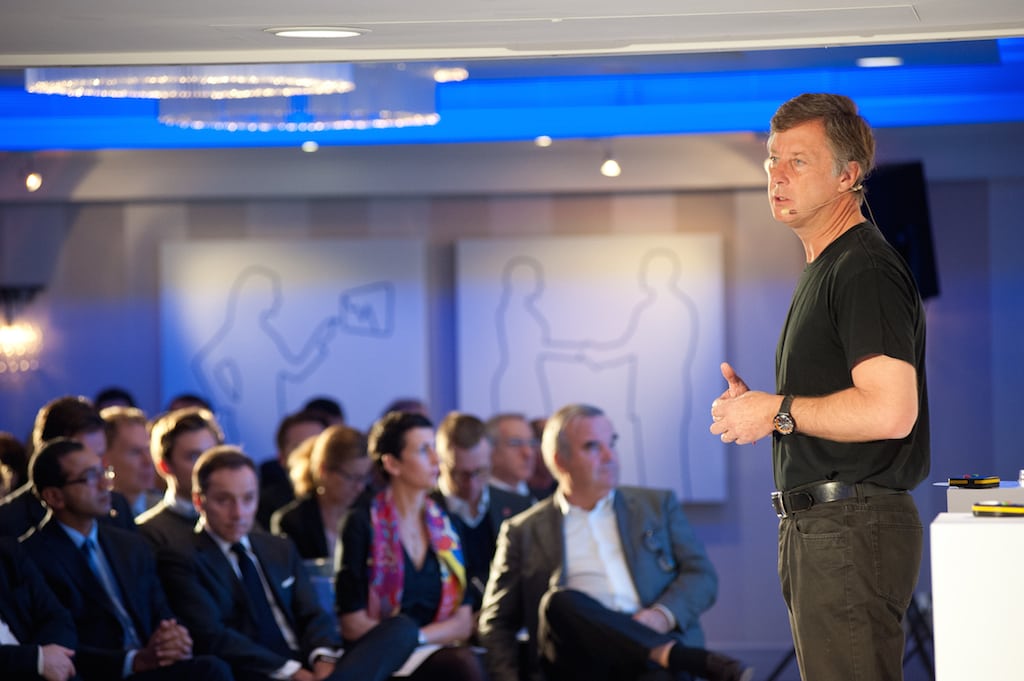 Skift Take
It sometimes take an outsider to identify the mistakes of the past, challenges of the present and game plan for the future. Bazin succinctly describes his perspective on the industry and how he plans to take a multi-national, multi-brand corporation into the future.
— Samantha Shankman
Share
Tweet
Share
Post
Send

Accor Hotels is one of the largest hospitality organizations on the globe and unlike many of its competitors owns and operates more properties than it franchises. The group recently announced a five-year, €225-million digital transformation strategy, which includes a mobile-first customer portal, a new platform for personalizing customer follow-up and service, easier payment and check-in services, and online booking tools for businesses and meeting planners.

Accor reported its first-half profits for 2014 rose 15 percent due to cost cuts and strong demand from the Mediterranean region, Africa and the Americas. The group is also actively expanding with 100 hotels planned for Chinese tourist destinations, 20 hotels under the new Grand Mecure brand planned for the Middle East.

Sébastien Bazin joined Accor as CEO and chairman of the board just over a year ago in August 2013 after building his career real estate investment company Colony Capital. In a recent conversation with Skift, the relative newcomer to hospitality industry talks about where he thinks the hotel brands failed, the four characteristics that define today’s guests, and why he thinks transparency is the key to change within his organization.

An edited copy of the interview is below:

Sébastien Bazin: If I may start on what’s happened to the industry at large, it will explain the reason why we launched the digital strategy. It’s just a matter of 65 years in this industry since the 1950s, of which the hotel operator had been blessed for the first 50 years to be, basically, the sole participant in the value chain. Ninety percent of profit was derived from the hospitality industry with the other ten percent in the hands of the intermediate actors, the traditional travel agent such as Carlson Wagonlit Travel, American Express, and others.

There was a major shift in the last 15 years, during which you had what I call the first revolution. The OTAs started replacing the traditional travel agent and expanding very quickly. Then six or seven years ago came the aggregators, which we call the meta-searchers or the Kayak and Trivagos of the world. They basically aggregated a lot of information and made the booking decision-making process much easier.

Then you had the last revolution a couple of years ago, which I really define as the ‘disruptors.’ This a new customer-to-customer business model, which happens to be Airbnb, Uber, and Lending Club. If you really look at the impact of those 15 years, most of it is customer-driven, guest-driven. It was basically meant to be provide an easier route, easier access, and better decision-making processes for the guest.

As a newcomer to the hotel industry, I do not think we collectively, Accor included, react sooner to the innovators of 15 years ago, the aggregators of six years ago, and the disruptors of two years ago. I’m convinced that there’s going to have a fourth and fifth revolution.

Bazin: It’s very simple. We all felt that the hotel industry would not de-materialize, that the customer would always stay in a hotel if he has to go to the hospitality sector. If you went into the video or book industry, you had that concern because the Amazons and eBays of the world were shipping products directly from your computer to your home. Our industry, thank God, still has the basically receptive end with the customer so we felt that it may impact us, but that it wasn’t going to be that brutal.

That’s still true except you may end up having the customer stay at your shop with very little margin. All those newcomers, when it comes to the Internet players — Trivago, Expedia, Booking.com — none of them want to be in my shoes. None of them want a greater number of associate employees, to have to manage energy cost, maintenance cost, or capital refurbishment.

They think smart enough to understand the value-added chain; however, what’s interesting is that all of them depend on me existing. Without the guy who actually receives the guest, the value chain is never going to exist.

Skift: I’m interested in exploring whether consumer-facing and the back-end technology is more important or more effective and how they work together to improve the guest experience. What role does each of this type of technology play in improving the experience?

Bazin: They work in tandem, one is dependent on the other. You know that the customer is going to have a very efficient device on him. Through that mobile device, you can have online check-in, a confirming text, and send him a room number. You can make the customer feel that he has been identified, waited for, and received a personalized service.

In order to get that feeling through to your customer, you need hotel employees to have the same devices to be able to interact with the client and understand how those devices work in order to perform better, be more efficient, and be proud of having the same access and technology. Whatever my guest has, I need my personnel to have the same technology and access to information.

Skift: How has the hiring experience and process changed or evolved to match these changes in the guest experience?

Bazin: The technology permits me to be much more global, much more efficient in terms of speed and scale in selecting personnel and getting people to come to Accor Group through accorjobs.com. It has offers being made in 94 countries. Also, I can now actually follow the career of my personnel across departments. I get a record of what they’ve done. It’s more efficient for me and more rewarding for the associates of Accor, because they know that we follow what they do each year.

Skift: Has anything changed in the type of people that you hire? As technology plays a larger role on the back-end of hospitality, does that impact who you hire?

Bazin: I think everybody would like to say, “Yes,” but I’m not going to say, “Yes.” It’s not because someone does not have any technology skill that that person should not be hired. Thank goodness we’re still living in an industry, which I call a “warm industry.” The level of empathy, friendliness, and capacity to listen to your guest is far greater and far more critical than being a technology geek.

I need some good technology experts to come in, because they’re going to be knowledgeable and creative, but the vast majority of people working in the global hotel industry have to understand technology without needing to be an expert.

Skift: Accor is present in 92 countries. How does the guest experience change depending on which region the Accor property is located in? Do guests have different demands in different parts of the world?

Bazin: Yes, wherever you have mobile devices in a great number and as a greater percentage of the population, the guest has more expertise on how to use it and is more demanding because they are aware of the different services, concepts, designs and hotels. In the Middle East, for example, it’s 95 percent adoption rate. In Africa, I think it’s half of that.

If you don’t offer a guest what they’ve experienced someplace else then obviously you deceive them. In places where there is less technology available, guests don’t have the same awareness so they’re not as pick as they can be elsewhere. This is why the Internet has entirely changed customers’ expectations. They know much today about what exists in the hotel industry that they didn’t know ten years ago.

Skift: What other changes have you seen in guest behavior?

Bazin: We know for a fact that customers today are going to be multi-brand and multi-segment so the level of loyalty to us or some of our competitors is getting lower and lower. They have multiple loyalty cards with multiple groups. We also know that customers we be connected in terms of global information 24 hours a day, 365 days a year.

Guests are becoming more and more autonomous in their decision-making processes and they’re becoming more and more community-oriented. For example, 75 percent of guests will share good or bad experience. When you accept those four points — multi-brand, connect, autonomous and community-oriented — you better not fail. Don’t give them a reason to not follow you.

Skift: Have you seen loyalty decrease at Accor hotels?

Bazin: It’s not going down because we’re making a very big effort towards being more disciplined and rigorous, offering better soft benefits, and having guests understand that they get the exact same price going through accorhotels.com as they would get otherwise. It’s about making them feel more and more identified, recognized, awaited-for.

I’ve spent the last year preparing for our digital strategy launch. The three phases are very simple. First is make a diagnostic of what happened to the hotel industry over the last 20 years. Second is have a vision for where we want to be in ten years and what it is ywe should be doing differently. Third is make sure you have an action plan, a four or five-year period with human capital and financial resources.

In today’s world, you have to be extremely didactic and disciplined in launching those programs and being transparent about it. I don’t know whether we’ll do a good job or a bad job, but at least for anybody who wants to watch what Accor is doing, they have it on paper. It’s been outlaid and we’re going to executive on it.

We have a great benefit as we directly operate and manage 70 percent of Accor’s network. Most of my competitors contract 65 percent of their properties. If you are in a contract, you don’t have your hand on the operations. Since Accor is the operator for more than two—thirds of its properties, it’s my people on the ground and my responsibility.

Skift: Are there any plans to operate even more of the portfolio or move towards more of a contract model?

Bazin: No and I’m not saying that one business model is better than the other. I respect the franchise model, leasing model, matching model, and owned model. They all have a good merit. We, at Accor, started with the DNA of being an owner and operator, which probably has something to do with being away from America where the franchise model has been for a long time.

My model has greater volatility and greater number of personnel being under my scope, but when it comes to making a transformation, I probably have more maneuverability than another model. I say this, again, without any critique on one versus the other.