This past week, AT&T quietly pulled out of the in-flight internet race that they awkwardly entered earlier this year. It was a surprising move when they launched — the company planned to use an air-to-ground network to supply speeds similar to what’s currently on the market — except everyone else had fully mature products and was innovating past that.

Between the cost of implementation and other business developments, apparently AT&T decided that in-flight Wi-Fi wasn’t worth the bother. For the current providers that’s great news, and Gogo, which currently manages the lion’s share of business in the US is probably ecstatic.

For the consumer, our only concern should now be focused on price. As a person who just paid $6.99 for (United/Panasonic) service between SFO and SEA, my concern is that we’ll someday be exposed to the monopolistic tendencies of one belligerent airline or signal provider. We all have to get work done inflight, but how much is too much?

I just boarded a tiny ancient toothpaste tube that is apparently also a United plane. Take a look at the new Delta domestic First Class seat: It’s an interesting design, and I’m more of a fan of this than the previous dull blue one. Read more at The Forward Cabin

U.S. Airlines Sue Port of Seattle Over Airport Workers Wage Hikes: U.S. airlines are suing the Port of Seattle to block planned pay increases for airport workers, in the latest legal battle over efforts to better compensate workers in a state with the highest minimum wage in the country. Read more at Yahoo News

New Options for Delta Flyers at SFO: Delta flyers at SFO can now take a yoga break, partake of local organic food and wine or check out a cool museum space at SFO. Read more at Travel Skills 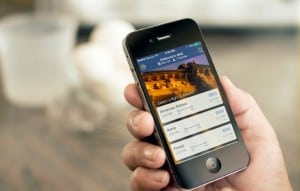 Tourists to Encounter Higher London Transit Fares Next Year: London underground and bus fares will increase by an average of 2.5 percent across the city’s public transport network next year, while all-day tariffs for Oyster card holders will decline by as much as 31 percent. Read more at Skift

Mobile Will Rival Desktop for Digital Travel Research by Next Year: eMarketer projects 2015 will be a major turning point for how travelers research their trips, predicting nearly half of digital travel researchers will check out flights, hotels and more not only on a desktop or laptop but also, or only, via mobile. Read more at Skift CheckMate Gives Hotels a New Way to Connect With Guests Before Arrival: Hotels using the CheckMate guest engagement platform potentially can start to make some inroads in reaching out to those customers through deals that CheckMate has signed with Expedia, Kayak, Travelocity, Orbitz, Sabre’s TripCase, and Concur, says CheckMate co-founder and CEO Drew Patterson. Read more at Skift

Headless Pineapples, Paper Hats and More Small Ways Hotels Go Green: New York’s Waldorf Astoria is known for its historic significance and old-school luxury, but behind its well-maintained decor is an innovative approach to environmental and social responsibility. Read more at Skift

Lest you think the Skift Business Traveler is too soft on Gogo, Cory Doctorow from BoingBoing has a pointed story on how hard it is to cancel their recurring service. Take a read here.