Millennials A Hard Sell for Hotels Despite All the Wooing Skift Take
Hey, it isn’t all about refurbishing the hotel lobby and placing a touch-screen in there. Millennial guests demand great customer service from staff, and they will quickly sour on a hotel if the staff isn’t up to par.
— Dennis Schaal
Share
Tweet
Share
Post
Send

Despite all of the rhetoric about lifestyle-hotel brands and big chains going all-out to capture the allegiances of Millennial travelers, they are proving to be more critical of their hotel stays than other guests, especially if it is the first time they have experienced a specific hotel brand.

That was one of the findings in the J.D. Power 2014 North America Hotel Guest Satisfaction Index Study. The survey, based on responses gathered from June 2013 to May 2014 from 67,000 hotel guests in North America, found that Millennial (or Gen Y) hotel guests having a first experience with a brand expressed overall satisfaction with that brand that was 29 points lower than Millennials who had previously stayed at one of the brand’s properties.

Millennials were more critical of their hotel stays than other demographics, but not necessarily less loyal, the study found.

J.D. Power, which measures guest satisfaction on a 1,000-point scale, found that the midscale hotel segment — which includes brands such as Holiday Inn, Drury Hotels and Clarion –– notched the largest improvement in 2014, increasing its overall score 10 points to 801.

The study, which measures everything from reservations to costs, and food & beverage to guest rooms, found that guest satisfaction improved for all hotel segments except for the upper extended stay and extended stay sectors, where satisfaction levels were flat.

The following brands had the highest and lowest guest satisfaction scores for each segment: 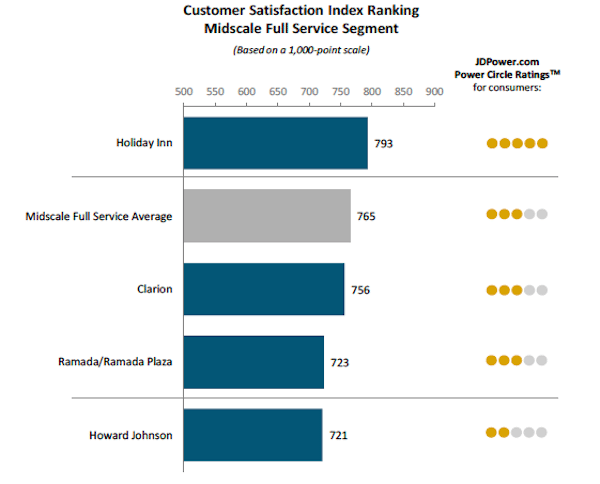 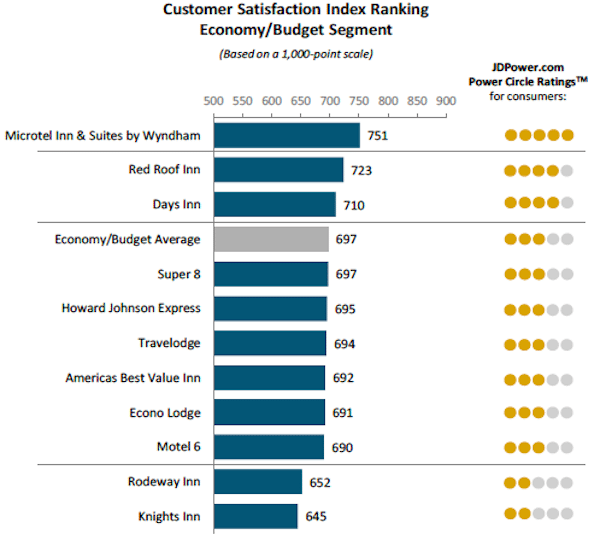 Subscribe Now
Tags: economy, extended stay, luxury
Photo Credit: Millennial travelers look to get a lot out of their vacations and hotel stays, and are a demanding bunch as hotel brands in North America are finding out. Holiday Inn