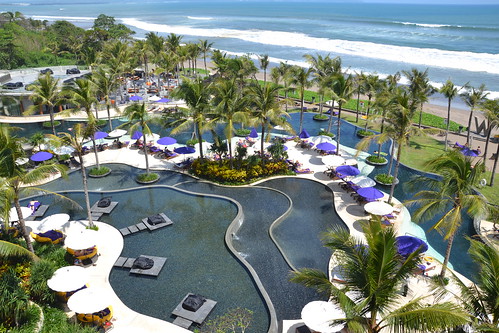 The W Hotel in Bali is one Starwood’s numerous properties in Asia. Photo by Simon Sees.

Competition among hotel operators, workers choosing to seek jobs overseas and a lack of suitably trained employees have contributed to the shortage, Imbardelli said. The industry also loses workers to banks, insurance companies and airlines, which are focusing more on service and presentation, he said.

“The single biggest challenge we have is the talent crunch,” Imbardelli said in an interview in Singapore on Oct. 19. The shortage is across the board, from front-office managers to top management, he said.

Pan Pacific, Starwood Hotels & Resorts Worldwide Inc. and Marriott International Inc. are among chains building more hotels in Asia as travel to the region increases. More hotels and a lack of experienced workers for the industry is “a big squeeze on profitability,” said Robert Hecker, Singapore-based managing director of Horwath HTL Asia Pacific.

Hotels in Asia will have to spend more money on marketing to attract new workers and take on the costs of training them, Hecker said.

“There is a huge pipeline of new hotels,” Hecker said. “It probably means that market occupancies are going to be coming down because supply is increasing faster than demand, so that puts a crunch on the revenue side, combined with increasing costs to staff.”

Pan Pacific, controlled by Singapore billionaire Wee Cho Yaw’s UOL Group Ltd., was unchanged at S$2.26 at the close in Singapore. The stock has advanced 22 percent this year and the parent company has gained 45 percent, surpassing the 15 percent increase in Singapore’s Straits Times Index.

Pan Pacific owns about 30 hotels, resorts and serviced apartments globally. In Singapore, where the group has eight properties including those under its Park Royal brand, the government’s tightening of rules on foreign workers has hurt the industry’s ability to hire more workers, Imbardelli said.

The island city has made it more expensive for companies to hire overseas workers by raising levies, and in the past year it has increased salary thresholds and required better educational qualifications for some categories of foreigners.

After a recent S$100 million refurbishment, Pan Pacific Singapore had to open restaurants and bars in stages due to a lack of staff, Imbardelli said.

Pan Pacific is conducting more training to retain workers, “creating roles around people for them to learn,” Imbardelli said. There is “a lot more focus on succession planning, a lot more focus on developing the people,” he said.

Pan Pacific is focusing its expansion in Asia, he said. The region’s carriers flew 7.9 percent more passengers on international flights in the first eight months of this year, according to the Association of Asia Pacific Airlines. Growth in Asian economies is still encouraging both business and leisure travel in the region, the association said last month.

“Asia’s travel is growing at a faster rate than ever before, the one region that grew so much over the past 10 years and continues to grow,” Imbardelli said.

Starwood, owner of the luxury St. Regis and W brands, will open a new hotel once every two weeks in China this year and next, CEO Frits van Paasschen said in a Bloomberg Television interview in September. Starwood will have 320 hotels in Asia by 2014, according to a Sept. 20 statement.

Marriott, the largest publicly traded U.S. hotel chain, plans to add about 110 hotels in the region, which Chairman Bill Marriott said in a June interview is a bright spot that “continues to boom.”

Half of Pan Pacific’s properties in Asia are owned by the hotel. The company plans to cut the proportion and manage more hotels than it owns in future, Imbardelli said, without giving a timeframe. “There are people who like our brands and want to invest behind the brands,” he said.

Pan Pacific added an average of four to six hotels a year and would like to continue at the same rate globally in the “mid-term,” Imbardelli said. The chain runs a Park Royal hotel in Yangon and Pan Pacific properties in Manila and Bali.

The group has two hotels under construction in Singapore and three in China, he said, which will be completed in the next six months.

“The hotels will proceed because the labor staffing is not a consideration at that point and they will find a way, effectively, to deal with that crunch,” Hecker said. “I don’t think labor will slow down hotel growth.”