It is not the first time Ian Schrager has attempted to brand Public as the next big thing for hotels with its “luxury for all” mantra. But the pandemic primed the travel market where this kind of high-end, limited-service brand has a real shot at growth.

The “before its time” label may be a cliché, but the pandemic proved hotel and nightlife legend Ian Schrager’s Public hotel brand really was a concept people didn’t know they wanted.

Public isn’t new. Schrager first launched the brand with a Chicago hotel in 2011 and was claiming the brand would offer affordable luxury — similar to the “luxury for all” mantra he’s proclaiming ten years later. That property eventually rebranded under new ownership, and the hotelier opened a New York Public in 2017.

For the previous iteration of Public, Schrager touted the benefits of technology to cut down on human interaction in areas like check-in and check-out. The New York Public suspended operations last year during the pandemic, but Schrager relaunched it earlier this month with the same intention of showing a new side to luxury hotels. The timing may be just right to move ahead with his long-awaited growth plans.

“We’re in the final chapter of reinventing luxury and service and getting out of this one-size-fits-all notion,” Schrager said in an interview with Skift. “This new idea of rethinking service and rethinking how you provide food and beverage — those are the two things Public is offering.”

Public is meant to have the soul of a luxury hotel with the heart of a select-service hotel, he added. There has been some head-scratching in the press about what exactly this means. 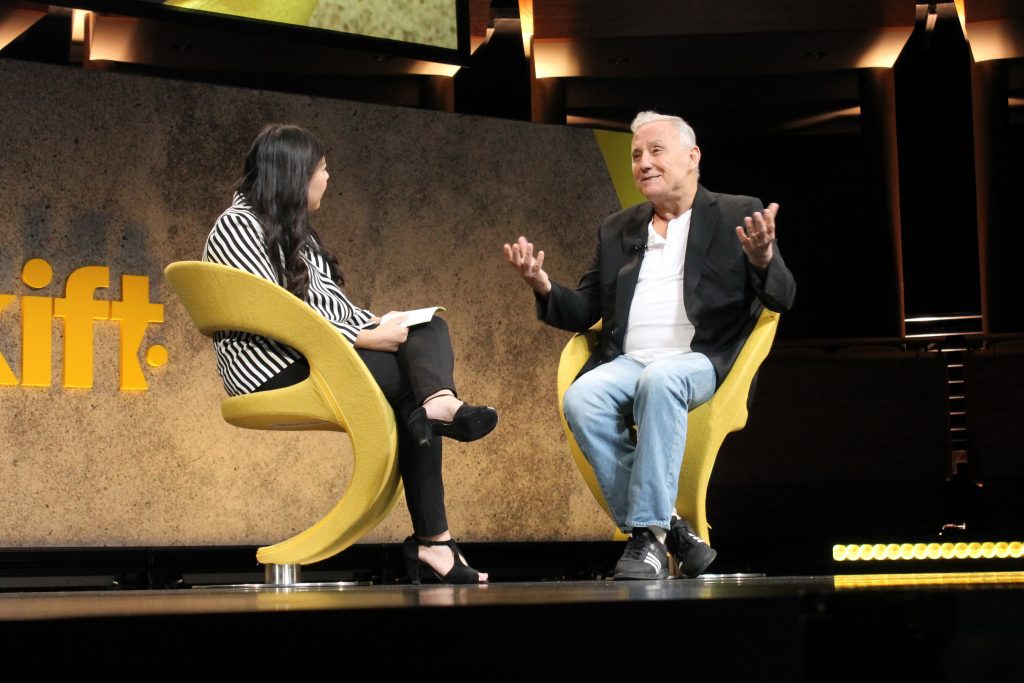 Select-service typically means a property is devoid of amenities like full-service restaurants or spas, but the New York Public includes several food and beverage outlets like Peruvian fusion restaurant Popular and more on-the-go concepts like Louis.

This being a hotel created by Schrager, who became famous for owning the legendary Studio 54 nightclub before going on to found Morgans Hotel Group, there are also bars and lounges in the lobby and on the rooftop.

Many of the technology features Schrager has called for with Public have become industry standards during the pandemic: mobile check-in and check-out, mobile room keys, and calling for guest preferences around how often rooms are serviced during a stay.

“The benefit of the pandemic was that people wanted contactless check-in,” he said. “People want to get up to the room in the same way they get up to their apartment and office. They don’t want to sit down and have a glass of champagne.” But there are opportunities for further innovation and tech around the food and beverage space that would similarly cut down on guest-employee interactions — and labor costs — Schrager said. Think along the lines of a modern take on the automat restaurant once widely prevalent throughout New York City.

“I kind of think it’s the future, and it’s not only for rich people,” he added. “It appeals to a sensibility — not just a certain demographic and not like these hundreds of brands out there that mean absolutely nothing to people.”

The Future of Luxury

Schrager’s Morgans Hotel Group was widely seen as the beginning of the boutique hotel movement along with Kimpton in the early 1980s.

But while Morgans and Kimpton had years of operating in the boutique space before major brands like Marriott wanted in, Schrager doesn’t think his tech-focused, “luxury for all” concept will be alone on the frontier for long. Schrager thinks Public has a chance at transforming the luxury market, which he sees as congested with too many overlapping brands. Instead, the hotel operator sees luxury hotels eventually evolving to more of a Public model at one end with the potential to also incorporate some residential aspects.

The other side of luxury would simply cater to ultra-wealthy individuals who are willing to pay high rates for hotel stays and services reminiscent of where they live.

“There shouldn’t be this proliferation of brands that are meaningless to people and set no level of expectation of what you’re offering,” Schrager said.

Schrager is one of the hotel leaders who fostered the ongoing rise of the so-called luxury hotel, properties focused more on food and beverage and experiences. But while there is debate around what kind of customer hotel brands are chasing with their lifestyle concepts, Public is meant to cater to a wide customer base.

“We’re appealing to people of all ages, who happen to get what we’re doing, in the same way that a product appeals to a 78-year-old Mick Jagger as it does to a Miley Cyrus,” Schrager said. “When they ask me for a comp set, it’s hard for me to come up with one, because we’re competing against five-star luxury hotels, and we’re competing against the select-service.”

While Schrager may see Public as an unparalleled brand, he does expect it to take a similar growth trajectory as some of his other hotel brainchildren like Edition.

He wants to develop as many as 10 Public hotels around the world in the next five years before considering a partnership to allow it to “expand very aggressively.” Schrager’s partnership with Marriott once envisioned Edition growing to a 100-hotel portfolio.

There is debate in the hotel world around whether lifestyle brands lose some of their luster when they get absorbed by a global hotel conglomerate. But Schrager believes partnerships with major companies are key in marrying the cool factor in brands he creates with the profitability needed for longevity.

“I think the exciting ideas come out from the innovators and the big companies, you know, are really more about execution. Maybe a marriage of those two is a good thing,” Schrager said before adding with a laugh: “You have to take a look and see whether or not you think that person is going to be able to make sure there’s not too much meat on a ham sandwich when it gets sent down to the dining room.”

Photo credit: Ian Schrager wants to marry some aspects of select-service hotels with the luxury sector with the relaunch of his Public hotel brand. Ian Schrager Co./Public