Hotels Hope Profits Are Cooking in the Ghost Kitchen Business The pandemic has produced unlikely partnerships between the hotel and office sectors, but the longevity is up for debate. The ghost kitchen pairing between hotels and an outside food operator may actually stick for years to come, as it solves a pre-pandemic revenue loss problem.

Hotel room revenues may have tanked during the coronavirus pandemic, but some leading operators in the industry hope underutilized kitchens can pave the way for future profits.

Even before the pandemic depleted hotels of high occupancy rates and coveted business like corporate travel and conventions, full-service hotel owners struggled with food and beverage programs generally operating at a loss. While necessary for amenities like room service, on-site restaurants were often scaled back to generally operate on limited hours or even just for breakfast to stop some of the financial bleeding.

Those underutilized spaces now may become a rare segment of profitability while the global hotel industry lumbers along an uncharted pandemic recovery path.

“It’s about understanding what the need is and understanding that hotels and their kitchen infrastructure sits around great communities that need great food,” said Sam Nazarian, the SBE founder who now owns the C3 food and beverage platform company. “You can really unlock the value of that kitchen in addition to providing a branded, in-room product.”

After selling his remaining half of SBE’s hotel business to Accor last year, Nazarian is focusing on C3, which stands for Creating Culinary Communities. A rapidly growing component of C3 is its ghost kitchen business, which operates multiple food brands for delivery from a single kitchen. First launched in 2019, the company has roughly 200 ghost kitchens with plans to expand to more than 450 by the end of the year.

Hotels are a key part of achieving that growth. C3’s hotel expansion strategy is to partner with the owner of a hotel that has a great location and restaurant but isn’t necessarily known for being extremely popular with local diners.

“It’s an opportunity to start making a return on investment and helping these hotels in the current environment where every dollar matters,” Nazarian said.

While deals vary, C3 generally partners with hotels in an even-split revenue sharing agreement on its ghost kitchens. Other companies like Butler Hospitality take over a hotel kitchen and use it as a central hub for room service to both the property it operates within as well as to surrounding hotels via delivery.

There are some capital requirements in bringing a hotel kitchen up to C3 standards, from technology platforms to customized equipment like the robotics needed for its Krispy Rice sushi brand. Ultimately, chefs are cross-trained to be able to make items from each of the eight available food brands like Umami Burger and Minük by Dani Garcia.

Once up and running, the kitchen operates as both the in-house dining for the hotel as well as a hub of operations for food delivery to the surrounding neighborhood.

“In some cases, we’ve taken over kitchens that are new and the owner of the hotel says, ‘I don’t want to be in the full-service business anymore. I’m done. I want to be in the beverage, banquets, and rooms business. Have at it,’” Nazarian said.

Accor owns 15 percent of C3, and Nazarian noted there is a significant kitchen development pipeline in their hotels in the U.S. and abroad, mentioning Sofitel and Fairmont specifically. But major global cities aren’t the only source of business for a ghost kitchen concept.

Graduate Hotels, a Chicago-based company with 30 boutique hotels in U.S. college markets, is another C3 partner. 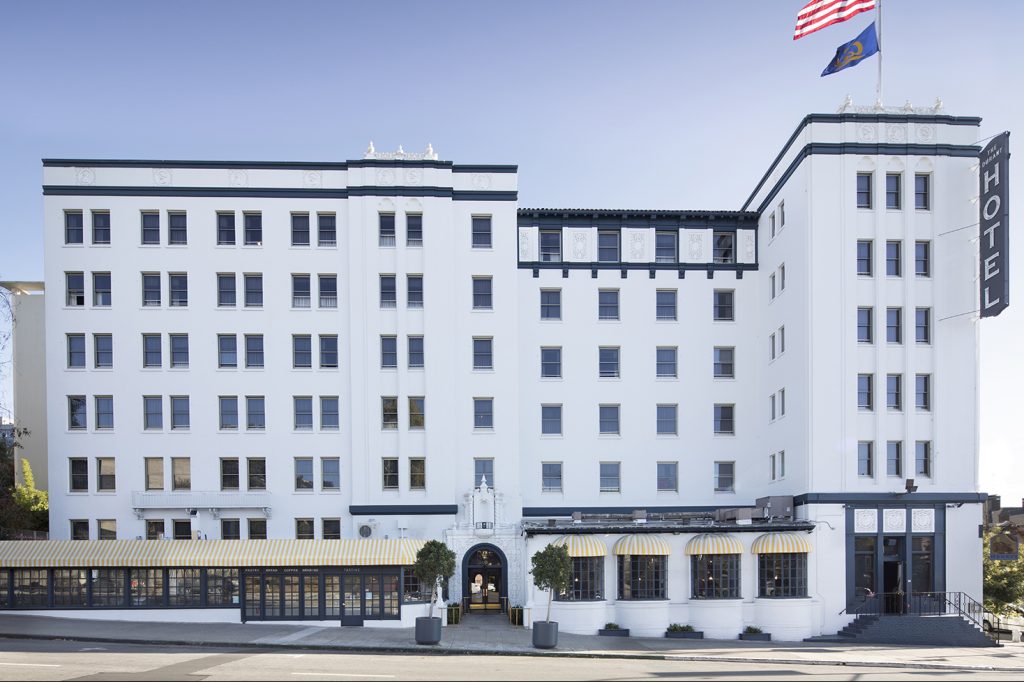 “Pre-pandemic, we were starting to explore what that meant for us. From a food and beverage perspective, we thought delivery could be bigger than our standalone concepts,” said David Rochefort, president of Graduate Hotels. “Of course, the world hit pause and it gave us the opportunity to really look at this and think critically.”

The C3 partnership with Graduate Hotels will launch with the company’s Berkeley, California, property before eventually rolling out across its entire network. Graduate’s leadership team anticipates it will create an added revenue stream, particularly in smaller college towns where there isn’t a major third-party food delivery service currently in operation.

The partnership also cuts down on time spent figuring out what kind of restaurant to put in a Graduate Hotel in smaller markets like Charlottesville, Virginia. One of C3’s kitchens can handle up to eight brands at once.

The ghost kitchen partnership isn’t the only one to emerge from the pandemic. Struggling hotel operators are also offering up underutilized hotel rooms as office space to rent at a time when most people are staying away from their traditional workplace.

Major brands like Hyatt, Mandarin Oriental, and Marriott and smaller companies like Proper Hospitality all have some variation of the work-from-hotel concept. Coworking provider Industrious even formalized its hotel-office concept with a recent partnership at a New York City hotel.

But there is debate among the hotel and office communities as to how long-term a revenue stream that could be. There is less of that uncertainty in the hotel and dining world toward ghost kitchens, as it potentially solves a pre-pandemic revenue problem.

Ghost kitchens offering a reliable revenue stream to hotel owners draws comparisons to WeWork. The coworking giant took on massive office leases around the world in the run-up to the pandemic and served as a middle-man between landlords and tenants before a major crash during WeWork’s failed bid to go public in 2019.

But there is still general support for coworking and many elements of WeWork’s model.

“What [coworking provider] WeWork did for office space, hotels are now trying to do with their kitchens,” Karaburun said. “That’s the mentality: How can we maximize this space and repurpose this space in a pandemic?”

Branded and elevated food and beverage programs like this were key to unlocking revenue potential, Skift reported in 2019 after companies like Jumeirah and Standard International tapped Michelin-level and celebrity chefs to run their F&B.

Leaders at Graduate Hotels are so taken by the concept that they’re already anticipating future changes in hotel layouts thanks to the ghost kitchen pairing.

“The real estate developer in me thinks, if this takes off like we think it will, you could see us think about space a little differently, like in how we design a kitchen in terms of the delivery driver pick-up experience,” Rochefort said. “How do we make this a frictionless process?”

Photo credit: The Graduate Berkeley (pictured) is the first to host a multi-branded ghost kitchen in a partnership between parent company Graduate Hotels and C3. Graduate Hotels