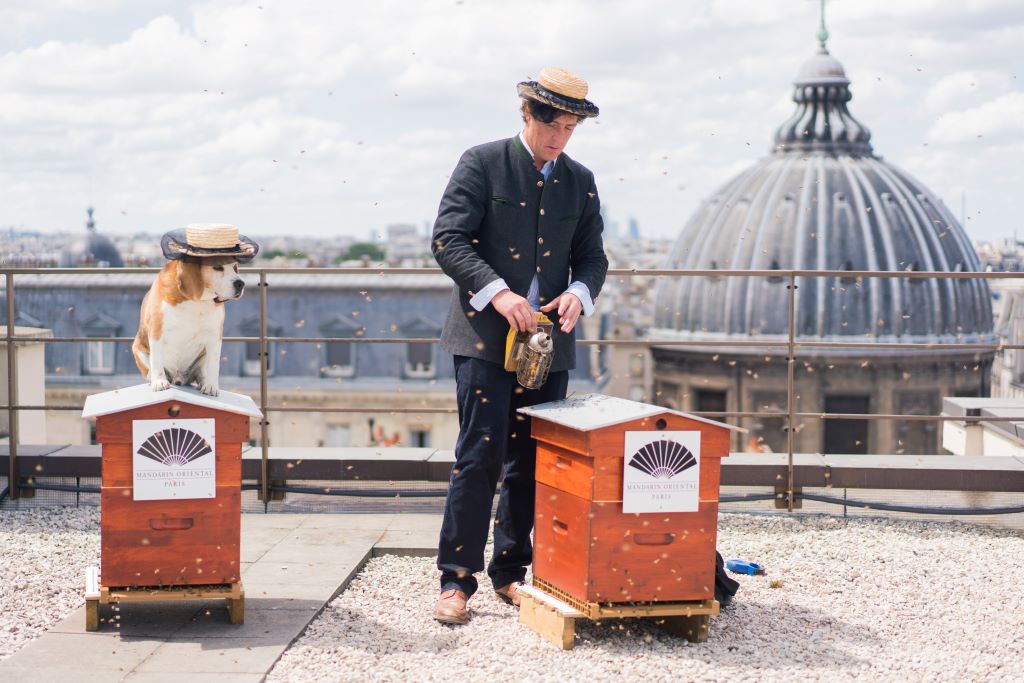 The Mandarin Oriental, Paris, has some very special guests on its rooftop: bees. Someone has to take care of them. Enter this marketing man turned beekeeper who has no fear of heights — or bee stings.

Audric de Campeau studied medieval philosophy at the Sorbonne in Paris. He followed that with two years in business school.

His career path diverged wildly from there. The 36-year-old Parisian worked in marketing and public relations for a luxury watch company. But after spending time at his parents’ home in Champagne, about an hour from Paris by train, he grew to love the outdoors. It was there that he started growing vegetables, planted an arboretum, and made wine.

Surrounded by all that nature, he came up with another idea that he believed would help the environment even more — to tend to beehives. Bees, after all, pollinate all types of crops around the world.

“Bees are the live symbol of biodiversity,” he said. “Urban (areas) are in need of nature.”

Urban beekeeping has become popular in the United States and worldwide as more people realize its environmental benefits. Many hotels have beehives on their rooftops, using the honey that is produced in cocktails, restaurant dishes, and even spa treatments.

De Campeau installed his first hive in the woods near his parents’ house in 2005. He has now branched out to about 300 public buildings in Paris and Versailles, including the Mandarin Oriental, Paris.

De Campeau has had no formal training in beekeeping but is now considered one of the best beekeepers in France.

“I learned by myself and YouTube, with a lot of stings in the beginning,” he said.

Regardless of those stings, he said he is now “absolutely in love with these fascinating insects.”

“When you open a hive, you’re moved into another world, out of time,” he said. “And I have the best office in the world: the roofs and the sky of Paris.”

On the Rooftop of the Mandarin Oriental

One of those roofs he works on is that of the Mandarin Oriental, Paris.

De Campeau installed two beehives on the rooftop of the hotel, which opened in 2011.

“Introducing bees within the hotel was an important measure we’ve taken since the first day to protect biodiversity and stick to our goals of being eco-friendly,” said Emilie Pichon, director of communications at the hotel.

The hotel has gone from having 50,000 bees to more than 100,000 bees. Each year, the hives yield about 70 to 90 pounds of honey, which Executive Chef Thierry Marx and Pastry Chef Adrien Bozzolo use in the hotel’s recipes.

The hotel’s Bar 8 also offers a signature cocktail, the Zhenzhi, which means pearl in Chinese. It is made of Tequila Avion Silver, almond milk, matcha tea syrup, and honey brewed with jasmine tea.

“The entire life of the hotel is organized around this goal of creating a sustainable future and creating a variety of unique, interesting ways to do this — such as introducing a bee population within the hotel to protect the biodiversity,” Pichon said. “Bees are an important part of the pollination cycle and often thrive in urban environments such as Paris, which has been a pesticide-free zone for the past 10 years.”

A Day in the Life of a Beekeeper

De Campeau’s work schedule depends on the season. Spring is his busy time of year.

“We open the hive very frequently to avoid swarms,” he said.

He doesn’t open the hives when it’s raining or windy or before a storm. In the winter, there isn’t that much work to do on the hives.

During the summer, the job gets difficult because the honey is heavy.

When keeping bees in the countryside, he can park his car right next to the hives. Not so in the streets of Paris.

“So we carry a lot, through stairs and buildings,” he said. “Urban beekeeping is a job for rugby men.”

Working with bees would probably frighten most people. But de Campeau has no fear, partly because he keeps the mild-tempered Buckfast bee.

“The only real danger could be to fall from a rooftop,” he said. “That’s why we are equipped as mountaineers in a lot of places, with a harness and ropes.”

He doesn’t wear the elaborate protective gear many beekeepers use that look like hazmat suits. He does wear a hat with a net.

“I don’t like the normal gear because it’s really hot on rooftops, and because I work with a very sweet type of bee,” he said.

He keeps gloves in his bag but he tries to avoid using them.

“I prefer to work bare-handed to be more sensitive and quiet with them,” he said. “The worst thing that could happen on a beehive is the panic. They feel your panic immediately.”

The married father of four young children said his family doesn’t mind that he left the comfortable world of marketing to work on rooftops with insects that sting.

“My family already knew that I was a bit crazy,” he said. “They were used to it.”