Boutique brands are discovering that creating splashy grand openings is a way to build buzz while creating community connections. Expect more investment in these one-time celebrations.

Parties, public events and puppy portraits are just some of the ingredients new hotels are tossing into their grand openings as they look to make a positive first impression.

Many lifestyle hotel brands are discovering that opening celebrations are a perfect way to build buzz, while developing links to the community. That’s why hotel grand openings are going beyond cocktail soirees, and turning into spectacular events including everything from acrobatic shows and concerts to multi-course meals and group exercise classes.

These events come with a big investment that few hoteliers are willing to numerate. Despite the fact that return on investment is difficult to measure, several brands are banking on the fact that their impact is worth it.

“Like any brand that launches, we look for ways to introduce ourselves and connect with the audience that we would like to see coming to our hotels; to create this halo effect on each of the properties and, of course, the brand,” said Ben Pundole, vice president of brand experience at Edition Hotels, who heads the team that conceives and creates opening parties around the world.

The aim, he said, is to throw what founder Ian Schrager called “a festival of events, [which] is a great of way to interact with people from art, film, fashion, music, philanthropy, and theater. I think people have come to expect that from Ian Schrager and Edition. It’s something that works for us and amplifies the message of the launch. And it’s really fun.” 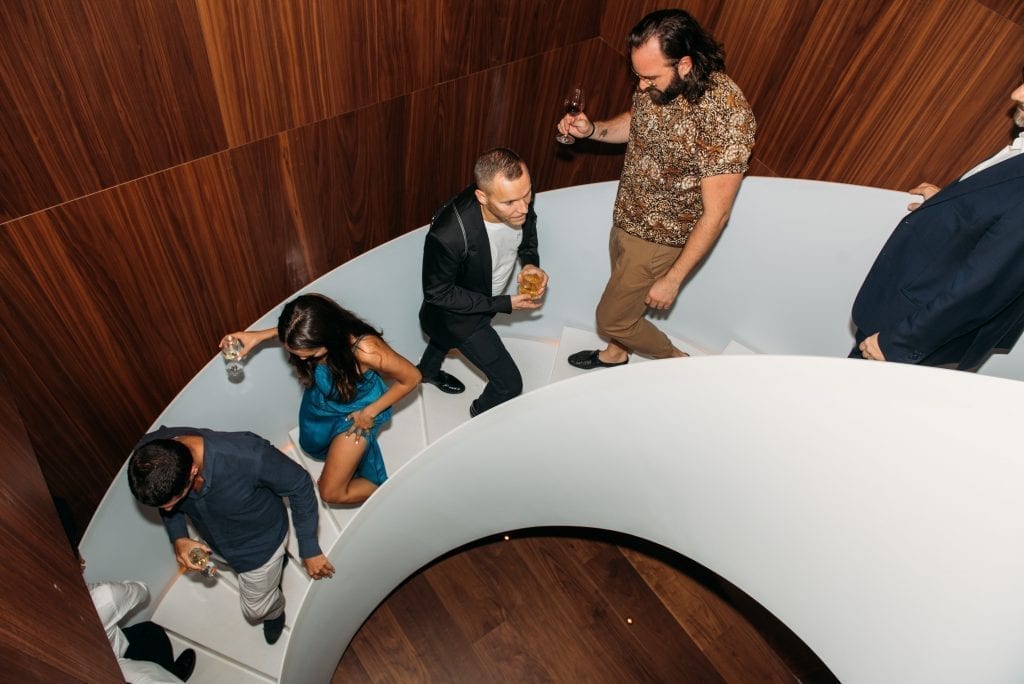 The spiral staircase at The Edition Barcelona throughout opening week.

A Festival of Events

There are several steps that go into conceptualizing and organizing events of this scale, including the timeline for planning, the budget, and the launch date. Pundole and his team look for potential local partners, consider the format of the evening or evenings, and tailor depending on location.

“It is certainly not formulaic. We start anew at each hotel, which is actually the most exciting part because we get to see what resonates in each location,” Pundole said.

For example, Pundole’s team partnered with La Furla dels Baus, a kind of Catalan Cirque du Soleil, for a performance at the opening of Edition Barcelona in September 2018. The performance helped publicize both the hotel and its cabaret club. All of the guests at the Edition Barcelona opening left the building for a surprise live show from Catalan theater group La Furla dels Baus.

To mark the opening of The Edition Times Square in March 2019, Pundole’s team looked to the brand’s heritage.

The opening was tied back to Studio 54, which Schrager opened with Steve Rubell during the 1970s. Edition brought in legacy performers like Diana Ross and Nile Rodgers. According to Pundole, bringing these artists back “a few blocks away from Studio 54 to perform at Ian’s latest creation was a dream. It was very location-specific, with a kind of depth and context that fit into the cultural history of Ian Schrager.”

Sir Hotels, a boutique hotel collection headquartered in Amsterdam, also uses its openings to honor the culture where the hotel is located.

The creative process is cross-disciplinary. “It all starts with the internal brand, marketing and public relations setting the theme through brainstorms, mood boards and discussions.” explained Sir Hotels founder Liran Wizman.

For the three-day opening event for the Sir Victor in Barcelona in June, the team dreamed up parties, a VIP dinner at the hotel’s restaurant, and rides on the hotel’s boat. There were also relevant activations incorporating local artists, musicians and deejays. Local musicians play on the Sir Victor rooftop, with views of Casa Milà, during the hotel’s June opening.

Developing a guest list is a critical part of these events. “Curating the guest lists starts with the tastemakers and influencers in that city.There are people in art, film, fashion and music, theater, philanthropy – the people that we know will appreciate what we’re doing and spread the word. Then the party kids; we have the uptown socialites and the downtown designers. We put it all in a pot and stir it up and let the alchemy take care of everything else,” said Pundole.

More than 1,500 of Barcelona’s top athletes, artists, musicians and designers arrived at Sir Victor for its opening party. “It is always important for us to have a international crew alongside the most interesting people in the local community because – at the end of the day – this is what we aim for our hotel to have on a regular basis: A mix of locals and tourists all coming to enjoy,” said Wizman. Welcome to the Neighborhood

The Hoxton has an in-house team called 23Lab which creates a cultural city report before every opening. The team meets with locals and asks questions to gain insight into the cultural fabric of the city. Hotel brand managers will contact neighboring companies and brands, working with them to create opening programs.

Those consist of both “housewarming parties,” which are private events for the hotel’s neighbors. along with media and local partners, and public programming. This dual strategy helps build energy and foot traffic during the hotel’s early days.

The most recent party took place at the The Hoxton Southwark in London. There were pooch portraits, plant swaps, yoga brunches, full moon parties, crystal healing, and neighborhood runs.

“Our programming is all about partnerships, so it’s not about huge investment,” said Martina Luger, chief marketing officer of Ennismore, the parent company of The Hoxton.

“It’s about finding people with similar values to us who want to collaborate, and establishing those strong relationships so we can continue to build on and support one another. For us, it’s more important to feel rooted in the community and continue to build a basis of brand fans and future guests through word of mouth.”

Photo credit: The opening of The Edition Barcelona combined the brand's signature style with a distinctly Catalan crowd. Making a big splash is key for some hotel brands. Edition Hotels