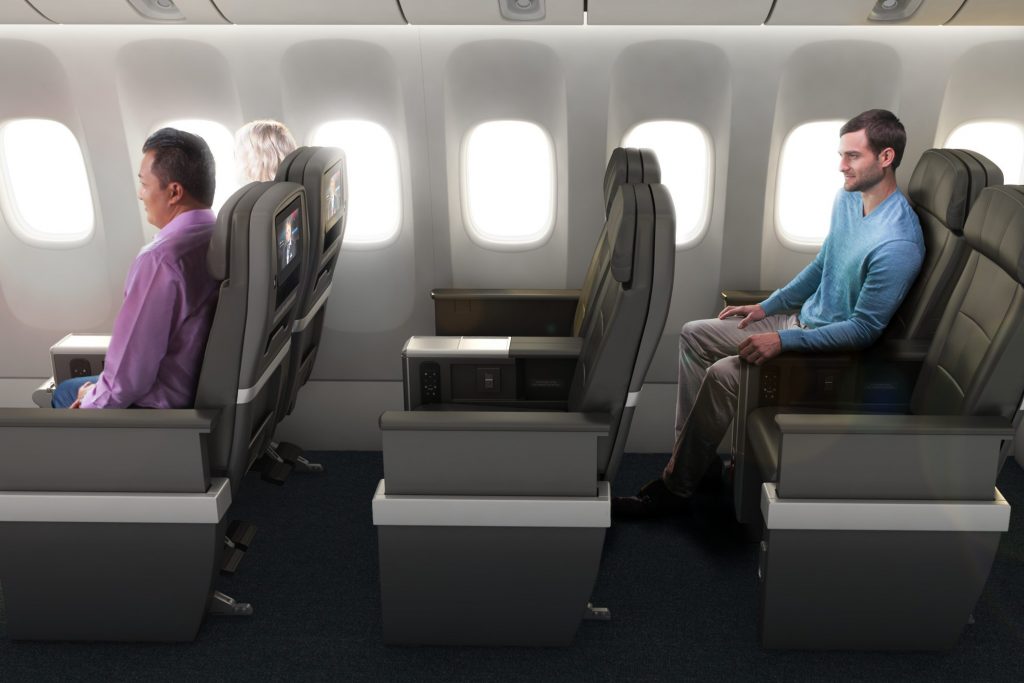 Skift Take
Delta Air Lines and United Airlines recently told investors they’re making big revenue from premium-seat upsells. Not surprisingly, American wants a piece of that action. But it has some IT work to do first.
— Brian Sumers
Share
Tweet
Share
Post
Send

American Airlines reported the best third-quarter revenues in its history on Thursday, at $11.6 billion, but executives admitted they still trail their two biggest competitors when it comes to wringing extra cash from each passenger.

For all three of the major global U.S. airlines, “Fuel prices have gone up about the same as a percentage of expense,” American CEO Doug Parker told analysts on the airline’s third quarter conference call. “So [if] the question [is], … why have your earnings fallen more, it is because our revenues haven’t gone up as much.”

Parker pledged to fix that gap Thursday, as American outlined plans to increase revenues by $1 billion next year, while reducing costs by $300 million.

Investors, who have been selling off the stock for much of this year, seemed to like it, pushing the price up more than $2.50 per share by 1:30 p.m. in New York. This occurred even after American reported third-quarter net profit of $341 million, a decline of 48 percent-year-over-year. Its pre-tax margin fell to 3.9 percent from 9.7 percent.

The airline plans to add a big chunk of revenue by improving its segmentation strategies, selling customers different products, including business class, premium economy and extra-legroom seats, depending on what they value.

It’s already selling the various cabins, but Parker said American will become more sophisticated about how it markets its premium seats and makes offers by next year. The strategies should help American recover more of its higher fuel bill, which rose more than $750 million in the third quarter, year-over-year, executives said.

American was the third major U.S. carrier to merge with a competitor, US Airways, and executives often remind investors they’ve been slower to make some investments than United and Delta because they’ve been handling integration-related issues.

With integration mostly complete, Parker said American can focus on priorities like digital improvements, so it can better match Delta, which often bombards customers with offers to buy-up to a more comfortable seat. That strategy has been profitable for Delta, and the airline’s executives said on their Oct. 11 earnings call that premium revenues are up 19 percent year-over-year.

“They are doing a better job than we can today of making sure this sell-up activity is available to the customers,” Parker said. “They have products that are there where people buying and they’re available in channels we don’t have it available, so we view it as upside.”

Don Casey, senior vice president for revenue management, said American is behind on technology, so it struggles to push offers to customers between when they buy tickets and when they fly. That should change next year, he said.

“That’s a big window where we can put some offers in front of our customers to increase to ancillary revenues,” he said. “That’s really an IT infrastructure question.”

Casey soon will have more premium seats to sell. Later this year, American will complete its project to its international-style premium economy seats to its Boeing 777s, and by next summer, it’ll have them on all 787s.

Most airlines report high margins from premium economy, because they can sell it for far more than coach — some airlines say the seats can produce 1.7 times as much revenue as economy seats — but the product doesn’t take up that much more room.

In addition, by next summer, American will be halfway through a project to add 12 seats to Boeing 737s. The regular economy class seat pitch is tight — some customers have complained — but retrofits will permit American to squeeze more revenue per aircraft.

American is tweaking where it flies, too.

American will barely grow next year, planning to add just 2 percent capacity, less than the 3 percent is had predicted earlier. Many extra flights will come at Dallas/Fort Worth, one of the airline’s best performing hubs, where American is adding 15 gates, allowing it to fly 100 additional daily departures.

Because American is so strong in Dallas/Fort Worth, flights tend to perform well almost immediately. That’s much different than in a competitive market like Los Angeles, where American has added a slew of long-haul flights in the past five years. Routes like Los Angeles to Beijing and Los Angeles to Sydney, which have intense competition, take much longer to succeed.

“We have routes in and out of Dallas that will immediately generate higher than average profitability versus the marginal profitability that airline growth usually generates,” Parker said.

American executives are hopeful the network changes, along with revenue improvements, will help them improve unit revenues, both later this year and next. The airline’s total revenue per available seat mile, or TRASM, increased 2.6 percent, year-over-year in the third quarter.”