Skift Take
Consumer sentiment towards the majority of hotel loyalty programs has been improving over the past five years and the breadth of programs is also growing, but the path to real customer loyalty isn’t that simple.
— Rebecca Stone
Share
Tweet
Share
Post
Send

The road to real customer loyalty is not a straightforward path. Today, there are completely contradictory data points as well as ongoing debates regarding the overall success of loyalty programs, the value they create, and their ability to drive true loyalty.

Here, we offer two analyses evaluating the success of hotel loyalty programs. The first ranks the programs according to seven quantitative metrics, while the other takes a look at consumer sentiment according to commentary posted on various online platforms. Both analyses rank Marriott as the most successful loyalty program currently, but, after that, differences arise, suggesting there is definitely room for improvement among all of the programs.

From the hotel brand perspective section:

The seven metrics we included in our Loyalty Brand Matrix are as follows:

Based on the average of each individual rank, we found the brand that ranks the highest across all seven metrics is Marriott, followed closely by Hilton, IHG, AccorHotels, Choice, and then Hyatt and Wyndham. 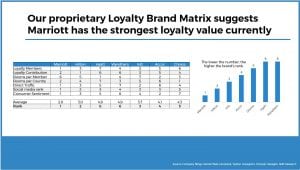 From the consumer perspective section:

Skift Research worked with Crimson Hexagon, an AI-powered consumer insights company, to perform an analysis of online consumer sentiment towards these loyalty programs. We assessed consumer sentiment for eight hotel loyalty programs (Starwood was separated out as it has not been joined fully with Marriott) during the time period of January 1, 2013, to December 31, 2017. The sites or programs monitored included Twitter, Facebook, QQ, Reddit, Blogs, Comments, Forums, Tumblr, and Instagram, and the search was performed so that the commentary had to include terms such as “loyalty” or “loyalty program.”

Based on this analysis, we found that Marriott’s loyalty program has had the most positive consumer sentiment on average over the past five years, while Choice had the lowest. The majority of hotel companies’ loyalty program sentiment has been improving over the past five years, particularly for Hyatt and Accor. This is perhaps due to some of the enhancements all of the companies have been making. Given our view that consumers tend to post publicly when they have strong opinions (either negative or positive), this trend appears to indicate people’s view of loyalty programs is, in general, improving.

Finally, we also include one quote from an online source as an example of what an individual consumer said online about the corresponding hotel brand’s loyalty program in 2017. If positive sentiment was trending up, we included a positive quote. If positive sentiment was trending down, we included a negative quote to help readers better understand what individual consumers were saying about the corresponding program. Performing various analyses can be very helpful in assessing how successful loyalty programs. However, in our view, real customer loyalty occurs when brands establish such strong relationships with consumers that consumers choose that brand over others and refer it to friends and family. In order to do this, hotel brands must drive deeper emotional connections via a strong branding strategy, better utilization of online review sites, improvements in technology, better usage of data, and stronger personalization. At the same time, relations with owners need to be continually improved so that they recognize the full financial benefit of being affiliated with your brand. Finally, hotel brands should look outside the industry for emulation on winning loyal customers.