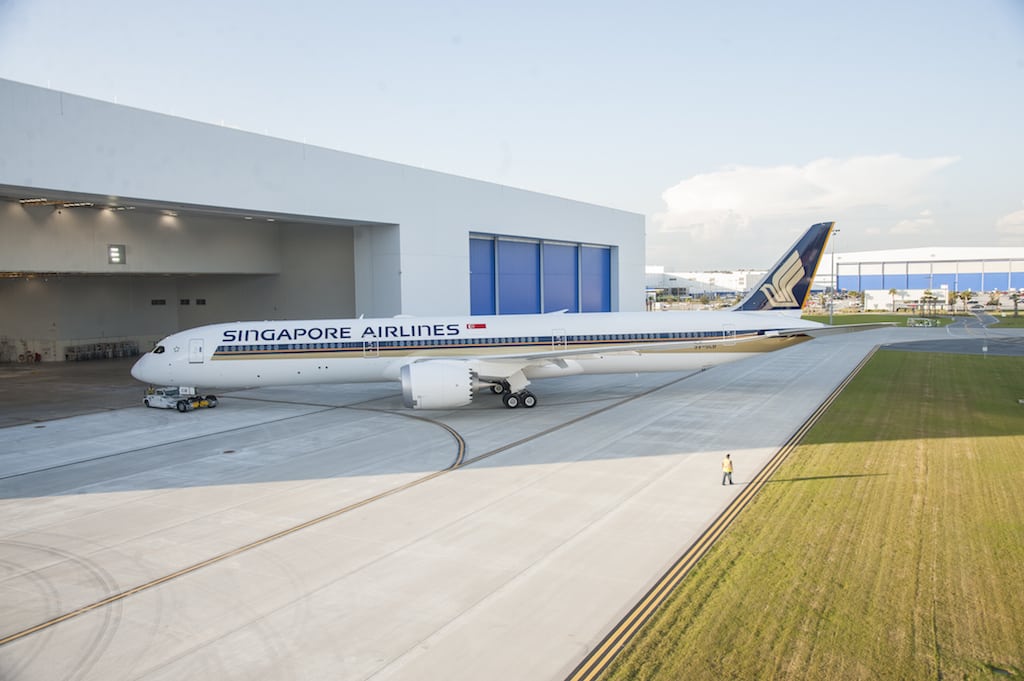 If you were following airline enthusiasts’ Twitter or Instagram accounts this week, you may have noticed snazzy photographs of Singapore Airlines’ first Boeing 787-10, a new airplane that soon will fly regularly from Singapore to Osaka, Japan, among Asia’s longest routes.

You have to credit Singapore Airlines and Boeing for turning the delivery into a marketing opportunity, showcasing new passenger cabins and technology in publications as varied as The Points Guy and Conde Nast Traveler. “I think this might be my favorite Singapore Air business seat,” Zach Honig of The Points Guy tweeted.

Let’s not get carried away.

The 787-10 is a cost-effective aircraft for airlines, and it could help them turn otherwise marginal routes into money makers, and perhaps let them add new ones. But travelers shouldn’t expect too much from this updated 787 because it won’t be the flagship of any carrier’s fleet. Passengers probably won’t find amenities like onboard bars, and they might not even see first class, even on airlines that otherwise have it.

That’s because while the 787-8 and 787-9 opened new frontiers in aviation, airlines expect to use the 787-10 as a more traditional people-mover. It’s an airplane that can transport more than 300 passengers on medium-length routes at a relatively low cost.

Here’s some context on the new plane.

How is this aircraft different than other Dreamliners?

Boeing’s first two 787 models, the 787-8 and 787-9, were true advances for aviation, allowing airlines to open new routes that had not been commercially viable.

In some cases, as with United’s San Francisco to Chengdu, China route, other airplanes had the range to fly the distance, but not with acceptable economics. For others, like Qantas’ new Perth to London route, previous airplanes couldn’t manage the distance — at least in a profitable way.

Today, Boeing 787-9s fly some of the world’s longest routes, including San Francisco and Los Angeles to Singapore, and Houston to Sydney, all on United.

But travelers probably won’t see such sexy routes from the 787-10.

Though it shares the same technology with the other Dreamliner models, and passengers should love the aircraft’s air quality and its big windows, Boeing built it for a different purposes. At least for now, it’s more of a regional airliner.

Is it a popular plane?

Through February, Boeing said it had booked 171 confirmed orders for the 787-10,
with 49 headed to Singapore. Other major customers include Etihad Airways (30), Eva Air (18), United Airlines (14) and British Airways (12). Emirates said last year it would take 40 of the jets, but it has not yet finalized the deal.

By comparison, airlines have committed to 418 of the Boeing 787-8, and 705 of the 787-9. Going forward, the 787-9 is expected to be the big seller because it combines long-range flying with a relatively high seat count. Almost every airline now prefers the 787-9 over the first-generation 787-8, because it has better economics on a per-seat basis.

While sales for the 787-10 have been relatively slow, Boeing is betting Singapore’s experience will spur new orders.

“The 787-10, which will account for more than a third of [Singapore’s] fleet in 2023, could be a game changer,” CAPA-Centre for Aviation said in a report last month. “Boeing is hoping that several other airlines follow SIA in making the 787-10 a major component of their future fleets.”

Where will it fly?

At least short term, this is probably an airplane for Asia.

Singapore has said it plans to use its larger Dreamliners on routes within Asia and to Australia. Unlike U.S. and European airlines, which often prefer smaller Boeing 737 and Airbus A320 jets, Asian airlines like flying widebody aircraft on medium-length routes of four to eight hours because they can carry extra people and cargo.

“For the most part it’s an eight- or nine-hour airplane, somewhere in there, depending on the load,” said Richard Aboulafia vice president for analysis at Teal Group said of the new Dreamliner model. “The -9 really is the range machine. The -10 is capacity and some of the best seat mile costs in the long-haul business.”

In its report, CAPA-Centre for Aviation noted the 787-10 is an effective replacement for Airbus A330 now operating many regional Asian routes. CAPA noted the newest Dreamliner has 56 more seats than the A330-300 on average, but burns less fuel.

With the better economics, CAPA said Singapore should be better able to compete in the regional market against both full-service carriers and low-cost-carriers.

Still, eventually the aircraft should fly nearly everywhere, including transatlantic and shorter transpacific routes. Today, many airlines are using Dreamliners on routes that don’t need its ultra-long range, such as United’s late-night flight from Washington Dulles to London Heathrow, and even United’s Los Angeles-London route.

With the 787-10, more shorter routes could switch to the Dreamliners in the future, which should be good for passengers.

“It’s not going to get the headlines of world’s longest routes like the -9, but it will let people get where they are going with few connections and great costs for airlines,” Aboulafia said.

But the delivery was big news. Is there something else notable?

Singapore’s first Boeing 787-10 is the first major commericial airplane Boeing delivered from somewhere other than its Washington State base. This plane is built in North Charleston, South Carolina at the manufacturer’s new facility.

Almost everyone was all smiles this week, but there was significant consternation in 2009, when Boeing decided expand to South Carolina. The state is, not coincidentally, is a right-to-work state, where it’s much harder to build strong labor unions.

Boeing opened the South Carolina site after talks with its Washington-based unions broke down. Boeing, burned by an eight-week 2008 strike, sought a 10-year deal with the International Association of Machinists and Aerospace Workers that would ensure employees would not strike.

Despite the difficult climate, unions have tried to organize workers in North Charleston. However, they have not had much success. Last year, 74 percent of workers rejected a chance to join the International Association of Machinists and Aerospace Workers, according to the New York Times.