For the last couple of years, the big trends in travel and tech have been slowly making their presence felt in the meetings and events industry.

This year, we’re going to see trends such as co-living and co-working spaces impacting the sector more. At CES 2017 in Las Vegas last month, Zappos launched a pop-up co-working space at the Sands Convention Center, which was packed the entire show. Read our post this week on the growth of co-everything.

Virtual reality is another megatrend disrupting events. Freeman launched a series of new VR products and services last month, but the value of immersive 3D video is not just the experience. There’s growing evidence that VR is also driving conversion rates at a significantly higher level than other digital content. Read the full story here. 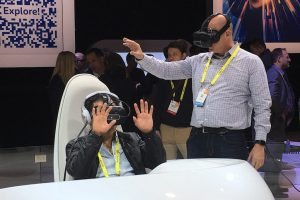 Travel Brands and Meeting Planners Are Using Virtual Reality to Drive Conversion: Virtual reality is finally going mainstream in 2017. Travel brands and event planners are leveraging that demand to engage their audiences in more impactful ways, which is proving to drive higher conversion rates. Read more at Skift

Remote Workers Turn to Co-Living Spaces for Next-Gen Meeting Venues: The work-from-anywhere force is on the rise, but face-to-face time with co-workers remains vital. For their internal gatherings, some remote teams have found co-living spaces can offer a better environment for bonding than traditional meeting venues. Read more at Skift

More Companies Are Allowing Travelers to Use Sharing Economy Services: Now that half of corporate travel policies allow ride-sharing services, at least according to this survey, we have to wonder: What is the holdup with the other half? And will alternative accommodations eventually make similar inroads? Read more at Skift

North Carolina’s ‘Bathroom Bill’ May Cost The State More Event Revenue, Again: North Carolina is a microcosm of the country. On one hand, you have all of this high-tech brilliance in places like the Research Triangle outside Raleigh. Then you also have a surprisingly large number of people who see the world like a child. It’s a shame because House Bill 2 is continuing to push away big money events across the state. Read more at Skift

Dubai’s Airport to Expand Thanks to a $3 Billion Loan: Dubai already has the world’s busiest airport by international passenger volume. Now it’s building a second international airport south of the city at a cost of about $30 billion, overshadowing rival gateway cities like London that can’t even decide about opening an additional runway. Read more at Skift

To Foster Innovation, Connect Coworkers Who Share Aspirations: There are three types of identities we all have as human beings: Identities of our origin, our life history, and our aspirations. According to this post: “These three sources of identity shape the communities we join and create. Communities of aspiration are especially powerful. When people who share the same ambitious goals come together, they can move mountains.” Read more at Harvard Business Review

How 360 Degree Live Video is Paving the Way for Virtual Reality at Events: While virtual reality is getting all of the buzz, 360-degree video is often overshadowed as a next generation tool in an event planner’s toolbox. Here’s why 360 video is a gateway drug to full VR, which is still a few years away for many event pros. Read more at Event Manager Blog

Lady Gaga’s Halftime Show Drones Have a Bright Future: Everyone’s talking about the 300 Intel “Shooting Star” drones flying in choreographed unison over Lady Gaga during the Super Bowl halftime show, at least on TV. (The drone scene was actually shot a week before and dubbed into the telecast.) However, expect to see more of Intel’s drones at live events in the future. Read more at Adweek

The Skift Meetings Innovation Report is curated by Skift Editor Greg Oates [go@skift.com]. The newsletter is emailed every Wednesday.