Skift Take
Just because your company is paranoid doesn’t mean Google Flights is not out to get you. Google Flights is making gains, albeit incrementally and seemingly unceasingly.
— Dennis Schaal
Share
Tweet
Share
Post
Send

With a dominant search engine in its pocket and a fast-as-anything and excellent product, Google Flights is starting to really assert itself and is getting consumer traction.

With travel advertising revenue that’s already twice the size of Expedia’s, Google, of course, won’t share any market share or revenue data about Google Flights or Hotel Ads. There are many reasons for Google’s reticence, including that this is just Google being Google and the fact that the company doesn’t want to alienate its largest online travel agency advertisers.

But in a LinkedIn post, Mario Gavira, managing director of Paris-based metasearch site Liligo.com, crunched data from Google Trends and stated that Google’s gains are contributing to likely consolidation fervor in Europe.

“The reason for this sudden rush might well be spurred by the increased interest of search giant Google in expanding its presence in the existing online travel ecosystem,” Gavira wrote. Ctrip’s acquisition of flight metasearcher Skyscanner is a big contributing factor as well, he says.

We looked at similar Google Trends data as reflected in the two charts below. The first chart compares Google Web searches related to travel in the U.S. from 2004 to the present for search terms “Google flights,” “Kayak,” “Skyscanner” and “Momondo.” 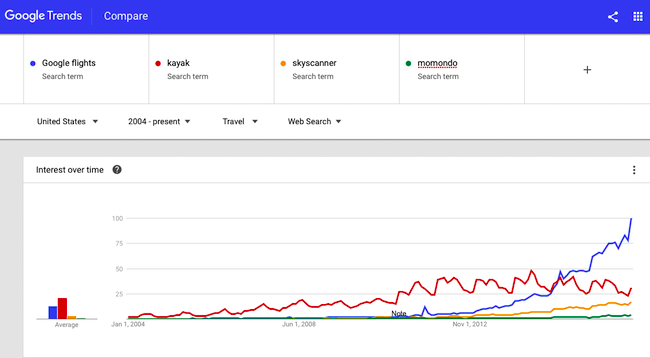 You can see that Google Flights has been the leader among the four metasearch offerings in terms of consumer interest, as expressed through Google Web searches, since March 2015, and that Google’s lead really accelerated in January 2017, when it rose dramatically.

In fact, while searches for Google Flights jumped 22 points in January 2017 versus December 2016, the three other competitors saw searches for their sites rise for a combined total of only 12 points.

Let’s be clear: Google Trends data does not translate into market share — but it is an indicator, however flawed, and perhaps the best one that is publicly available. [See note about Google Trends and market share below.] Sites that measure website traffic can’t measure Google Flights’ visitors because it is a subdirectory and the comparison-shopping feature is built right into Google search, as well.

Google Flights’ gains in terms of consumer traction might therefore be even more dramatic than Google Trends indicates. That’s because the Google Flights widget appears in Google search without a consumer specifically searching for it. If you search for “flights from Newark to LAX,” for example, then Google Flights could well be the first sponsored result. So consumers see it and can use it without searching for it.

We’ve documented how Google Flights got more aggressive starting in 2015 in that consumer searches for branded airline terms such as “United flights to Chicago” trigger the appearance of Google Flights in Google search with United flights and  fares already baked in. It works like that for most searches with the exception of American and Southwest airlines, for example, which aren’t playing this game with Google.

While the gains of Google Flights in search have been dramatic in the United States — the product’s initial launch market several years ago — they have been less pronounced globally. The chart above, which traces Google Trends data globally, depicts Skyscanner as the clear leader over Google Flights in January 2017 (100 points versus 46) and, two months after Ctrip bought it the gap was widening. For example, Google users’ search interest in Skyscanner rose 28 points in January 2017 versus December 2016 while interest in Google Flights’ increased 11 points.

Again, these numbers are not equivalent to market share gains but they do show consumer interest as captured in Google search.

“These Google Trends charts offer an interesting insight into our competitive marketplace,” says Hugo Burge, CEO of UK-headquartered Momondo Group. “Google has strong momentum now with its own products in Flights and hotels, in Europe as well as in the original launch market of the USA.”

Kayak co-founder and CEO Steve Hafner concurs that Google is getting more aggressive these days with its flights product, adding that hotels is where the real money is.

Hafner argues that Google Flights is making larger gains in the United States than globally because it has better airline relationships in the U.S. through its 2011 acquisition of ITA Software and that the product in other parts of the world is subpar in terms of comprehensiveness, availability and accuracy.

“Certainly, we have always seen Google – after the purchase of ITA – as having its best product in the USA, which might explain its faster growth there,” says Burge of Momondo. “However, Google been playing catch-up with its product rollout in the rest of the world and now has made significant gains in Europe with strong ongoing momentum.”

If Google is playing the long game — and it obviously is — then it has the tools to be a competitive threat to all of its frenemies, namely advertisers and competitors.

“Google should be seen as one of the key global players within online travel – it has the advantage of global reach, an unparalleled traffic base and access to enormous amounts of data,” Burge says.

Meanwhile, Skyscanner seems to be making gains in its core European markets, as well as in Asia, where it now has China’s Ctrip as a benefactor. Heavily dependent on its flights business, though, making strides in the hotel sector is another matter for Skyscanner.

“Skyscanner have done well in many markets on a global scale in the flights sector, especially with its expansion into Asia,” Burge says. “I take my hat off to them. One area I think they have struggled is in diversifying into hotels, perhaps due to the brand as much as the technology.”

With Google Flights making gains and further consolidation in the offing — we pointed to talks between Kayak and Momondo, for example — it is clear that the big players will be making moves to accelerate growth and try to position themselves for the future.

For example, as shown in the two charts below, Toyota had a commanding lead over Ford Motor Co. in search interest (37 points to four points) in December 2016, according to Google Trends. However, Statista found that their U.S. market share that month was roughly equal at around 14 percent.

The point is that Google Flights’ gains in search interest, as captured in Google Trends, doesn’t necessarily mean it took a corresponding amount of market share.