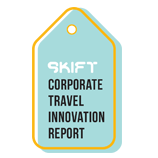 Who says August is supposed to be a slow news month? American Express Global Business Travel filled its vacancy at chief executive with Doug Anderson, formerly president and CEO of Carlson Wagonlit Travel since 2008.

As unexpected as Anderson’s departure in April from CWT seemed at the time, this move is even more unexpected, according to sources.

We also examined the effects that Brexit fallout could have on corporate travel in the UK, which could be good news for low-cost carriers and a headache for Europe’s largest airlines.

Finally, we looked into what corporate travel management companies are up to on social media. It’s a bit of a mess, frankly, but companies like Egencia are looking to use lessons learned in the leisure space on the B2B side.

Plus: Is Marriott International’s acquisition of Starwood Hotels & Resorts potentially on the rocks? You’ll have to read to find out.

that business travel life. my coworkers would murder me if i made them wait 30 min for my bag. — @rmontonio Marriott and Starwood Say Their Deal Is Taking Longer Than They Hoped: Recent reports alleging that Marriott has “buyer’s remorse” about the deal, while scintillating, don’t seem very logical when you think of all the effort both Marriott and Starwood have put into making this deal a reality. Read more at Skift

Will Low-Cost Airlines Benefit From a Brexit-Induced Corporate Travel Slowdown?: If the UK economy moves into recession, companies will look to slash their corporate travel budget. Full service carriers like British Airways are likely to take the bigger hit, which could benefit low-cost airlines like easyJet. Read more at Skift

American Airlines Quietly Experiments With Disrupting Its Award Ticket Pricing: It’s becoming clear that airlines are not done with their loyalty experimentation. Read more at Skift

Tourism Stakeholders Are Staying Calm as Zika Spreads in Florida: For now, things are stable for hotels and cruise lines in South Florida. If the Zika virus continues to spread during the period leading up to the winter, which is the area’s peak tourism period, this may quickly change. Read more at Skift

Interview: Airbnb’s China Rival Tujia and the Power of Home-Field Advantage: Given what happened with Didi Chunxing and Uber, can other businesses like Airbnb compete in China? What can vacation rental and homesharing companies learn from homegrown Chinese startups like Tujia? Read more at Skift

Can TripAdvisor Turn Things Around? The Debate Rages: Can TripAdvisor, with all its content and global reach, become another Booking.com-like success story or will TripAdvisor’s prospects fade? There are plenty of possibilities within that range, too, but much depends on TripAdvisor’s transition into a booking plus metasearch site. That’s the $9 billion question — and there’s a wide range of opinion on the outcome. Read more at Skift

Travel Management Firms Struggle to Find a Voice on Social Media: What happens when your social media operations have to transcend the traditional silos of B2B and B2C? Travel management companies are figuring it out in a very public forum. Read more at Skift

HotelTonight Becomes Profitable but IPO Chances Are Remote: HotelTonight is more likely to get acquired than to do a successful IPO given the company’s relatively small size. The app is exquisite but competition by bigger players is intense. Read more at Skift