2015 Was a Record Year for Travel Tech Funding

There's Airbnb, and then there is everyone else.

2015 saw an all-time funding high to travel tech, buoyed by big deals like the $1.5B Series E to Airbnb and the $300M Series E to China-based TuJia. Deal count also surged.

CB Insights dug into the data surrounding travel tech investment trends, including deals and dollars breakdowns, most well-funded companies, and most active investors.

Financing activity to travel tech startups exploded in 2015. Funding reached more than $5.2B across 348 deals through 12/21/15, and is projected to reach almost $5.4B across an estimated 360 deals by year-end.

Dollars invested also saw a large jump, with 2015 funding year-to-date growing 125% over the 2014 year-end total. Notable financings in the year include the $1.5B Series E round to Airbnb and the $300M Series D round to TuJia Online Information Technology, which is a China-based vacation rental platform. 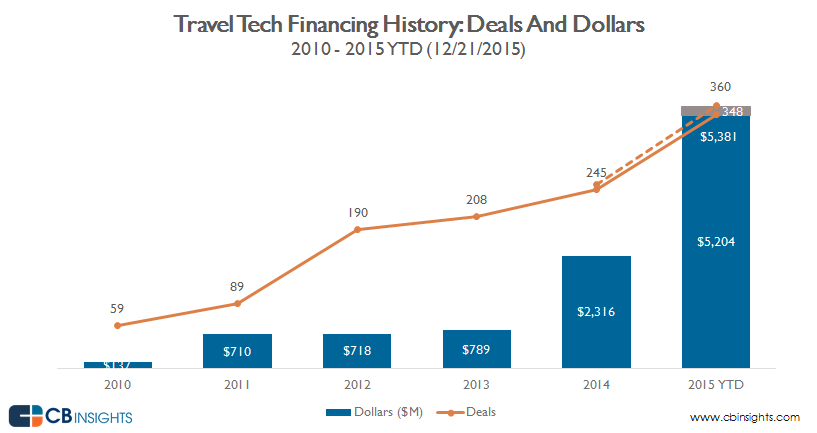 The higher deal volume is brought into sharper focus when looking at this year’s quarterly trends compared to last year’s. Each of the last 3 quarters saw 85+ deals completed, compared to a 55 to 68 quarterly deal range in 2014. 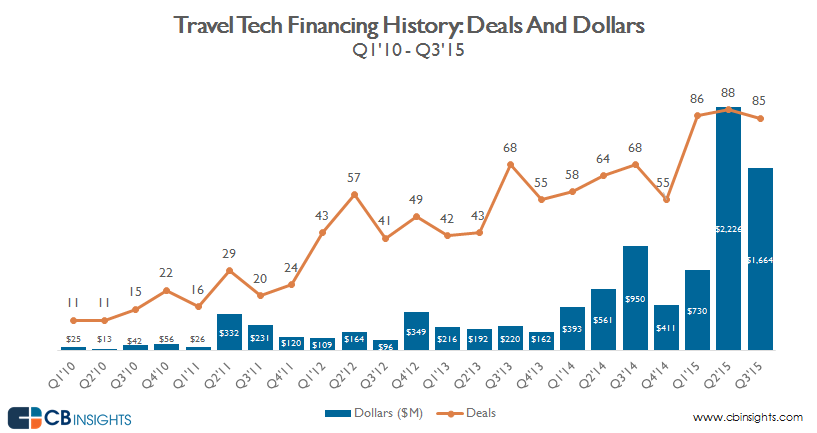 The Seed/Angel stage dominated deal activity, accounting for more than half of all deals completed since 2010. Overall, early-stage rounds (Seed/Angel and Series A) took 71% of deal share to travel tech startups. 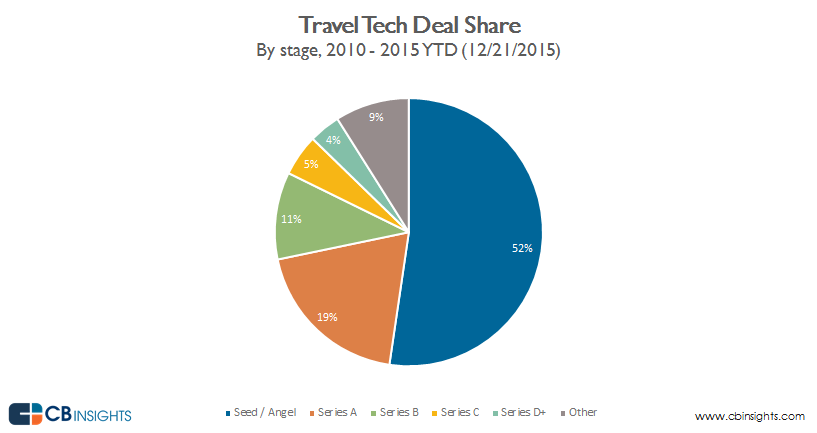 When looking at dollar stage, the picture flips. Late-stage (Series D+) investments have commanded the plurality of dollar funding to travel tech companies since 2010, accounting for 35% of dollar share.

Mid-stage dollar share also saw significant investment and accounts for 31% of all funding. Finally, early-stage (Seed/Angel and Series A) dollar share attracted 16% dollar share, despite attracting over two-thirds of deals, as seen above. 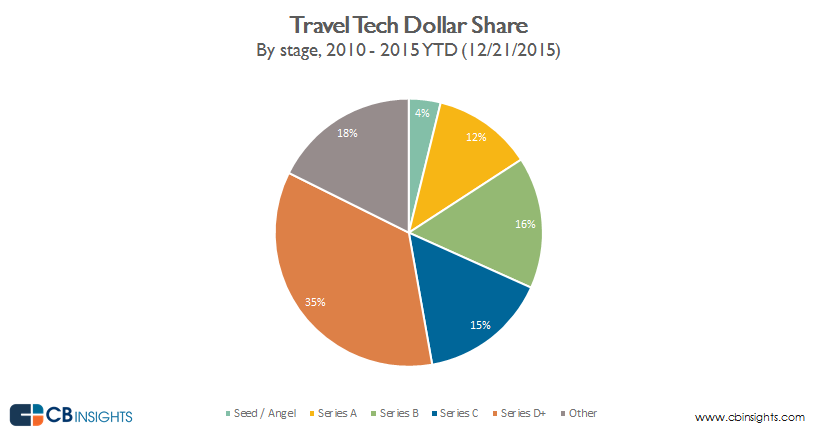 500 Startups tops our list as the most active investor in travel tech startups by the number of unique portfolio companies in the space. Some of their investments include travel-centric social network Tripoto and ground transport search engine Wanderu, among others. The following two most active investors are Accel Partners and SV Angel, as seen below.

500 Startups was also the most active early-stage investor in travel tech startups. Rounding out our top 3 spots are SV Angel and Plug and Play Ventures.

This story is reprinted with the permission of CB Insights, where this story originally appeared.

Photo credit: This guy, on the left, made out big. Airbnb led travel companies in funding. The Late Show With Stephen Colbert / CBS