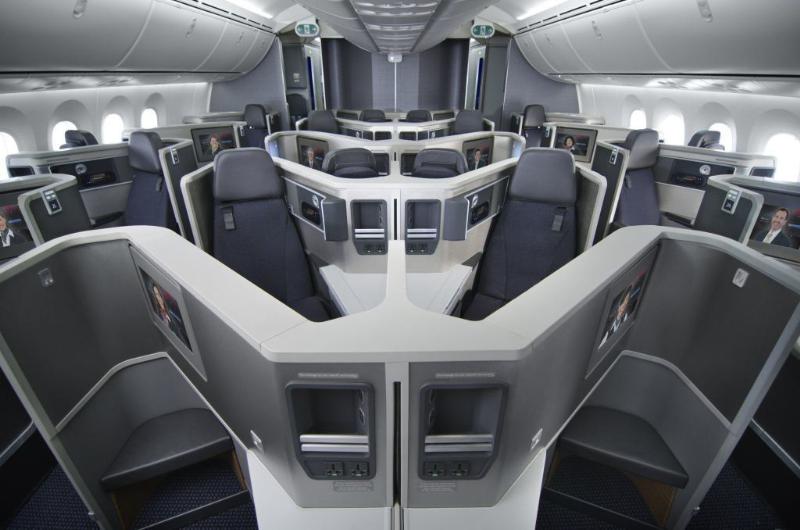 Despite its past battery problems, the Dreamliner is a state-of-the-art aircraft which provides passengers a unique ride, good enough to inspire its main competitor. While focusing on revenue optimisation of these cabins, American Airlines makes the most of the Dreamliner's advantages with added passenger experience enhancements throughout. American Airlines has revealed the interiors of its new 787-8 Dreamliner, destined for international service between Dallas-Fort Worth and Beijing Capital International Airport beginning on June 2.

The seat structures are the same model the airline has featured in its Hotel-in-the-Sky concept 777-200 aircraft, and introduce a number of new passenger comfort features, including: Panasonic In-Flight Entertainment system with a 15.4-inch HD touchscreen, acoustic noise canceling headphones, universal AC power outlets and a USB jack, and an individual suite ID panel allowing the airlines’ guests to request privacy by lighting up a “Do Not Disturb” sign.

American’s Main Cabin Extra class will offer passengers six inches of additional legroom, compared to standard Economy seats. Both the 48 Main Cabin Extra and the 150 Main Cabin seats will be arranged in a 3-3-3 configuration. Each seat will feature a 9-inch HD Panasonic touchscreen monitor, universal AC power outlets and a USB jack.

Trimmed with elements that respect American’s traditional silver and blue color scheme, the design strikes an ideal balance between form and function.

The Boeing Dreamliner has a number of passenger experience features which to make air travel more pleasant overall, including an optimized cabin design which enhances a sense of space, large windows which let in plenty of natural light and are dimmable at the touch of a button, improved cabin humidity for well-being and advanced noise dampening for improved sound quality. American’s 787-8s will also feature a walk-up bar for passengers in the premium cabin, stocked with snacks and refreshments.

“Adding the 787 Dreamliner to our network gives us the opportunity to increase our efficiency on long-haul flights across the globe and potentially open up new markets in our network. It’s a big win for customers and just the latest example of how American is going for great,” says Andrew Nocella, American’s chief marketing officer.

American is carrying out a program of planned cabin improvements– an investment of more than more than $2 billion–which includes installing fully lie-flat seats on international long-haul aircraft, international Wi-Fi, more in-flight entertainment options and power outlets. This program includes a retrofit of American’s entire fleet of Boeing 777-200s, selected 767-300s, 757-200s and Airbus A319s for domestic and international routes. The airline is also modernizing its Admirals Club lounges around the world and improving its food and beverage offerings.

The airline’s ongoing fleet enhancements include taking delivery of hundreds of new planes, with firm orders for 42 Boeing of the 787 Deamliner aircraft and the right to acquire an additional 58.

This new 787 Dreamliner will also serve flights between Dallas and Ministro Pistarini International Airport (EZE) in Buenos Aires beginning June 4. American will later deploy the 787 to additional markets in 2015, as it takes delivery of new aircraft. Bookings for 787 flights will be available starting Saturday, Feb. 14.