Qunar CEO Interview: We Can Out-Execute Alibaba and Everyone Else 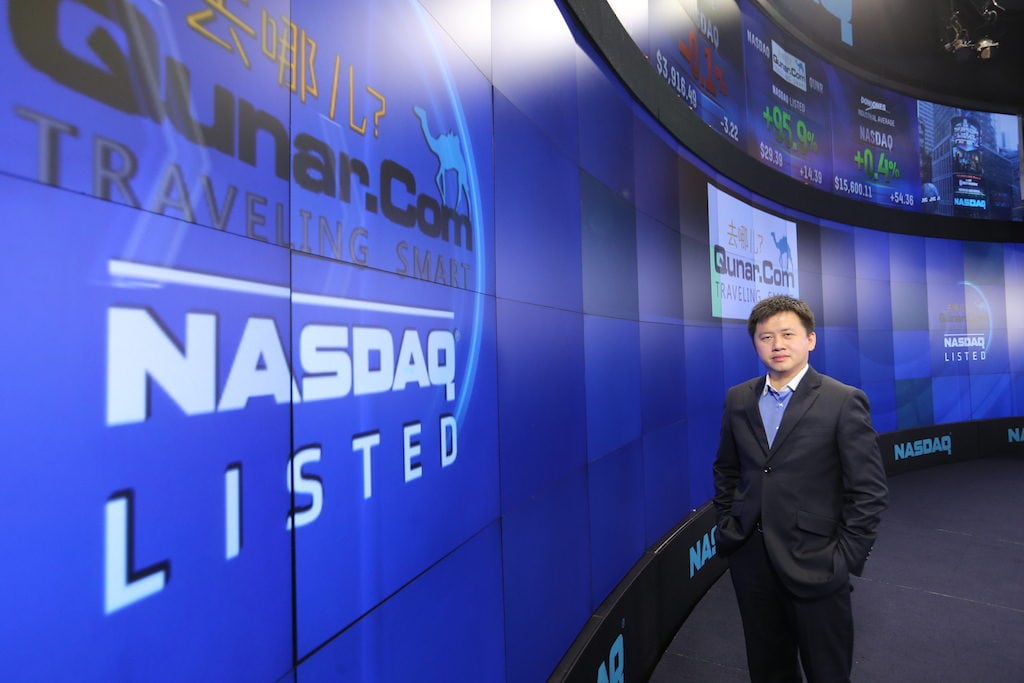 Skift Take
It’s all about the numbers and execution so we’ll be able to view Qunar’s quarterly reports over the next few years to see if CEO Chenchao “CC” Zhuang can make good on his boast that the company will out-execute Ctrip, Alibaba and everyone else. Let’s see if all the confidence adds up.
— Dennis Schaal
Share
Tweet
Share
Post
Send

If you take Qunar co-founder and CEO Chenchao “CC” Zhuang at his word, he’s not losing any sleep about Alibaba’s war chest, Ctrip’s enhanced partnership with the Priceline Group or Expedia Inc. getting aggressive about investing in China’s eLong.

In his assessment of the ultra-competitive Chinese travel landscape, CC Zhang says he doesn’t pay attention to Alibaba and isn’t impressed with Expedia Inc. pouring money into eLong.

It’s all about efficiencies and the growth-rate numbers, and the Qunar CEO argues that the company, which is controlled by Chinese search engine Baidu, has a distinct advantage over its peers.

“We can out-execute everybody in the market,” CC Zhuang says. “I don’t even pay any attention to that [Alibaba]. We have proved it.”

Skift caught up with Qunar’s “CC” Zhuang, and chief strategy officer Yilu Zhao, at the PhoCusWright conference in Los Angeles and discussed the competitive environment, shifting partnerships and the company’s strategy. An edited version of the interview follows:

Skift: The stock price of Qunar and some of your competitors fell in the weeks after the Alibaba IPO. Alibaba invested $457 million in hotel tech company Beijing Shiji Information as one of its first moves after the IPO. They have a lot of money to throw around. Alibaba just rebranded its travel offering as Alipay. What does it all mean for you guys?

Chenchao “CC” Zhuang: It doesn’t mean anything because Alibaba launched its travel service about nine years ago, which was one year after us. When we started our business we only have $20,000 in our pockets. At that time, Alibaba already was a $4 to $5 billion company. I think the gap has widened and over 10 years we have proven that nobody can out-execute us. We can out-execute everybody in the market. I don’t even pay any attention to that [Alibaba]. We have proved it.

Skift: Where is the proof? I’m sure if I talk to Ctrip or maybe Long they would say, well, they’re out executing you.

“CC” Zhuang: Mathematics. Because if you look at the numbers, it shows our growth rate is much higher, so how can they out-execute me?

Yilu Zhao, Qunar chief strategy officer:  The gross booking volume for us today, is about 75% of Ctrip’s. The gap is closing and has closed very, very rapidly. Our growth rate is still the highest. If you look at it for them it is flat. We overtook Ctrip for the number one spot in the third quarter of last year.

Skift: eLong is behind Ctrip and Qunar. They say they’re investing very aggressively for the long term so what does that mean for you?

Skift: With Alibaba, though, you said they launched nine years ago. They have enough money to buy a big player. There were rumors that they were going to buy Expedia, for example, so do you still don’t expect them to really focus on travel in a big way?

“CC” Zhuang: Ten years ago Amazon had the money to buy 10 Alibabas. I think Alibaba is a little bit bigger than Amazon right now. Money doesn’t mean anything.

Skift: I already know you are going to tell me the same thing about the Priceline Group’s partnership with Ctrip. Priceline is investing in Ctrip so you don’t feel like that’s going to have a large impact on your business?

“CC” Zhuang: I don’t think the world will change by money and stretching your partnership. They do have a straight partnership, but at the end of day, it has to convert into results, and the results will appear in their quarterly results. Does the volume really grow? Does the revenue really grow the market share of both?

Skift: What do you think it is that you’re doing so differently that enables you to execute better?

“CC” Zhuang:  I think we look at the travel business in terms of efficiency. We try to squeeze out every single dollar. We try to automate everything and then provide a fully automated service experience for the consumers. Because of that our waste is very low, and all the value goes to either consumers or travel service providers. That’s our approach.

“CC” Zhuang: I think if anybody in the world can build something, we can build it too. In the battle, we are pretty large. I’m not sure we’re number one, but at least we have a very strong presence and we see our power growing very rapid, as well.

Skift:  Right. You said that 50% of your bookings in hotels now are on mobile?

“CC” Zhuang: No, more than that. I said most of our businesses have over 50% booking on mobile. Actually for hotels we are more than 50%.

Skift: Okay. In China, the smartphone would be the dominant device that people use to book their travel. Is that right?

Skift: In the U.S. travel companies are always talking about how a lot of hotel bookings on mobile are last minute, or same day, and people are booking stays that are shorter than they would on desktop.

Skift: Is that a challenge for you if people are only booking one or two days at a time instead of booking longer stays? Is that an issue that you have to deal with because you’re so mobile?

“CC” Zhuang:  Well, it definitely creates some new challenges for us. We have to change our system. But we are always changing so it’s not particularly difficult for us because we are changing anyway. We’re a very adaptive company.

Skift: How did you get that way? Is it the company culture?

“CC” Zhuang: I think it’s the culture, number one. Number two, when we entered the market, the market already had a lot of companies. It was entrenched with players. When we got into the market, Alibaba had already $4 billion to $5 billion business. Ctrip was already public. They were probably at that time already a $1 billion or $2 billion dollar company. eLong was already a public company All of them had a huge amount of cash, a large army, and how can we win the market?

Skift: There was a traveler, President Obama, who went to China in the last few days and there’s a new agreement on visas. How is that going to impact your business?

“CC” Zhuang:  It certainly will have a huge boost on the travelers to the U.S. I think more and more countries will follow the same approach. It will be a boost for the Chinese industry travel, as well.

Skift: Has the situation in Hong Kong adversely impacted your business?

Skift: What’s been new and exciting in the last few months? Any major developments or trends that you’re seeing about the business that are interesting?

Chenchao “CC” Zhuang: Well, I think, first of all our volume is still growing very rapidly, and being a very strong growth momentum. In certain cases, too, actually accelerating. Second of all, the mobile transition is huge and many parts of our business are already over 50% mobile.

CC Zhuang: Bookings. Many of them are over 50. Yeah. Mobile is our primary driver for business. Second of all our user base is very rapidly expanding to the third tier cities and the fourth tier cities in China. We’re talking about smaller cities that have half a million population, and they’re still getting more and more used to mobile applications. This shows our user base has a very strong momentum, and over time more of these users will not only buy hotels, they will do cross-purchase and buy other travel products. This is all very exciting.

I think the last time we spoke we mentioned we are doing unit management and pricing strategy for the airlines. At that time it was very small airlines. Now actually more and more airlines want us to do their pricing strategy. We have middle-sized airlines interested to in adopting our pricing system. We are making very great progress on that front.

On the hotel side, we are providing a property management system for hotel partners. Our strategy is to get a very large user base and market share. We provide a free system to travel service providers. So far the strategy has escalated really well so I think things is are in very good shape actually.

Skift: What else is going on that’s exciting? Anything new that you’re working on?

“CC” Zhuang:  I think what’s really exciting us over the last 10 years and what continues to excite us is probably that this industry is so fit for mobile and Internet technology because everything’s virtual. If you look at this large industry in many ways it’s still very fragmented and not highly efficient. There is a lot of waste in the ecosystem. As a developer, I always feel that there’s such an inefficient environment. This is what makes a programmer really excited. Now we have 4,000 programmers in the company. This is going to really make 4,000 programmers very happy. We have a problem to solve.