Frequent travelers and those fastidious about upgrade inventory have long used a tool called ExpertFlyer to figure out how many open (and often upgradeable) business class seats are available on any particular flight. It’s a good way to check inventory and build a case before spending thirty minutes on the phone — time well spent for the busy business traveler.

ExpertFlyer’s availability, however, has recently been shrinking thanks to some tight restrictions imposed by the airlines. First United blocked their upgrade inventory from being displayed in October of 2013 — now Delta is requesting that all of their inventory be removed from the service.

Why the surliness? Probably because airlines want sole ownership over access to their inventory. Sharing the data never really did much harm though; conversely it helped travelers save ticketing agents time by aiding in the research process. I guess the load will now fall to the zillions of angry customers waiting on hold.

Nine months after the merger between American and US Airways, one of the biggest potential issues is moving along suspiciously smoothly. Labor unions on both sides are inching closer to integration, a feat that normally can take many years and dollars. Faster integration means a faster return to smoother operations and profitability, and if the airlines can pull this off quickly, the consumers will benefit.

If only the rest of the industry were so lucky. This week Southwest’s labor disputes went to a moderator while a strike by Germanwings was concluded but with remaining issues. Nobody is happy.

American Airlines Group Inches Closer to Post-Merger Labor Integration: Combining more than 100,000 employees into cohesive work groups after an airline merger usually takes several years. But on Labor Day weekend, less than nine months since American Airlines and US Airways completed their merger, union groups at both airlines are on track to join their workforces with new contracts. Read more at Skift

Airports Cope With Passengers Who Forget About Guns in Bags: Who would try to bring a gun through airport security?  Only someone incredibly stupid, say the people who have been caught with weapons in their carry-on luggage at security checkpoints at Port Columbus airport. Read more at Skift

Dubai’s Airport Makes Traffic Gains, Despite Runway Closure: Passenger traffic at Dubai International remained above the five million mark for the 19th straight month in July despite the closure of its two runways for maintenance and upgrading for a period of 80 days. Read more at Skift

As London’s Airport Proposals Battle It Out, Gatwick Argues It’s the High-Tech Hub: As Heathrow, Gatwick, and Boris Johnson’s Thames Estuary airport proposal battle it out in a bid to expand airport capacity for the city of London, Gatwick airport has put its bid for another runway in the forefront, highlighting the airport’s high-tech appeal. Read more at Skift What Tetris and Airline Seat Design Have in Common: It isn’t often we think ourselves as that awkward L-shaped brick from classic computer game Tetris, but fundamentally that’s how aircraft seat designers see us. Read more at Skift

Majority of Americans Are Against Using Knee Defenders on Airline Flights: Majority of adult Americans, about 66 percent of them, don’t want to allow use of such devices, while about 34 percent of Americans think it is fine. Read more at Skift 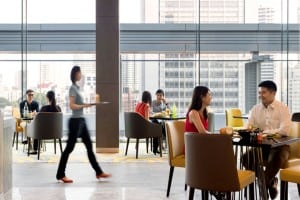 Starwood creates Tap Into Luxury game: SPG has created a new online game called Tap Into Luxury, where SPG members can play to win prizes like free night stays, Starpoints, iTunes gift cards and Ticketmaster cash codes. One grand prize winner will get 250,000 Starpoints to take a dream vacation at any of 1,100 Starwood hotels and resorts across nine brands worldwide, including St. Regis, W, Westin and Sheraton.  Read more at The Points Guy

The Impact of the Sharing Economy on Hotels:  At a hotel industry conference in New York City several years ago, a panel of leading hotel executives was asked whether plucky startup Airbnb was a threat to demand. After some quizzical looks and an awkward silence, one panelist spoke up and admitted he had never heard of the peer-to-peer booking network. His fellow panelists agreed, and the conversation turned elsewhere. Read more at Hotel News Now

If you haven’t seen Paul Thompson’s work on Jalopnik’s Flight Club you should check it out — it’s a great daily dose of airline news and nostalgia.

Can be sent to gm@skift.com and @grantkmartin. We publish the Business Newsletter twice a week on Monday and Thursday, unless Grant is stuck in Wyoming.