Keeping a close watch on market share by revenue and social media presence is key to benchmarking marketing efforts.

Having a larger market share doesn’t necessarily equate to popularity on social.

Delta, Southwest, and United Airlines are in the top half of the U.S. domestic airline market but they don’t have the most followers on Facebook and Twitter.

Airlines are on social media to increase brand awareness and provide customer service. When comparing the totals for the top ten brands on these platforms, a brand’s Facebook following is typically twice that it has on Twitter. JetBlue and US Airways are the only two brands that have a larger audience on Twitter than Facebook.

For airlines, Facebook has been in the business of photo-sharing while Twitter was about customer service in 140 characters and hashtags. As these two platforms compete for attention and take inspiration from each other’s strengths, they become more similar. For example, Facebook’s adoption of hashtags and trends, and Twitter’s incorporation of in-tweet photo-albums and larger copy for popular content.

It will be interesting to see how these domestic airlines’ social media strategy and Facebook-to-Twitter followers spread will change in 2015. For now, this is how they stack up. 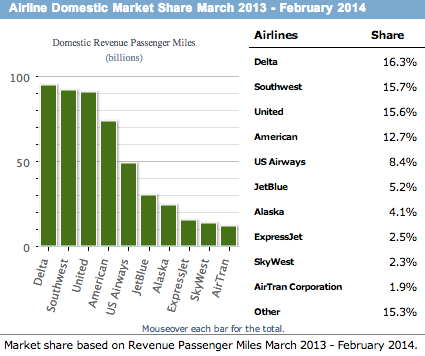 On Facebook, American Airlines leads the pack as the most liked at 4 million. The competition hovers around 750,000 likes, excluding AirTran and ExpressJet’s figures. United, the third largest airline, has only 150,000 likes while JetBlue, Alaska, and AirTran each have smaller market share but higher social visibility.

There is no doubt, JetBlue is aggressive on social media. Also, on a historic tweets/day basis, JetBlue tweets much less than American, Delta, and United, and focuses less on customer service.