Ctrip.com International Ltd. led gains among Chinese stocks trading in the U.S. as the online travel agency forecast a second-quarter revenue gain of as much as 35 percent after exceeding estimates for the period ended in March.

The Bloomberg index of the most-traded Chinese stocks in the U.S. rose 1.2 percent to 99.36 at 1:14 p.m. in New York, heading for its first gain in four days. Ctrip rallied the most since April 8. Qihoo 360 Technology Co., the country’s second- biggest online search engine, fell 0.4 percent. China Telecom Corp Ltd. advanced to the highest since November.

Ctrip said second-quarter sales will range between $263.7 million and $273.8 million. The average estimate of nine analysts surveyed by Bloomberg was $265.1 million. The company has been investing in its rivals to avoid price wars and preserve profit margin. The positive earnings report is helping offset a recent drop in Chinese Internet stocks fueled by concern valuations were too rich, said Cheng Cheng, an analyst at Pacific Crest Securities LLC.

“Good results and guidance, that’s contributing to why they’re doing well,” Cheng said of Ctrip. “The whole sector has been under pressure for a while, so we’re seeing some reversal.”

Ctrip reported revenue of $254.5 million during the first quarter, according to a May 7 statement. The average estimate of 10 analysts surveyed by Bloomberg was $244.6 million. 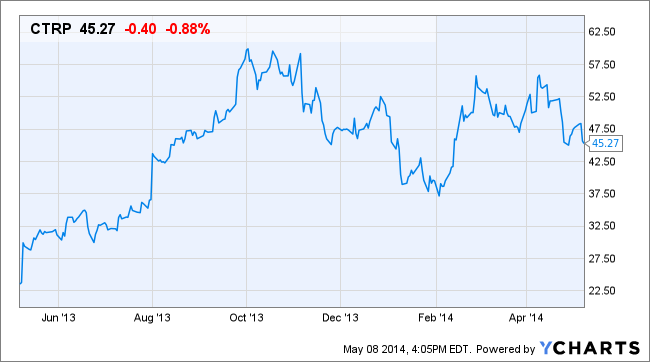