American Airlines Beats Estimates in Q4, Even With a $2 Billion Loss

Many people may be uncomfortable with the sight of a $2 billion loss, but beating the estimates has helped American have a strong response already from the stock market today.

American Airlines reported a $2 billion loss for the fourth quarter because of $2.4 billion in special charges, mostly related to its bankruptcy reorganization and merger with US Airways.

The company said Tuesday that excluding those one-time charges, American and US Airways would have earned a combined profit of $436 million, or 59 cents per share. Analysts, who usually exclude items, were expecting 55 cents per share.

The airlines merged on Dec. 9 as American came out from two years under bankruptcy protection and formed a new company called American Airlines Group Inc., the world’s biggest airline operator.

Tuesday’s results were the first from the company and were complicated by the timing of the merger, two-thirds into the quarter. Official figures included less than one month of US Airways’ operations. The company also gave figures as if the airlines had merged at the beginning of the quarter, and compared those to the separate results of American and US Airways during the same period in 2012.

The combined profit of $436 million, which excluded the one-time restructuring items, compared with a combined loss of $42 million a year earlier.

“The early returns on our merger are very positive,” CEO Doug Parker said in a statement. He said the company expected results to improve further in 2014. 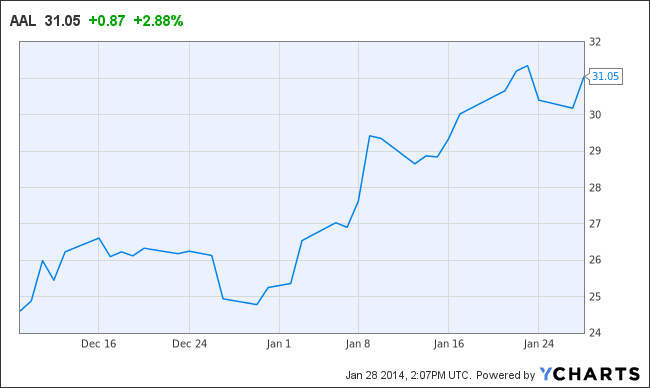 American and US Airways will operate as separate airlines with their own fleets and reservations systems for up to two years before phasing out the US Airways brand.

In trading before the market opened, the company’s shares were up 52 cents to $30.70.