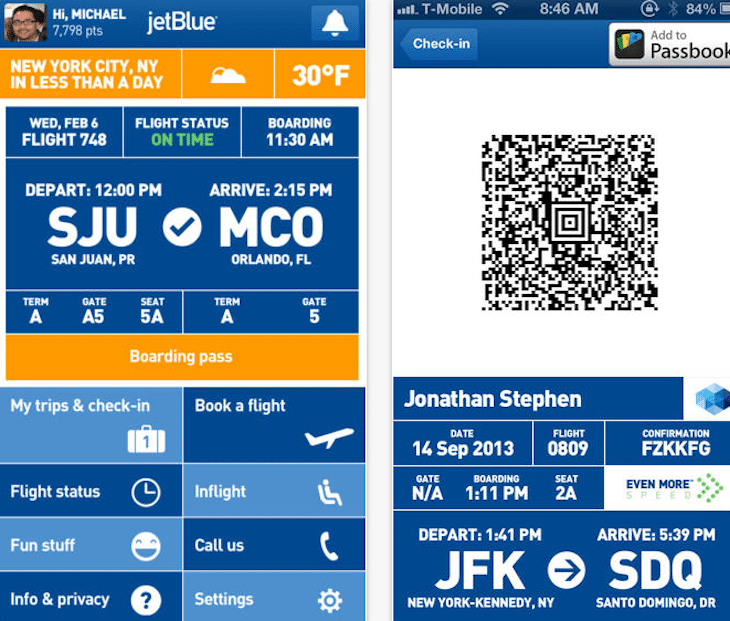 JetBlue really needs to devote more resources to its tech capabilities. It is finally getting around to it with its imminent satellite-based Wi-Fi, but the airline needs to stay on top of its game.

A year-and-a-half after Apple launched Passbook for mobile boarding passes, JetBlue has added the capability for its iPhone-wielding passengers, and the airline did so in a somewhat unconventional way.

Instead of doing most of the Apple Passbook integration in-house, JetBlue used the SITA Mobile Boarding Pass API to implement the feature, which conveniently puts a JetBlue mobile boarding pass in passengers’ iPhone lock-screens when they arrive at the airport.

It doesn’t matter at all to passengers how JetBlue went about implementing Apple Passbook — other than the fact that it came more than a year after many other airlines did so.

But it does say something about JetBlue’s tech priorities and capabilities.

With around 450 airline members globally, SITA provides them with various technology solutions.

Of the mobile boarding pass API, SITA chief technology officer Jim Peters says it is designed to facilitate things for some airlines that “might not have enough resources within their internal IT department to fully enable Passbook quickly.”

JetBlue is one of the first airlines to go live with Apple Passbook using the SITA API. Malaysia Airlines is also using it as are other airlines that SITA declined to identify.

JetBlue has often found itself way behind other airlines’ tech rollouts. For example, JetBlue doesn’t currently offer in-flight Wi-Fi, although its launch of satellite-based Wi-Fi is imminent.

And while JetBlue now supports mobile boarding passes, which were introduced earlier this year, its iPhone app, updated on December 1, still is not optimized for iOS 7.

Still, the airline feels that Apple Passbook will drive greater adoption of JetBlue’s mobile boarding passes, and welcomes the behind-the-scenes assist from SITA in introducing the service.

Photo credit: In JetBlue's updated iPhone app, passengers can choose to add their mobile boarding passes to Apple Passbook for convenient display at the airport. JetBlue