Skift Take
Hertz decreased expectations in September when it lowered its forecast for the year, so any improvement on numbers should be seen as them inching back towards previous performance estimates.
— Jason Clampet
Share
Tweet
Share
Post
Send

Hertz’s third-quarter net income fell 12 percent, stung by higher expenses and a charge related to difficulties surrounding the sale of its Advantage brand. Adjusted results and revenue topped Wall Street expectations, however, and shares edged higher before the opening bell.

Hertz also said that Simply Wheelz LLC, which it sold the Advantage brand to, has not been making the proper payments due under their agreements. Hertz said it terminated sublease contracts with Simply Wheelz on Saturday and is now evaluating its options. Hertz took a third-quarter reserve of $4 million to cover amounts due but not paid as of September’s end. It also recorded a $40 million impairment charge to cover its expected loss on the sale.

Hertz approved a buyback of up to $300 million of its common stock as well. 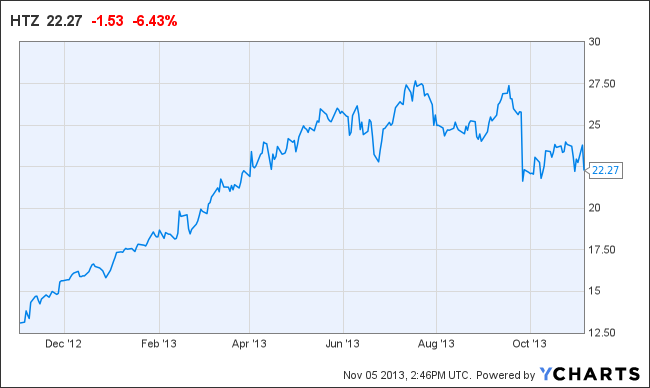 Stripping out the charge and other items, earnings were 73 cents per share.

Analysts polled by FactSet expected earnings of 71 cents per share.