Skift Take
Spirit is proof that you don’t have to treat your customers well or provide them with a quality experience to keeps seats filled. All you need are low, low fares.
— Jason Clampet
Share
Tweet
Share
Post
Send

The shares jumped 10 percent to $37.48 at 11:52 a.m. in New York after reaching $37.71, the highest intraday price since the airline’s initial public offering in May 2011. Spirit had advanced 92 percent this year through yesterday compared with a 19 percent gain for the Standard & Poor’s 500 Index. 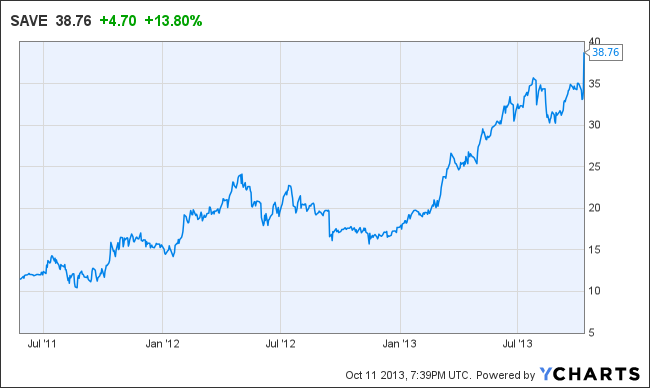 SAVE data by YCharts

Revenue from each seat flown a mile increased as much as 9 percent in the third quarter, the Miramar, Florida-based company said yesterday in a filing. Spirit in September projected growth in the mid-single digit range. Traffic last month also surged 29 percent compared with a year earlier, according to the filing.

The guidance prompted Stephen Trent, an analyst at Citigroup Inc. in New York, to upgrade his rating on the shares to buy from hold. Duane Pfennigwerth, an analyst at Evercore Partners, boosted his price target to $45 a share from $41 and raised his third-quarter profit forecast.

“Results like this should be increasingly hard to ignore and, in our view, Spirit should see multiple expansion over time,” Pfennigwerth, who rates the shares overweight, said in a note yesterday.

Spirit is scheduled to report quarterly results on Oct. 30.