Skift Take
Investors are reacting to the hard line that the Justice Department has appeared to stake out in its lawsuit trying to block the American Airlines-US Airways merger.
— Eliza Ronalds-Hannon
Share
Tweet
Share
Post
Send

Investors who’ve benefited from a string of airline mergers have been shaken by the government’s move to scuttle the proposed tie-up between American and US Airways.

Airline stocks fell for a second day Wednesday after the Justice Department sued to stop the merger.

Investors believe mergers have helped create a more stable, profitable airline industry. Delta bought Northwest in 2008 and United and Continental merged in 2010. With fewer competitors, the airlines have limited the amount of flying they do, which has allowed them to charge more for seats.

For a decade starting in 2001, airlines routinely lost money and filed for bankruptcy protection. Now, most are turning a profit.

The CEOs of both American and US Airways have said their airlines can prosper without the merger. But it’s clear that investors think they would be even better off by combining — and that other airlines would benefit as well.

US Airways shares had more than doubled since it began pursuing a merger with American in April 2012. They’re down 14 percent since Tuesday.

The Justice Department says that American-US Airways would be one merger too many. The deal will reduce competition, leading to higher fares and fees for baggage and ticket changes, the Justice Department wrote in its Tuesday lawsuit. American and US Airways have said they’ll fight the lawsuit and are still hoping to complete the deal.

The merger would have made American as big as Delta and United. Now, it will have to grow its way there, wrote JP Morgan analyst Jamie Baker. He believes that’s likely to mean more flights — and lower profits.

In other airline mergers, the regulators focused on routes that overlapped directly. The Justice Department appears to have made a significant change by considering connecting flights and baggage fees, Baker wrote. “It is difficult for us to imagine how both parties could offer any meaningful regulatory appeasement,” he said.

Investors have reason to hope for a compromise. In January, the government sued to block Anheuser-Busch InBev’s proposed $20.1 billion purchase of Mexican brewer Grupo Modelo. The concerns were settled and the deal closed in June. 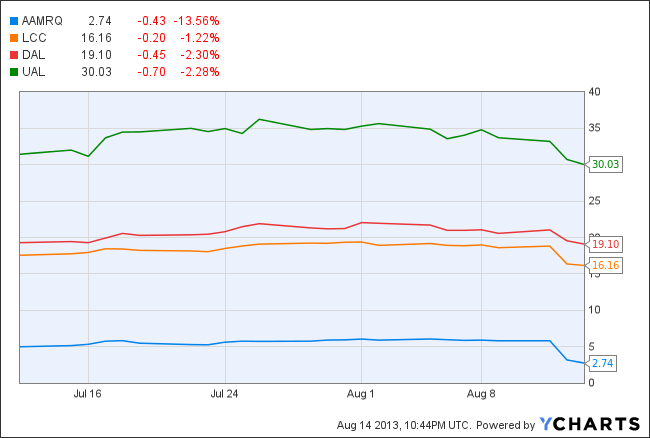