What happens when your pivot goes horribly wrong? 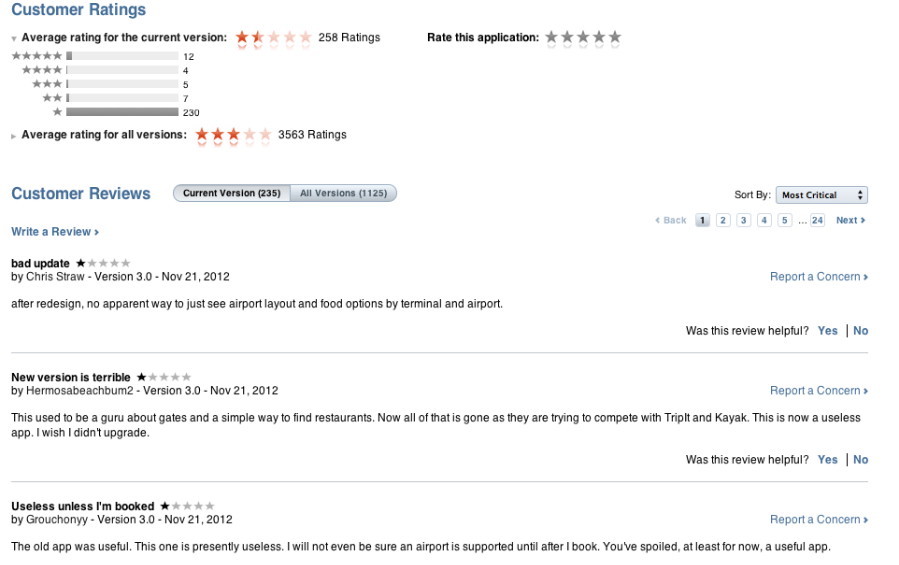 As a travel-focused startup ourselves, this is tough to watch, but heartening in that the company acknowledged its mistakes quickly and is reacting fast.

Travel is among the most pivot-friendly categories in the startupland. What happens when a well-liked-but-limited app, focused on a nice but commodity niche, attempts to pivot into a larger company, attempting to “reinvent travel”? It cannot go worse than what’s happening right now to GateGuru.

The airport gate information app, which first launched in Dec 2009, was quickly hailed as “Yelp for airports” focused on information and reviews on food, shopping and service options, and became a favorite with business travelers. But as it grew and attracted $1.3 million over the years in angel investment from well known tech and media investors, the ambition became larger: to be the travel service of choice for the day of travel. Founder Dan Gellert has been talking about that expansion in vision for the last two years, and with the new 3.0 version of the app launched two days ago, the vision finally to life. But it didn’t bank on two things: one, that TripIt and WorldMate — especially the former — have become the apps of choice for the day of travel, and that expanding vision would need to go way beyond those (“Journey Cards” isn’t groundbreaking, just a nice UI on commodity info). Second, what seems logical to founders doesn’t always seem that to the users and force-feeding your ambition down users’ throats usually backfires: they liked the old but limited and static GateGuru and if they wanted TripIt like functionality, well, they used TripIt for it.

Since the last 48 hours of launch, the reaction to the new version has been brutal, and users have made it very clear, in blistering reviews on in iTunes app store, its Facebook page, tweets and others.

This review below in iTunes store pretty much sums it in terms of details, but among the nicer of the lot:

So much so that the company just wrote a shellshocked blog post outlining what went wrong and how it would rectify it, clearly showing signs of PTSD:

We have received close to a thousand emails, tweets, App Store reviews, Facebook comments and other forms of communication. While we expected a vocal welcome to GateGuru 3.0, we thought it would be overwhelmingly positive. It was not…many other users were clearly and immediately upset at the removal of the ability to search by airport, without entering flight information.

While the negative reaction to GateGuru 3.0 was an incredible disappointment to us, we recognize the need to make things right. So the short of it is that we are working on an update to GateGuru 3.0 that will include the ability to quickly and easily search by airport, without entering any flight information. We hope to have it submitted and approved by Apple in the coming few weeks.
…
At the end of the day, removing the ability for a user to search by airport was too extreme. While pulling in all of a user’s day-of travel information may be the right experience long-term, we need to allow users to have access of their day-of travel information in the way that they want it.

That said, you have to give the company credit for acknowledging its mistakes quickly and promising to rectify those mistakes as soon as possible. Here’s hoping that company gets another shot at the larger ambition; the travel startup landscape is littered with dead and almost-dead companies that pre-supposed consumer behavior in an extremely complex, interconnected-yet-disperse industry, and we could surely use a feel-good turnaround success story.