Skift Take
Add a zipline and a resort is suddenly an adventure destination, but along with the attractive title comes the possibility of accidents that the state plans to keep tabs on to help eliminate unnecessary risks.
— Samantha Shankman
Share
Tweet
Share
Post
Send

As resorts across the country promote ziplines, canopy tours and other kinds of “aerial adventure,” West Virginia has become one of 10 states to impose safety and maintenance guidelines on those rides. 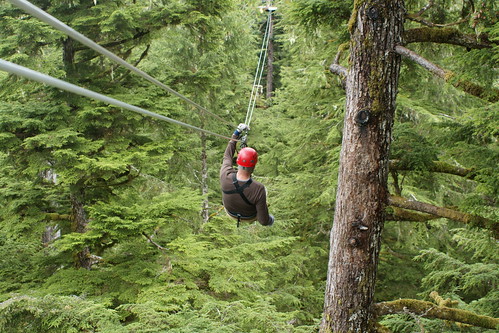 West Virginia is one of the first states to implement specific regulations for ziplines. Photo by Sergio Leenan.

The number of resorts in the United States that offer ziplines, canopy tours or some sort of aerial trekking facility have more than doubled in the past year, according to James Borishade, executive director of the Association for Challenge Course Technology.

West Virginia offers ziplining at 16 resorts, ranking it in the top-10 places in the country for adventure-sport enthusiasts, Borishade said.

Last summer, West Virginia began to regulate safety and maintenance guidelines for those operations through the Zipline and Canopy Tour Responsibility Act.

On June 10, a mother and her young son collided with another zipliner at River Riders in Harpers Ferry because of aguide’s failure to communicate via radio, according to an incident report provided by the state government’s Division of Labor.

The accident left the mother, a Pennsylvania resident, with torn ligaments and tendons in her leg and her son with a facial injury that led to his being tested as legally blind in one eye on the day of the collision, according to the report.

The zipliner with whom the mother and son collided sustained a concussion, the report stated.

“In my opinion, the accident is directly related to an operator error. I do not feel this was intentional or negligent on any party involved, and I believe that a lapse in good judgment and inexperience on the guide’s part [definitely] played a part,” Division of Labor compliance officer Michael Ayers stated in an incident report obtained by the Gazette-Mail.

Two additional accident investigations have been conducted at the TimberTrek Ariel Adventure Park at Adventures on the Gorge in Fayette County.

In one of those incidents, the leg loops of a man’s harness failed, causing him to fall about 20 feet to the ground after being suspended “in a crucifix manner,” according to an incident report.

In the other, a woman zipped too quickly and hit a tree. That incident report stated that she was hospitalized for a shoulder injury.

The operator was not at fault in either of those instances, according to the Division of Labor.

West Virginia law states that zipline operators are liable for injuries or death caused by failure to follow specified duties. However, the law also says, “There are inherent risks in the sport … which should be understood by each participant and are essentially impossible to eliminate by the zipline or canopy tour operator.”

River Riders CEO Matt Knott said his resort sees about 10,000 zipliners each year, and although operators were required to follow ACCT standards prior to the legislation, the new rule acts as an extra safety net.

“Now the state has some government oversight, whereas before [operators] only faced legal recourse from a civil aspect if something happened. We always had outside inspectors coming in for insurance purposes, but now the state has the power to close your operation if they feel it is unsafe,” Knott said. “This more clearly defines the roles of the participants and the operators and keeps just anyone from running backyard operations.

“Most states still have no specific regulations for ziplines. This is safer for everyone.”

Operators also must submit an annual inspection report and application for permit renewal.

More than 1 million people are expected to ride ziplines in the United States this year, according to Borishade. He said his group “stresses the importance of having well-trained staff, annual inspections and updating operating manuals and procedures.”

“Division of Labor compliance officers conduct random inspections at least once a year to confirm the operations are able to document compliance with permits, inspections, employee training and other requirements,” said Catherine Zacchi, spokeswoman for the West Virginia Department of Commerce.

“The permits and certificates of inspection show they comply with safety standards,” she said. “That is good for the adventurous tourist, the individual business and for the industry as a whole across the state.”