More than one in four flights in and out of Heathrow were delayed during the spring as it struggled to cope with bad weather.

The latest figures, released by the Civil Aviation Authority, showed that the airport’s performance had worsened considerably compared with the same period last year.

Planes are classified as leaving or arriving late if they are more than 15 minutes behind schedule.

Heathrow emerged as Britain’s worst performing airport with only 73 per cent of flights arriving or leaving on time. The average delay increased by one minute to 12. 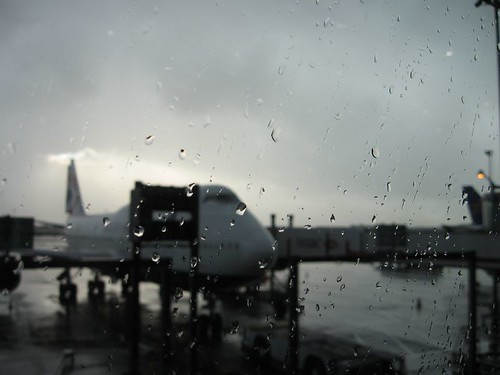 Only 73 percent of flights arrived or left on time between April and June. Photo by Gary Lerude.

This compared with an average of 78 per cent for the country’s 10 leading airports between April and June this year.

The poor performance coincided with a time when the immigration service at Heathrow was in meltdown with some passengers waiting more than two hours to get into the country.

These latest figures will be seen as further evidence of the difficulties faced by Heathrow because of its lack of capacity.

Supporters of the airport’s expansion are urging the Government to reconsider its opposition to building a third runway, which they argue is essential if Heathrow is to maintain its status as a global hub.

The issue of Britain’s hub capacity will be considered by an independent commission, chaired by Sir Howard Davies, set up by the Government earlier this month.

According to the CAA data, Heathrow’s performance dropped by six points, compared with the same time last year, which was the biggest fall among the 10 airports which were monitored by the regulator.

“Passengers are entitled to expect a good value flight that gets them to their destination on time,” said Iain Osborne, CAA Group Director for Regulatory Policy.

These figures show that the majority of passengers using UK airports are receiving that level of service.

“However, the drop in performance for scheduled flights is a warning sign – more can be done, and we urge airports, airlines and air traffic control to work together to reverse this trend, reduce delays and ensure even more passengers reach their destination on time.”

A spokesman for BAA, which operates Heathrow, said the fall in performance was due to heavy rainfall.

“The fall in punctuality at Heathrow earlier this year was due to the exceptionally poor weather from April to June, which was the wettest on record.

“Storms also heavily restricted flight paths around the airport. Heathrow is more vulnerable to poor weather than other airports because it operates at 99.2% capacity – meaning there’s no slack in the system.”

Supporters of a new runway have long argued that its lack of resilience has been caused by the fact that the airport is effectively full.

Earlier this year The Daily Telegraph disclosed that Passengers face greater delays flying into Heathrow than any other airport in Europe.

Figures compiled by Eurocontrol, which is responsible for air traffic control, showed that planes spent more time on the tarmac waiting for clearance to fly to Heathrow than its rivals.