The sleek two-wheeled vehicle is Silicon Alley-approved with smartphone integration and a dropout wonk as a founder, but there’s no mention of road safety or how it’d hold up in a crash.

Now imagine a vehicle that’s smaller than a Smart Car, nearly a third of the price of a Nissan Leaf ($32,500), safer than a motorcycle with a range capacity that just lets you drive and won’t ever tip over? What you get is Lit Motors‘ C-1, the world’s first gyroscopically stabilized, two-wheeled all-electric vehicle, which launched at TechCrunch Disrupt in San Francisco today. 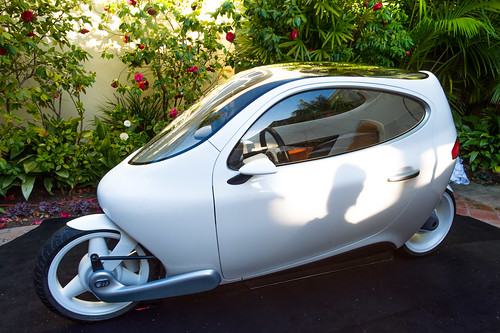 “We aim to be the future of personal transportation,” Kim told me. “By taking our vehicles to the mass market quickly and internationally, we will ease traffic congestion, decrease fuel use, reduce CO2 emissions, create 2,000 to 10,000 green jobs, and allow people to get around quickly and efficiently.”