Britain's rail privatization has largely been a failure as prices have gone up and service has gone down. The differences between Virgin and FirstGroup are minor, then, compared to turning the lines back over to the government.

Sir Richard Branson has urged David Cameron to intervene in the row over the west coast rail franchise and “get some sense” into the Department for Transport, as FirstGroup prepares to sign an agreement to take over the running of the London to Glasgow route.

Branson’s Virgin Trains business is fighting a desperate rearguard action against the loss of a franchise that it has operated since 1997 and has offered to operate the line for free if ministers defer the handover in order to put FirstGroup’s bid under renewed scrutiny. 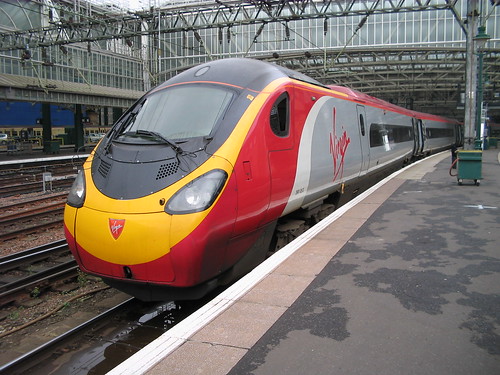 The Virgin tycoon went on the radio on Monday morning in a last-ditch attempt to delay the planned signing of the contract on Tuesday, after which Aberdeen-based FirstGroup will start operating one of Britain’s most prestigious rail services from December.

Speaking on the Today programme on BBC Radio 4, Branson said: “The person that can really intervene to try to get some sense into the Department for Transport is the prime minister and the prime minister is currently on holiday, the chancellor is on holiday and we would like things delayed by a month or so.

“If, as a result of that, it means that the handover is delayed we would obviously be very happy to run it on a not-for-profit basis.”

Branson added that he did not want to see a repeat of the east coast rail fiasco, in which two successive franchisees handed back the keys after making overly optimistic bids. FirstGroup has bid £5.5bn for a 14-year deal, compared with Virgin’s £4.8bn.

Branson said the DfT had not responded to a list of questions submitted by Virgin that queried the rationale behind selecting FirstGroup.

“We’ve asked 40 questions – not one of them have been answered. What we want is transparency. If the figures stack up, we’ll bow out gracefully, we’ll be very happy, we’ve got lots of other things to do, we’ll move on in a month’s time. But what should not happen is, tomorrow, the Department for Transport shouldn’t rush through, get this signed and keep all these facts under cover.”

Virgin’s queries include whether the DfT took into account the “aggressive nature” of FirstGroup’s growth estimates, which predict annual revenue increases of 10% a year.

FirstGroup’s chief executive, Tim O’Toole, has dismissed Branson’s intervention as “histrionics” and argued that the difference between the two bids, over 14 years, is slim. Although FirstGroup has a lower media profile than the Virgin empire, it is a proven transport operator, as the owner of the First TransPennine Express, First Capital Connect and First Great Western franchises.

However, the DfT appears unfazed by Branson’s campaign and contractual talks are continuing with FirstGroup to get an agreement finalised by tomorrow.

A DfT spokesman said: “We note the offer that one of the bidders appears to have made via the press. However, the winning bidder was decided by a fair and established process and no reason has been advanced to convince DfT not to sign the agreement.”

More than 100,000 members of the public have signed an online petition against the decision, prompting Labour MPs to claim parliament had been denied the chance to raise concerns about the deal because it was announced during the House of Commons summer recess.

The shadow transport secretary, Maria Eagle, has written to her government counterpart, Justine Greening, asking for a delay in the contract signing.

She wrote: “The decision appears almost exclusively a ‘bottom line’ one, driven by a particularly high pledge of payments to government.”

She added: “You will know of the history of franchise contracts being brought to an early end, at least in part because of over-ambitious payment promises that proved impossible to realise. There are fears that lessons have not been learnt.”

FirstGroup claims it will deliver better value for taxpayers. It plans major improvements to the InterCity west coast franchise to enhance the customer experience, including improved Wi-Fi and catering, as well as additional services, more seats and reducing standard anytime fares by 15% on average.

Bob Crow, the leader of the RMT transport union, said: “The shambolic handling of the west coast franchise has not only left 800 of our members’ jobs hanging by a thread but has also exposed the chaos right at the heart of the transport department and the insanity of government rail policy, which revolves around a poisonous cocktail of cuts, fare increases and private profits.

“The only sensible solution is re-nationalisation if we are to avoid the anarchy of an action replay of the east coast route collapse.”