In 2007, I met a pilot whose job it was to spray exfoliants on the coca fields that lie hidden in remote valleys the length and breadth of Colombia . His plane and the chemicals he dropped over the high Andean valleys had been paid for by the US State Department, as part of the multi-billion-dollar aid package known as “Plan Colombia”, an ambitious and ill-fated attempt to tackle cocaine production at source. Then, as now, his country was one of the world’s biggest producers of the drug.

Though frustrated by the stubbornness of the coca plant, Lucho was glad of the chance his job had given him to see some of the most beautiful landscapes in South America from the air. He told me that his most memorable flight was from the stiflingly hot town of Barrancabermeja, on the River Magdalena, over the snow-capped peaks of the eastern Andes and down on to the plains that stretch thousands of miles to the Atlantic. “To watch the sun set over a horizon so wide that I could see the curvature of the planet gave me a sense of peace I have found nowhere else,” he said.

I have visited Colombia half a dozen times since my first trip in 1999. Many of my friends in London are baffled by my love of a country that has been wracked by civil war for more than 60 years. It’s true that as recently as 2007 much of the countryside was too dangerous for tourists to visit, but security has improved enormously, and last year I spent nine peaceful months travelling its backroads. 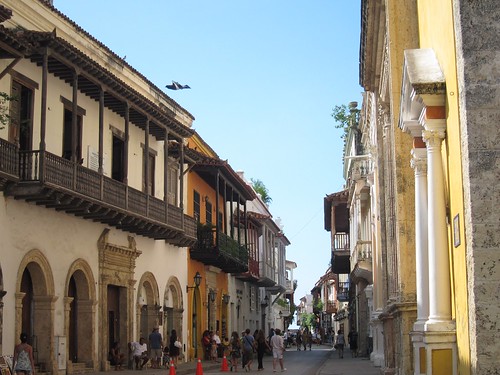 Foreign tourists are wising up to Colombia, thanks in part to the positive publicity generated by the Hay Festival in Cartagena, offshoot of that literary gathering in the Welsh Borders. The number of British visitors increased by 40 per cent in 2011 alone.

They come, first and foremost, for the natural bounty the country has to offer. Packed into a country the size of France and Spain combined are three ranges of the Andes, miles of Caribbean beaches, dense jungles that reach right to the shores of the Pacific, and the might of the Magdalena and Amazon rivers. Measured per square foot, Colombia is the most biodiverse country in the world. It has more species of birds, frogs and orchids than any other country and hundreds more have yet to be classified.

Colombians joke that, when God created their country, He gave it an abundance of natural wonders, and then peopled it with the most obstinate and belligerent people on the planet. The smile and the weary sigh that invariably follow speak volumes, for as well as being one of its most beautiful, Colombia is also one of the most unequal countries in the world. While Colombians are among the friendliest, and most charming hosts you could wish for, no visitor can overlook the poverty, corruption and injustice that millions of Colombians have to endure.

Unsurprisingly, Colombians are keen that foreign visitors see their better side. Medellín enjoys an enviable setting in a spectacular bowl-shaped valley that gives it a spring-like climate year-round. These days, it is also one of the safest cities in South America. When I went back for the annual Feria de las Flores, the only people interested to know more about the drug baron Pablo Escobar were the tourists. All eyes were on the fantastic displays of tropical flowers that the local farmers had brought into the city from the surrounding villages. Many of the bouquets bedecked a seemingly endless parade of beautifully restored American classics from the 1940s and ’50s, part of a vintage car rally that coincided with the fair.

Medellín is also famous for its love of tango, that most Argentinean of sounds. Talking to some ageing tangueros in a bar that night, I was struck by the warmth of a people that have been made to feel like pariahs. Their lingering civil war was another matter, but when it came to the drug trade, they were quick to point out that it takes two to tango. Colombia might produce cocaine, but the business would be nothing without Western drug consumers.

Back in the capital, Bogotá, I spent an evening drinking rum and coke with my friend Ricardo. He explained that Britain had once offered Colombia much more than just a market for its cocaine. Between 1815 and 1820, the British Legion was instrumental in driving the Spanish colonialists from Colombian soil. Indeed, it is said that more Britons died in the liberation campaign than did Colombians.

Ricardo was descended from a Scottish soldier who had journeyed to Colombia with the Legion. The McCormicks, he told me, had built the country’s first iron bridge in the Chicamocha Canyon. The canyon lies in Santander, one of the oldest of the country’s 32 departamentos – or provinces – in a fold of the Andes an hour’s flight north of Bogotá. Until 2002, guerrillas from the ELN – Ejército de Liberacion Nacional, or National Liberation Army – patrolled the mountains around the canyon, but Ricardo assured me that they had been driven out. So I set off for a two-day hike into, and then out of, the canyon.

Ricardo’s ancestors had built their bridge in Sube, a village on the canyon floor. Until 1994, when a tarmac road was built, the only access Sube had to the outside world was along a network of rough stone paths, centred on the bridge and built in the mid-19th century by Geo von Lengerke, a German immigrant and entrepreneur who had come to Santander to grow tobacco.

In his later years, Lengerke was ruined by one of the many civil wars that wracked Colombia in the 19th century. He returned to Germany a broken man, leaving 370 miles of paths that, he wrote wistfully, incorporated “the suffering, hope and uncertainty of all those who walk them”. He also left legions of blue-eyed, blond-haired children, whose descendants still live in the mountain villages of Santander.

Colombia, Lengerke declared, was “a country in which everything remains to be done”, but it was stymied by its leaders, who were “romantics”, “excessive”, and with “no sense of proportion”. Like most Colombians, though, he wasn’t one to dwell on past misfortunes. “Colombia is beautiful,” he wrote, “and it seems it cannot be otherwise.”

The villagers of Sube told me they were confident their country had a bright future, if only its potential could be tapped in a responsible and sustainable way. Lengerke had built wattle-and-daub warehouses to store his tobacco crop. Now that the canyon was at peace, some of the villagers had banded together to convert the warehouses into posadas for the growing numbers of hikers venturing into the canyon.

Some come for the spectacular waterfalls that plunge over the rim of the canyon; others for the birdlife. But the canyon is also home to a fast-growing adventure-sports industry, centred on the colonial town of San Gil, which offers white-water rafting, paragliding and caving. Few of the British tourists I spoke to in Santander knew much about Colombia’s past. But in a country emerging from a tangle of conflicts that have at times seemed nigh on ancestral, perhaps that’s no bad thing.

Tom Feiling’s Short Walks from Bogota: Journeys in the New Colombia, will be published by Allen Lane next week.