Airlines have come a long way from the dark days of the pandemic when idled jets lined runways around the world. On the ground in Tulsa, we check out the meticulous way American is taking its last few aircraft out of mothballs with an opportunistic eye towards summer.

Travel is on the upswing after the depths of the coronavirus pandemic. And despite the possibility of yet another act, U.S. airlines are preparing for what could be a banner summer for leisure travel.

Bookings are up, domestic flights are returning and airlines are recalling and hiring staff in preparation to meet forecast demand. Nowhere is that less evident than at American Airlines’ maintenance base in Tulsa, Oklahoma, — the largest such facility at the world’s largest airline — where many of its 851 aircraft pass through at one time or another.

But since the pandemic began in earnest last March — really since the Boeing 737 Max was grounded in early 2019 — Tulsa has been host to something else: Up to 100 stored aircraft. Planes were parked on taxiways, the ramp, any available space that could fit an Airbus A320 or Boeing 777 was requisitioned at the apex of the crisis.

“We were never in the business of storing aircraft,” Ed Sangricco, who has led American’s Tulsa maintenance base since January, told Skift on a recent exclusive tour of the facility and the airline’s aircraft reactivation line. “Airlines are in the business of flying aircraft, so the storage program was never part of our DNA.”

At the height of the travel downturn, American idled hundreds of jets with startling images of planes lining runways from Pittsburgh to Roswell. Reactivations began around the middle of last year and have continued in fits and starts in line with the travel recovery ever since. Stored American Airlines 737s awaiting work in Tulsa before they can return to service. (Edward Russell/Skift)

With the dark days of the crisis still fresh in his mind, it must have been music to Sangricco’s ears when, in March, American disclosed that it would return “most” of its fleet to service by June. And just last week, executives said the airline will have its entire fleet — more than 1,400 jets including regional affiliates — back in the sky this summer.

That means Tulsa is nearing the end of the line storing and — more importantly — reactivating aircraft. Last week, only five 737s sat awaiting reactivation work with several more jets undergoing the necessary checks inside the hangars on the east side of the airport.

“Heavy maintenance is the way in and the way out, and — fortunately right now — it’s the way in,” said Sangricco on the Tulsa base’s importance both during and recovering from the crisis.

Everything Gets a Check

It takes a village, so to speak, to get a plane back in the sky. Reactivating one 737 takes 1,000 person-hours, or a “good work week” as Roger Steele, the assistant manager on duty in the hanger where American was reactivating aircraft, put it during the tour.

And that’s not cheap. At the median base wage for a maintenance technician at American, labor costs alone are $39,340 to reactivate a narrow-body aircraft. However, that is far less than the average $10 million impairment charge the airline paid for the each of the roughly 150 aircraft it retired as a result of the pandemic in 2020.

It takes American Airlines a week, and nearly $40,000 in labor costs, to put a stored 737 back into service. (Edward Russell/Skift)

Everything is checked and re-checked — from the engines to the baggage holds and even the coffee makers — when an aircraft is returned to service. And when they are done, pilots take each jet out for a verification flight before it is returned to passenger service.

“I don’t care whether you’re talking about something as significant as an engine or the coffee maker, everything on an aircraft has a maintenance program, and [gets] an ops check,” said Steele. Technicians check and double check the engines when a plane returns to service. (Edward Russell/Skift)

Key to American’s reactivation program is avoiding any unexpected fixes when a plane is ready to return to service. Whenever an aircraft is stored for more than a few days, technicians check them every 10 days. These checks take three technicians roughly half a day to complete, and range from rotating tires so that they do not go flat to making sure no wildlife has taken up residence. Technicians must check and rotate tires every 10 days while an aircraft is stored — and to keep black widow spiders away. (Edward Russell/Skift)

“Springtime is the worst,” said Steve Harmening, an aircraft maintenance technician at American, on the tour. “We’re chasing the birds out frequently.”

Technicians in Tulsa have found everything from rodents to owls, possums and even black widow spiders using multi-million dollar aircraft for shelter. And this is even with nearly every port and crevice where a critter could nest covered. Keeping wildlife out of stored aircraft, especially wheel wells like this, is one of the top challenges for American’s technicians. (Edward Russell/Skift)

With all of the checks while a plane is stored, the work when an aircraft comes into the hangar for reactivation focuses on ensuring it is ready to resume flying. All of the same checks are performed, as well as of other systems ranging from the avionics to hydraulics. One every constant concern is making sure nothing is leaking — something mentioned by both Harmening and Steele multiple times on the tour. Asked if this was an issue, they said the concern was more about making sure it was not an issue. All ports and openings are covered while an aircraft is stored. (Edward Russell/Skift)

Onboard, technicians make sure all of the safety equipment is up-to-date and reinstalled as most — like fire extinguishers and oxygen tanks — are pulled off an aircraft while it is stored. Even seemingly innocuous coffee makers are removed and reinstalled. Technicians check, and replace if needed, all safety equipment on aircraft when they return to service. (Edward Russell/Skift)

American is not just rushing jets through reactivation to get them back into service. It is taking something of a two-birds-one-stone approach to planes like the 737 by also using the time in the hangar to accelerate long-planned cabin updates. The modifications, dubbed “Project Oasis” internally, adds new seats to both its Airbus A321s and 737-800s, with the latter going up to 172 seats from 160. Retrofits to the 737s will be done by June, and to the A321s by the end of the year. 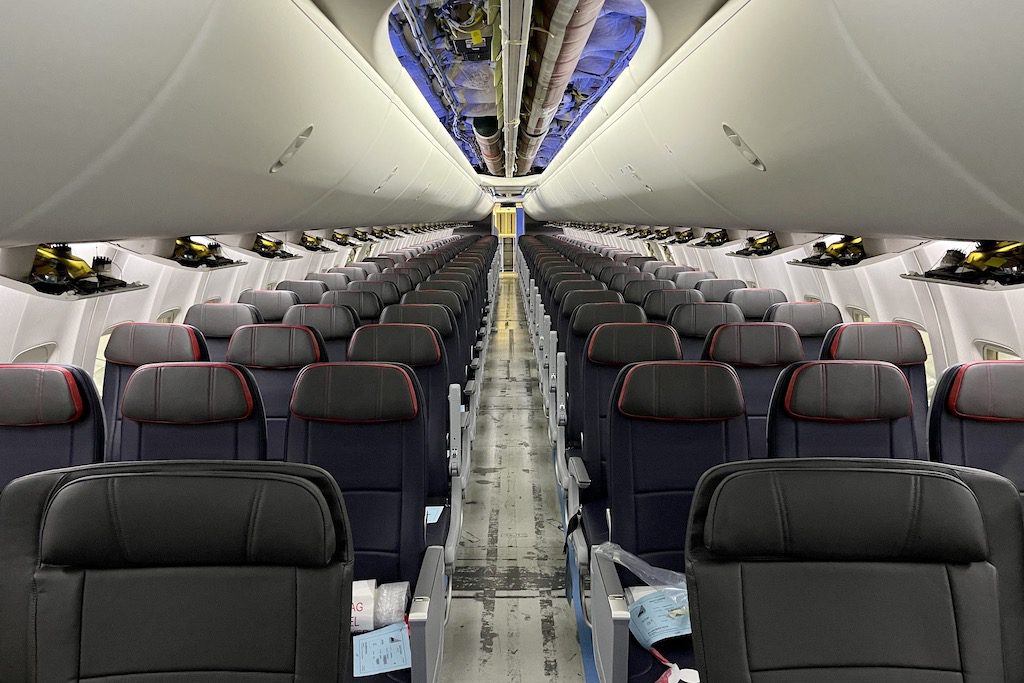 American using the reactivation process to update cabins on its A321 and 737 jets. (Edward Russell/Skift)

A verification flight is the last step in the reactivation process. This involves simulating a real flight as closely as can be done without a full complement of passengers, said American 737 Technical Pilot Captain Larry Toering. Asked what kind of issues could prompt a plane to return to the hangar for more work, he was unable to think of any significant discrepancies that his team has found, citing minor things like cockpit lighting that could bring a plane back to the hangar for a few hours more work. Pilots perform a verification flight before any aircraft returns to service. (Edward Russell/Skift)

Once the reactivation work and verification flights are done, a completed jet will head off to wherever it is needed to begin carry passengers. Often this can mean simply taxing across the Tulsa Airport’s main runway to the terminal, ready to return to service as if nothing has changed in the past year.

“It’s not an accident that you’re seeing these aircraft safely move from flying to storage and back to flying seemingly seamless to the public,” said Sangricco. “It has been a significant, a monumental effort.”

American is bringing its entire fleet back as it prepares to fly 90 percent of its 2019 domestic seats this summer. Other airlines have similarly lofty plans for their schedules as many report net leisure bookings on par with levels unseen since 2019.

But the recovery is not without a big asterisk. Lucrative business and long-haul international travel remains deeply depressed — several U.S. airlines have said numbers are at or below 20 percent of pre-crisis levels — though some recovery is expected after the Labor Day holiday in September. The absence of these travelers handicaps American, and its network peers Delta Air Lines and United Airlines, in the financial recovery from the crisis. Only executives at Delta forecast the airline turning a profit during any quarter this year.

“An airline is a funny organism that getting back to profitability will be a longer road than getting back to the place where it’s better to fly all our airplanes than park them,” American’s Vice President of Network Planning Brian Znotins said recently. This strategy makes “perfect sense” given the market dynamics in the U.S., said Cowen analyst Helane Becker. Though she noted that “all” does not include the aircraft — including Airbus A330s, Boeing 757s and 767s, and Embraer E190s — that American retired last year.

“People hear that flying is safe, they are being vaccinated, fares are rising and things are opening, and they don’t want to miss out — FOMO [fear of missing out] is a very strong motivator,” she said.

For American’s team in Tulsa that is good news. Once they finish reactivating the remaining stored aircraft, they can turn their attention back to the never-ending list of maintenance needs at a large airline. These range from everyday aircraft checks and fixes to major overhauls, known as D Checks, that occur every five years or so. With reactivation work wrapping up, it’s back to maintenance as usual for American’s technicians in Tulsa. (Edward Russell/Skift)

Photo credit: It takes American Airlines a week to return a stored 737 back into service. Edward Russell / Skift