Amtrak Prepares for Close-Up When the Oscars Go Live at L.A.’s Union Station When jet-setting Hollywood chooses a train station, yes, a train station, for its biggest night of the year, you know the rail industry is having its 15 minutes in the limelight. Oscars buzz can be short-lived. Amtrak and its biggest fan at 1600 Pennsylvania Avenue hope that isn't the case this year.

It’s not every day that a sector of travel gets to share the stage — or be the stage, in this case — for Hollywood’s biggest event of the year, let alone the oft-forgotten train industry. But that is exactly what is happening Sunday night as the Oscars ceremony is set to be telecast from Los Angeles’ 82-year-old Union Station, Amtrak’s sixth busiest station.

Union Station, and its stunning Moderne, Art Deco and Mission Revival architecture, was chosen for its spaciousness in this year of Covid-19, officials said. And while stars like Brad Pitt, Frances McDormand, Viola Davis, and Gary Oldman will get lots of air time at the 93rd Academy Awards, the attention of Union Station being on camera for three-plus hours will just add to what amounts to trains in the United States having a moment.

After all, the new president goes by the nickname “Amtrak Joe” for his years of loyal ridership between Washington, D.C. and Wilmington. President Biden has also proposed a sweeping infrastructure bill that includes $80 billion for Amtrak, for everything from much-needed maintenance of existing tracks to modernizing the busy Northeast corridor and connecting new city pairs. A Republican counter to the bill proposes just $20 billion for railways.

Still, that people are actually talking about reviving rail service in this way, rather than lamenting its death, is underscored by new U.S. Transportation Secretary Pete Buttigieg‘s commitment to cleaner transit options. At a time when the pandemic has all of the travel industry reassessing how it can do it better by being greener, rail service is looking like more of a viable option for many travelers — at least, in theory.

Of course, Amtrak, like the rest of travel, was crushed by the pandemic. Ridership was down 50 percent nationwide, consistent with the loss of riders on its Western routes, many of which originate from L.A.’s Union Station. Amtrak in November reported an $800 million loss for 2020 fiscal year. 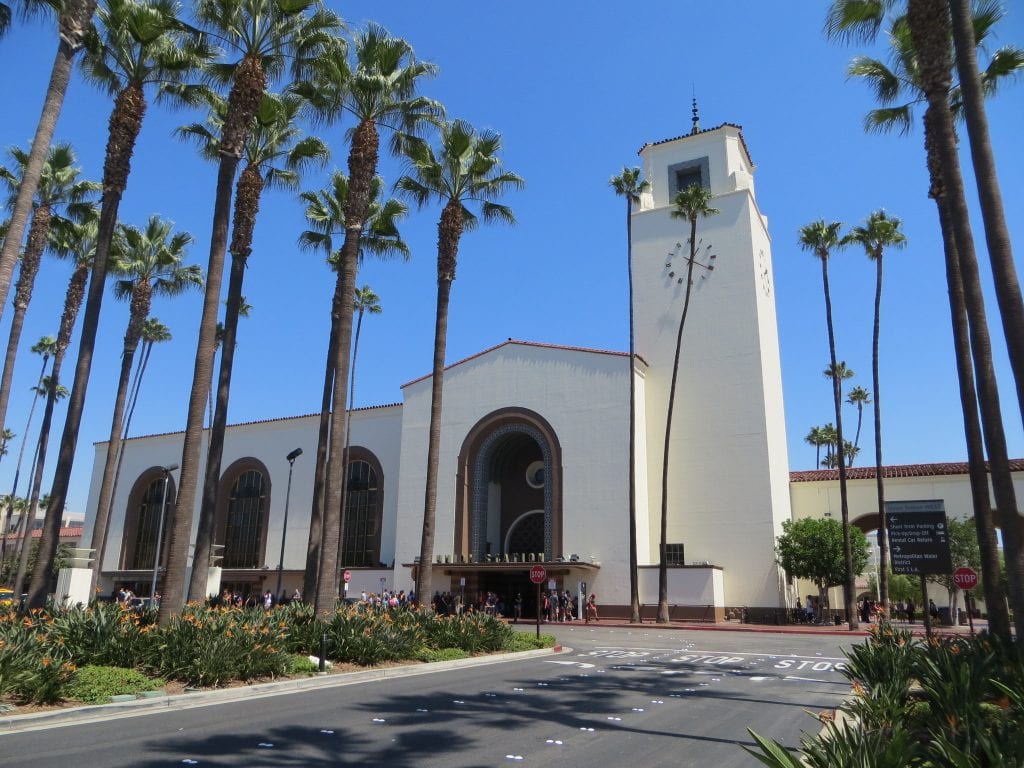 That said, after years of debate around why the U.S. is so far behind having state-of-the-art rail service compared to the rest of the world, officials certainly feel like an inflection point is here. “President Biden’s infrastructure plan is what this nation has been waiting for,” Amtrak CEO Bill Flynn said in a statement recently. “America needs a rail network that offers frequent, reliable, sustainable and equitable train service. Now is our time, let’s make rail the solution.” And even if the Oscars don’t garner big ratings in this second year of coronavirus, you can bet the train geeks will be glued. Hollywood trade publication Deadline reported: “The edifice lent itself to an Oscar show in its ‘enormous scale’ and ‘oxygen,’ allowing ‘horizontal scale and vertical sweep.’ Essentially, the old ticket-counter room at Union Station will house the main stage. The north and south patios with jacaranda trees will be used for the pre- and post-show.”

Oscars production designer David Rockwell told Deadline “the room will be used 360. There will be camera positions picking up action throughout the room.”

Amtrak is hoping a little of the glitter will shine its way as it prepares for an unprecedented year ahead.