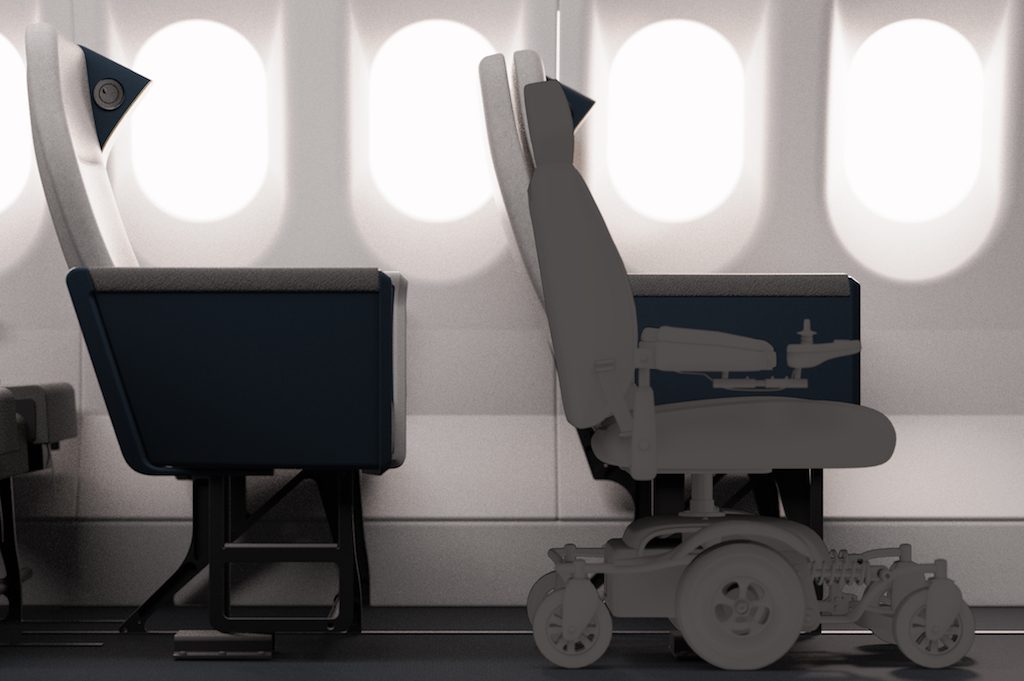 Passengers traveling with wheelchairs are a billion-dollar industry often ignored by the airlines. Most passengers with disabilities plan trips with friends or family, with the determining factor being the ease of accessibility for wheelchairs. Trains and buses can accommodate. Airlines are long overdue.

A new airplane seat prototype called the “Freedom Seat,” offering passengers with restricted mobility the ability to fly seated in their own wheelchairs, is making the rounds quietly within the airline community in a quest to become the first certified wheelchair in-flight seating.

The brainchild of an undisclosed major airline and Hank Scott, CEO of Denver-based Molon Labe Seating, the Freedom Seat is a wider economy aisle seat that slides over the neighboring chair leaving open a space for a wheelchair to securely lock into place.

The size of the potential market that such an innovation would assist is growing. A market study released by the Open Doors organization shows that 27 million U.S. travelers with disabilities took a total of 81 million trips and spent $58.7 billion on travel in 2018-19, up from $34.6 billion in the prior 2015 study.

Scott is enthusiastic and hopeful for certification of not only the Freedom Seat, which at the end of the day is an airline seat, but also the other related accessible in-flight seating devices, including the docking system and restraints. He’s also said that he’s hopeful that Federal Aviation Administration-approved wheelchairs make life better soon for passengers with disabilities.

But there lies the challenge: the FAA. The agency must review stringent test results of the seat as a precursor to consider certifying it for use. That certification is needed before Scott has a chance of being able to sell it to airlines.

Pitching the Freedom Seat is only one part of a very complex project. While some experts believe it may take years to have airplanes fully fitted to accept passengers flying in their own wheelchairs, disability advocates, airlines and industry experts continue working together to improve accessibility while maintaining rigid safety standards.

But without precedents for testing, research, development or funding, it continues to be a challenge.

If certified, the Freedom Seat could be a game changer for the airlines and the answer to the dignified flying that disability advocates and the Air Carrier Access Act (ACAA) have long championed for.

To fully understand what passengers with disabilities deal with when flying, imagine yourself in a power wheelchair, having to fly from New York to San Francisco. After checking in, getting through security and arriving at your gate, you’re only halfway there. You still have to get from your wheelchair into the plane.

Depending how long it takes you, as you make your way through the terminal and maybe a bathroom stop, it’s entirely possible that you may or may not make it to the boarding gate in time to pre-board.

And herein lies the basis for a myriad of issues disability advocates point to resulting in a lack of accessible travel for passengers, particularly for anyone who uses a wheelchair having to board a flight with other passengers already on board.

Traveling by air is “undignified,” said Chris Woods, founder of FlyingDisabled and the father of two young adults in wheelchairs. “It doesn’t matter if you’re my daughter’s age, which is 28, or you’re 88,” he said. “You still have to be manhandled out of your wheelchair into an airline seat, which is generally not suitable.”

The manhandling Woods is referring to is in the transfer from a wheelchair to an aisle chair — a very narrow wheelchair that fits within the confines of an airplane aisle — to the airplane seat. But there’s also a safety component to this.

Lee Page, senior associate advocacy director for the 15,000 Paralyzed Veterans of America (PVA); said: “My backside is 18 by 18, sitting down and I’m six-foot tall and 200 pounds. I would transfer into this aisle chair, which only has a 14-inch seat. And now I would be strapped into it with seat belts and belts around the shoulder straps coming over the top.”

“But it’s such a narrow apparatus, and there’s no means for me to put on brakes, or to propel it. It easily turns over, you can easily fall out of it. It’s not a very safe apparatus,” he added.

Page, 57, a quadriplegic who often has to dehydrate himself prior to flying to ensure he doesn’t need to use the restroom in-flight, said there is a lot of physicality involved in transferring passengers with disabilities to their seats and that the people doing the lifting have not been trained for this appropriately.

However, both Woods and Page agree that while the Freedom Seat might not be a savior, it is a start. It would cut out a middle process of boarding and reduce the damages to wheelchairs stored haphazardly in cargo— some costing as much as $45,000 for customized wheelchairs, and an inconvenience for passengers with disabilities relying on their chairs.

In fact, Page believes having the ability to fly with your own wheelchair would entice many of the PVA members to trade in road trips for flying to their destinations if they no longer risk damaging their wheelchairs.

For his part, Molon Labe’s Scott has been working closely with a variety of stakeholders including disability advocates like Page, Woods and All Wheels Up, a Texas-based nonprofit that has been working for the last 10 years to fund and crash test wheelchairs and wheelchair securement systems for commercial airlines.

“We learned that the wheelchair securement systems that are on buses and trains today do pass a 20G crash test, and so we took this information to the FAA, and after months of trying to work with the FAA, they just said, you know this isn’t a project that we can get the money for,” said Michele Erwin, president of All Wheels Up.

Although there weren’t any other organizations even thinking of throwing a wheelchair down an FAA-approved crash test facility shuttle, the mother of a teenager with reduced mobility was not deterred.

There wasn’t even a sled that would hold a wheelchair to allow for the testing, but after designing and building one, the first tests in 2016 proved it’s possible for there to be a wheelchair spot on airplanes, and the customer in that wheelchair would survive, Erwin said.

The FAA has indicated that they will consider an exemption on wheelchair crash testing, Scott said.

While the FAA generally does not discuss any ongoing work with manufacturers and wouldn’t confirm or deny working with Molon Labe or anyone else in the accessible flying space to certify wheelchair seating on planes, they did issue a statement.

“Manufacturers must demonstrate that any seat or locking device would meet all FAA seat certification regulations, including being able to withstand a force of 16G in the event of a crash,” said Emma Duncan, an FAA spokesperson.

In order to do testing in a cabin environment, Scott has partnered with Boeing to test a variety of things from the docking system to getting around corners and working with disability advocates to point out things that may not be obvious to them but important to someone in a wheelchair.

A Boeing spokesperson said a small team of Boeing engineers will help explore wheelchair accessibility issues in the cabin. “The focus of our assessment with Molon Labe will include exploring maneuvering restrictions, space limitations and other design considerations using our airplane mock-up environment,” said the spokesperson.

While not providing funds, Boeing will provide an airplane mock-up environment and a small team of engineers to explore wheelchair accessibility issues in the cabin and Molon Labe will provide the prototype.

Scott said testing will happen in mid summer and the assessment with Boeing will help Molon Labe define the exact dimensions required.

Molon Labe’s Scott points to a study being conducted by The National Academies of Sciences, Engineering, and Medicine (NASEM) and Transportation Research Board (TRB) on the feasibility of wheelchair restraint systems in passenger aircraft as a good sign.

The study, sponsored by the U.S. Access Board and falling within the 2018 FAA Reauthorization Act, is looking at problems faced by people with significant disabilities who use wheelchairs when flying, said Dr. Melissa Welch-Ross, study director for the Transportation Research Board.

The final report is expected to be ready for review in September.

While All Wheels Up’s Erwin believes that the Freedom Seat will be in planes some day, she said there’s still a lot of work to be done in fully certifying the wheelchair lockdown and the wheelchair itself.

Whatever the future holds for accessible in-flight travel, while not a certainty, it is closer than it’s ever been before.